The Fall Student Showcase for Research and Creative Inquiry was held on November 16 and featured more than 250 student presentations from class research and independent research projects. Blackwell Ballroom was buzzing as four hour-long poster sessions rotated throughout the afternoon as students presented their research. Elsewhere on campus presentations took place in Rotunda classrooms, the CSTAC Lab Theater, Molnar Recital Hall and the Bedford Atrium.

The showcase featured a mix of poster presentations, oral presentations, performances and visual arts displays from undergraduate and graduate work. Conducting student research is a hallmark of a Longwood education, whether it takes place in a chemistry lab or a dance studio. Undergraduates who undertake research gain confidence to work independently, experience in working collaboratively and develop better communication skills.

[Find out more about student research opportunities at Longwood.] 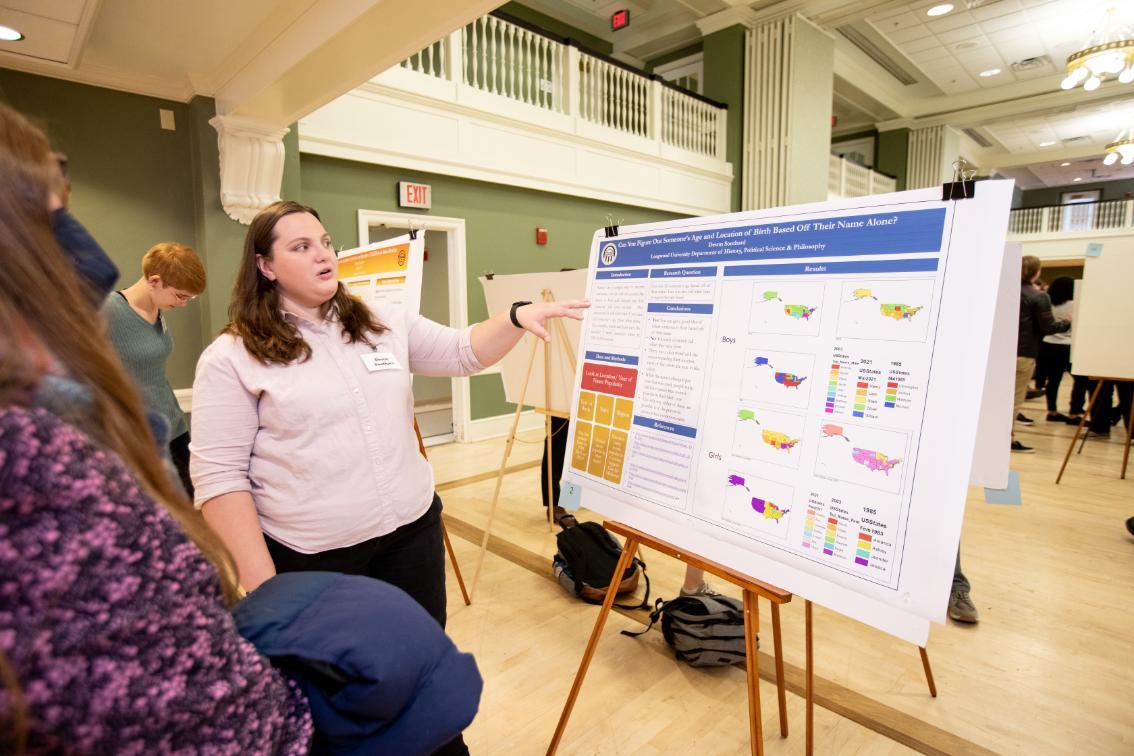 1. Popular names can be linked to geography.

Devon Southard ‘25 researched whether it was possible to figure out someone’s age and what state or region they are from based on their name. She found that it is possible to get a good idea of where someone is from based on their name, but that you can’t accurately tell when they were born. She found a clear trend with names based on the location of where someone lived. For example, in 1985 the name Ashley was much more common for babies born in the Midwest and most of the South. But Jessica was the most popular name given to babies born in the western half of the United States and New England.

“Can You Figure Out Someone’s Age Based Off Their Name Alone?”
GEOG 275: Intro to Geographic Information Systems (Dr. Chris Labosier) 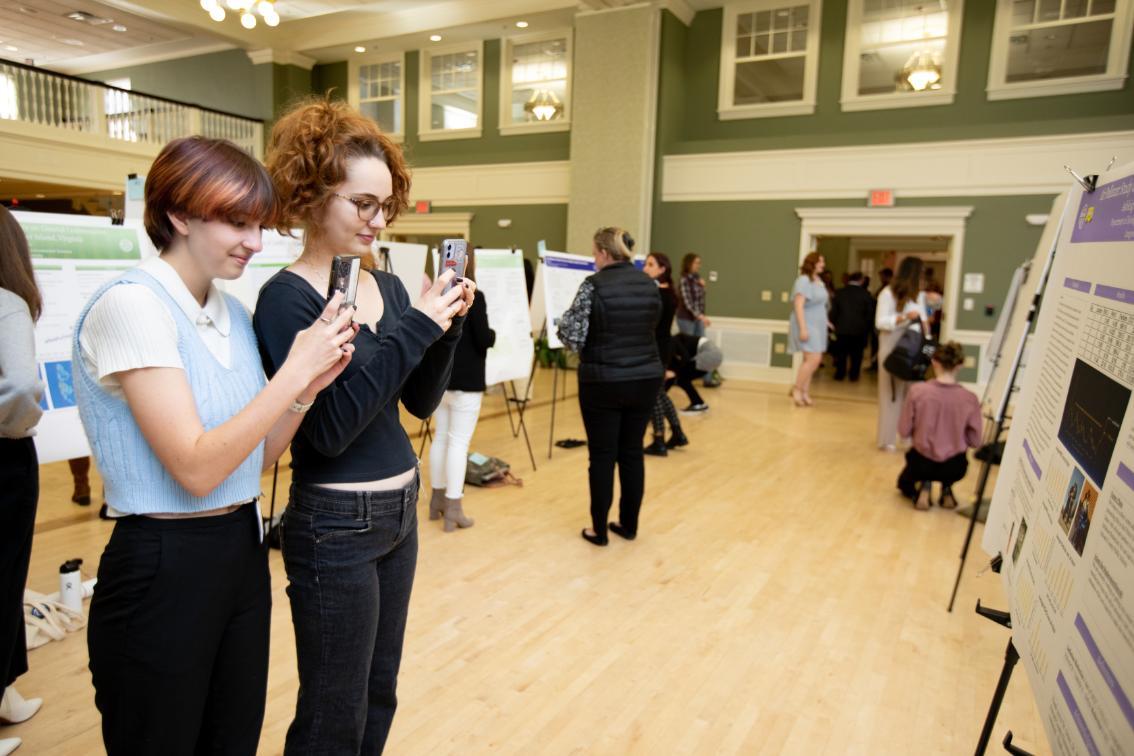 Ashleigh Mann ‘26 and Sarah Lacy ‘26 collected measurements of carbon dioxide, particulate matter and formaldehyde in the bus drop off and pick up area of Prince Edward County Elementary School. They analyzed the data and found that the buses are releasing a substantial amount of air pollution, which could adversely affect the children who rely on the buses for transportation but also the greater Farmville community since it contributes to a greenhouse effect and global temperature increase. Research has shown that switching from carbon or diesel-based buses leads to a decrease in harmful pollutants and the Inflation Reduction Act contains funding to help localities upgrade to more energy-efficient buses. They plan to present their findings to administrators at PECPS.

3. The laws of physics have not been repealed

In this world of rapid change, it’s comforting to know some things stay irrevocably the same. Take Sir Isaac Newton’s laws of motion, which were first published more than 300 years ago. Eric Chorba ’25, Ethan Pettyjohn ‘25, and Kevin Warunek ‘25 put Newton’s second law to the test and found it rock solid. Chorba’s experiment showed that when two small carts collided, their motion/energy was, indeed, conserved. 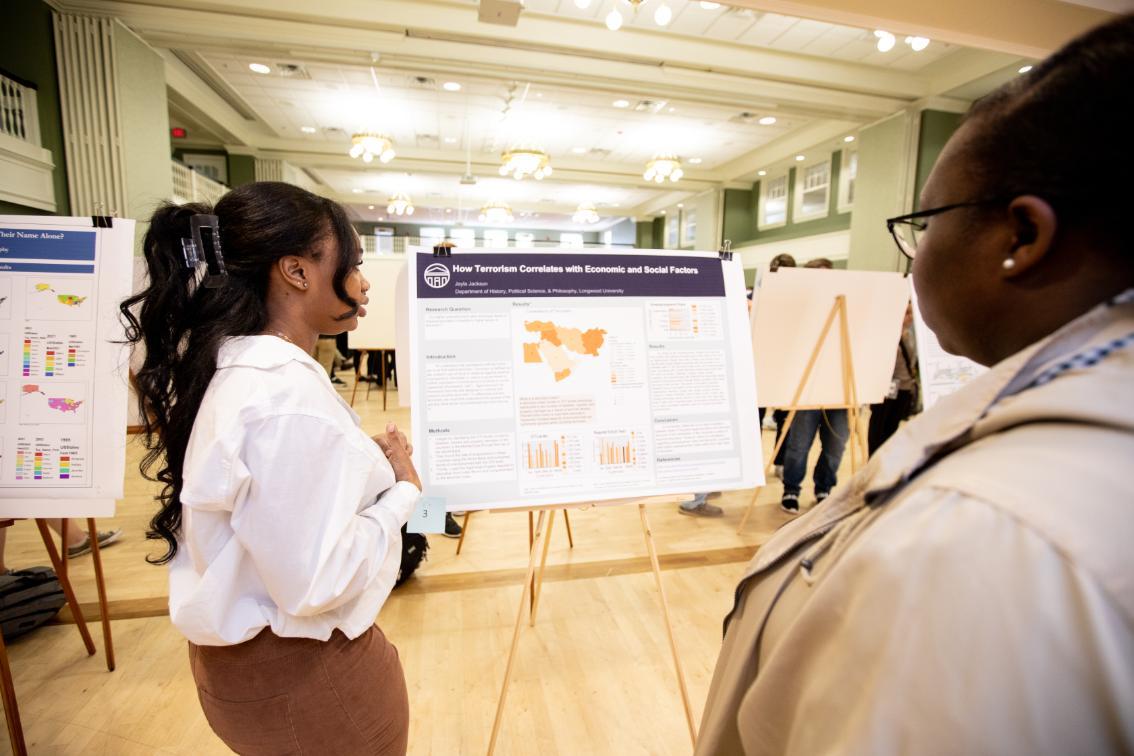 Jacob Strader ’24 discovered through his research that German soldiers who were psychologically unable to withstand the traumas of World War I received little sympathy from the German government. Many of these “shell shock” veterans were denied their military pension benefits by those in power after the war, making very appealing the Nazi Party’s promises benefits would be restored along with respect for the veterans’ service. But it was not to be. Shell shock sufferers were ostracized, treated as malingerers and labeled as mentally ill, with many of them sterilized as a result.

“Shell Shock in the First World War”
HIST 407 & HIST 414: Seminars in the United States and European History—World War I 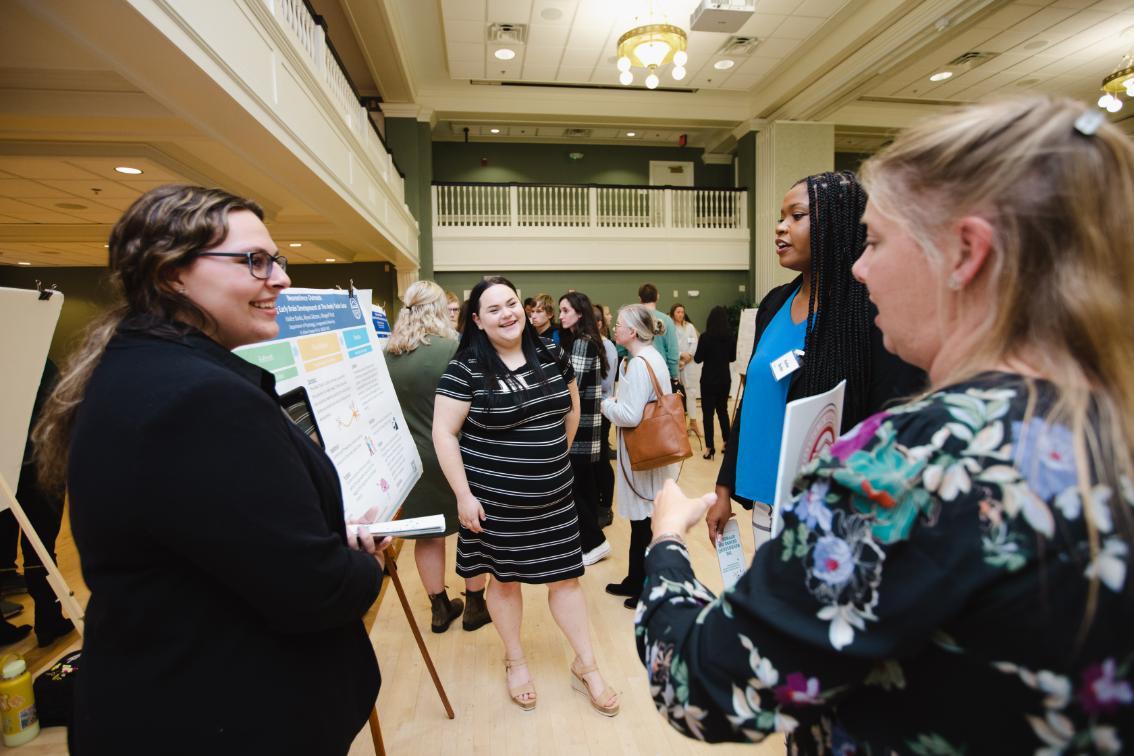 6. The importance of neuroscience at the Andy Taylor Center.

As part of their neuroscience outreach project Hailee Banks ‘23, Abagail Pack ‘23 and Alyssa Gibson ‘23 developed and refreshed marketing materials for the Andy Taylor Center. They created new informational slides for the center’s entryway and a brochure to help educate current and prospective parents about why the teaching methods used at the center are beneficial to early childhood brain development. They focused on the neuroscience behind the Reggio Emilio approach used at the center.

“Early Brain Development: What services should you look for in childcare?”
NEUR 405: Interdisciplinary Neuroscience Applications 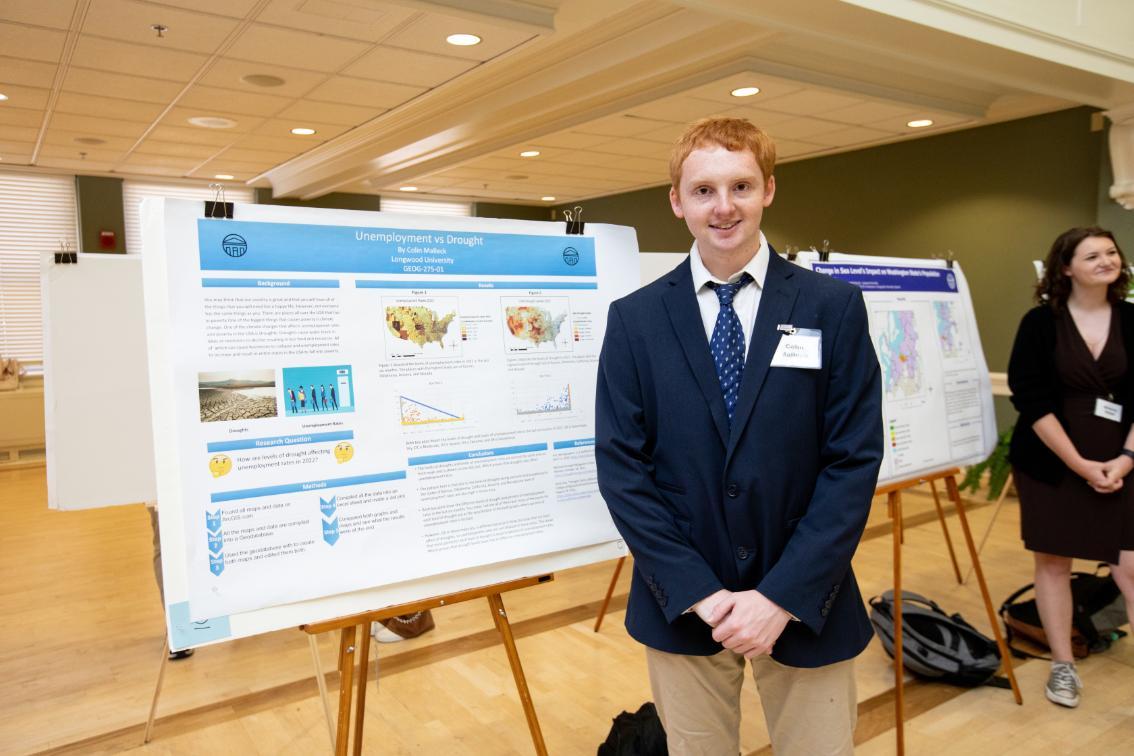 7. Climate change is impacting unemployment rates in the U.S.

Colin Malleck’s ‘25 research project sought to determine if there was a correlation between drought levels and unemployment rates in the United States in 2022. Using GIS, he collected data and maps and complied them into a Geodatabase that he used to make a dot plot. He determined that drought does impact unemployment rates. His research found that the level of drought was extreme in Kansas, Oklahoma, California, Arizona and Nevada and the level of unemployment was also high in those states. 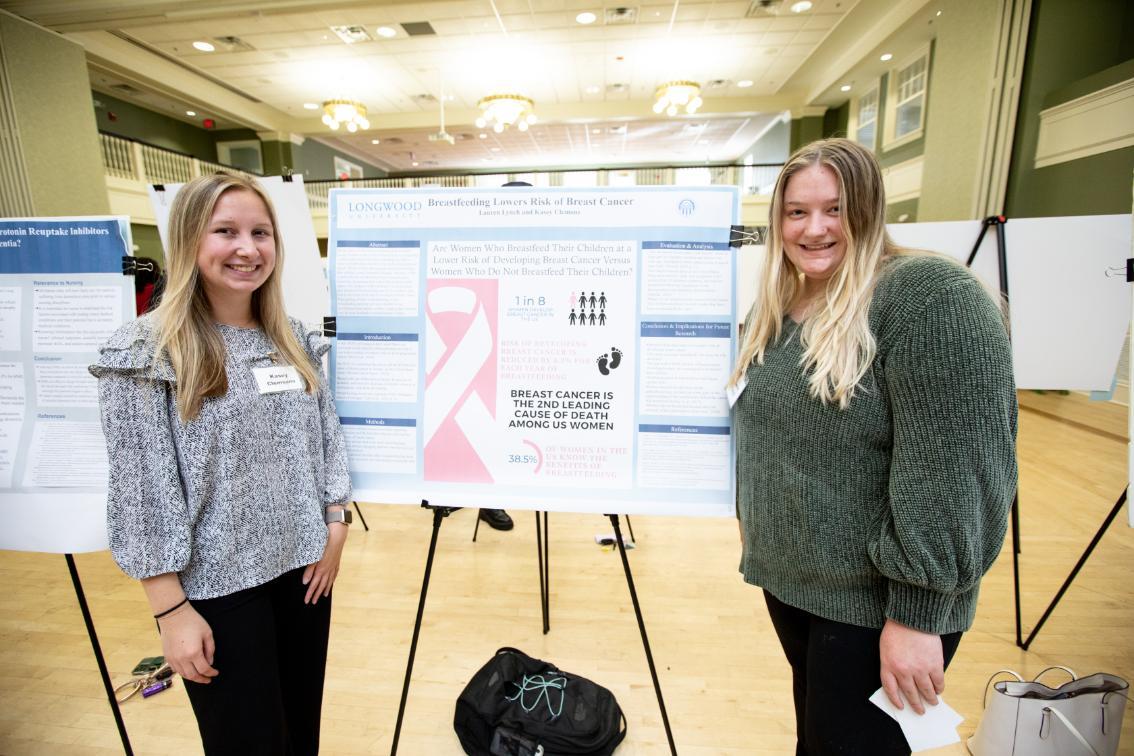 8. Women who breastfeed their babies have a reduced risk of developing breast cancer.

It’s fairly well-known that breastfeeding is generally good for babies. Less well-known is that there also is a health benefit for their mothers. Kasey Clemons ’24 and Lauren Lynch ’24, both nursing majors, are concerned that new mothers may not know their risk of developing breast cancer can be lowered if they breastfeed their babies—and that benefit increases with each child they breastfeed. One reason is that breastfeeding reduces exposure to estrogen, and high levels of exposure to estrogen is a risk factor in developing breast cancer, they said.

“Does breastfeeding help to lower the risk of developing breast cancer in childbearing women, compared to women who do not breastfeed?”
NURS 360: Introduction to Research and Evidence-Based Practice (Dr. Jennifer Hutchinson)

9. “Sex Sells” was a lesson advertisers learned early and used widely during World War I.

Long before Sports Illustrated’s swimsuit editions or even the controversial “Fly Me” airline ads of the 1970s, advertisers had figured out that sex sells. Case in point: World War I propaganda posters encouraging men to enlist in the Navy that feature a provocatively dressed woman and a slogan full of sexual innuendo. Hailey Belote ’23 unearthed that poster and several others in the course of her research. Interestingly, posters that targeted a female audience also used images of women, but in those posters they were depicted more in the roles of mothers or as protectors of the men overseas.

“Shell Shock in the First World War”
HIST 407 & HIST 414: Seminars in the United States and European History—World War I 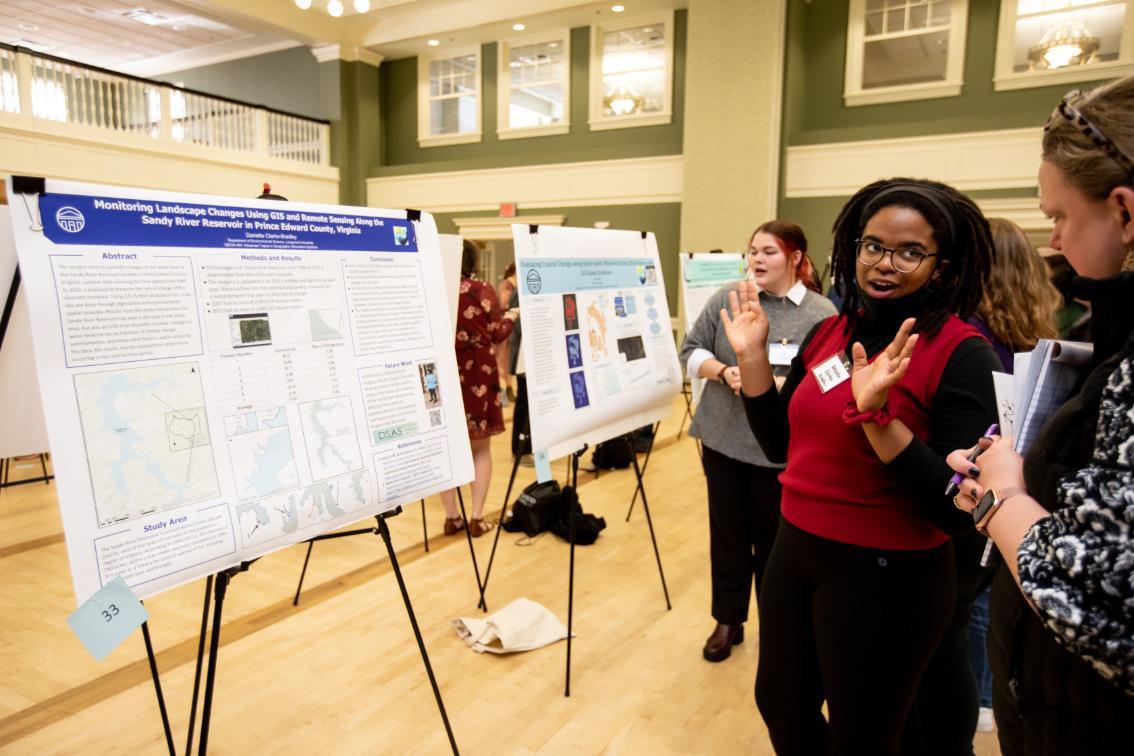 10. What can the Sandy River Reservoir shoreline tell us about climate change?

Changes in water level can be an indicator of climate change. Danielle Clarke Bradley ‘24 set out to analyze the water level of the Sandy River Reservoir in Prince Edward County. Her study found that from 2007 to 2019 there was a decrease of 63,826 square meters in water area. However, between 1994 and 2022, the reservoir saw a .92 m/yr shoreline increase, which may be attributed to increased sediment input due to farming and construction and/or drying conditions due to atmospheric warming.