It’s becoming quite a habit for Communication Studies students: graduate in May, win an Emmy a few months later.

The latest winner of the famous gold statue is Makayla Jennings ‘22, who is now a producer with WDBJ7 in Roanoke. Her film, The Tall Black Stranger: Revealing the Truth of the American Cowboy won the 2022 non-fiction long form documentary category.

Dr. Stouffer pushed me through the entire process, believing in me when I had moments of doubt. His counsel and advice made the finished product much better.

“It’s a wonderful feeling to have your creative work recognized, especially when it’s rooted in something so personal,” said Jennings. “When I found out, I was living with my grandmother and we both cried because it was such a special moment.”

The roots of the documentary lie with Jennings’ late grandfather, who loved cowboy films and passed on that affection to his children and grandchildren. As Jennings investigated the topic, she found something unexpected: the original cowboys were Black, not white.

During production, her travels took her from Houston to film at the Black Cowboy Museum to Maryland for an interview with a member of the group Cowgirls of Color. At each stop, she found that the cowboy culture is baked into the larger Black experience in the American South–something her grandfather felt.

As the piece came together–during too many all-nighters to count–there was something that Dr. Ryan Stouffer, associate professor of communication who taught the class that Jennings was filming for, saw.

It’s a wonderful feeling to have your creative work recognized, especially when it’s rooted in something so personal.

“He told me it was missing me,” said Jennings. “And he was right, it’s such a personal story about my journey toward finding out something about my family history–it all came together when I recorded my voice and my words for the project.”

The documentary also features Jennings’ brother, Bryson, who promises at the end of the documentary, “I’m going to keep building myself up to be a Black cowboy as the years go on.”

The Emmy is a great cherry on top of the project for Jennings, but she said it was the work and relationship she built with Stouffer that was the real reward.

“I found out that I could take on a huge production like this and actually see it through to the end and be proud of the work,” she said. “That gave me a lot of confidence and inspires me to continue to find ways to be creative in my work and in my life. Dr. Stouffer pushed me through the entire process, believing in me when I had moments of doubt. His counsel and advice made the finished product much better.”

“Makayla was one of those perfect students that a professor dreams of,” said Stouffer. “She always showed up with a positive attitude and was seeking to improve. Her documentary stood out among her peers and I’m not surprised it earned her an Emmy Award. It’s well-deserved and she has great things in her future.”

Jennings is the second straight Lancer to win an Emmy Award from the National Capital Chesapeake Bay Chapter of the National Academy of Television Arts & Sciences. Sam Chase ‘21 won in 2021 in the short-form documentary category. 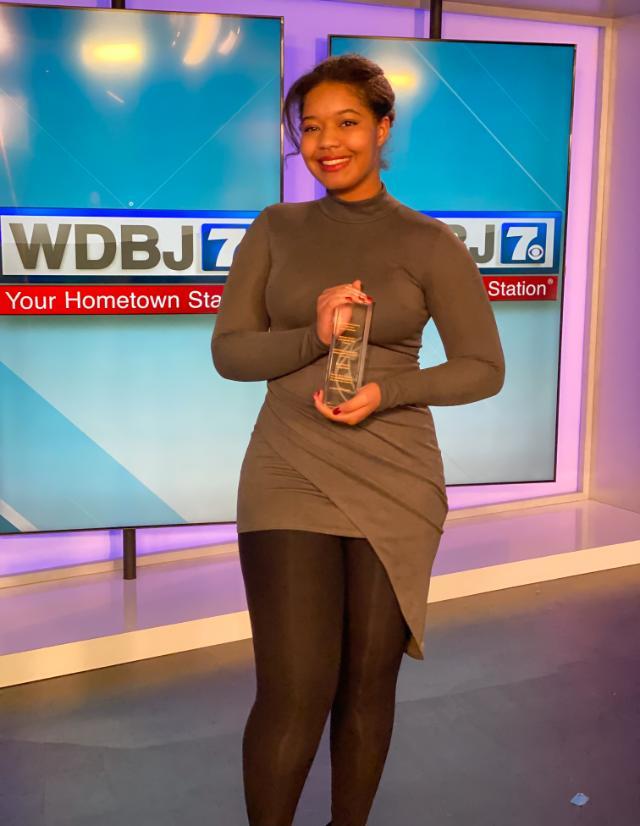