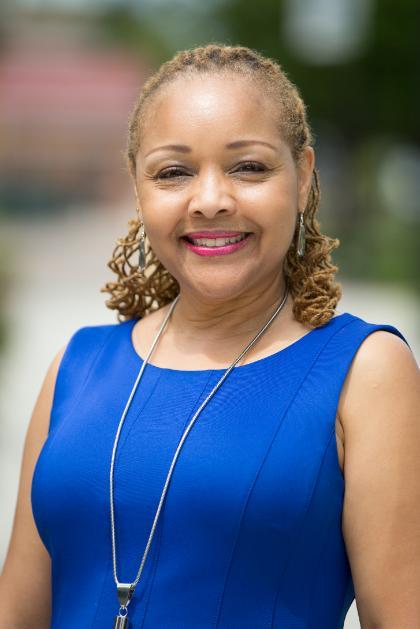 Lisa Edwards-Burrs has earned degrees in Vocal Performance from Virginia Commonwealth University in Richmond, Virginia, (B.M. and M.M.) and The Catholic University of America in Washington, D.C., (D.M.A.). An accomplished lyric-coloratura soprano, her performances in recital, oratorio and chamber music are extensive. Her operatic roles include: Musetta in La Bohème,  Donna Elvira in Don Giovanni, Adele in Die Fledermaus, Athena in The Furies, Ola/Harriet Tubman in Vanqui, Blanche in Dialogues of the Carmelites, Monica in The Medium, Despina in Così fan tutti, Treemonisha in Treemonisha, Adina in L’elisir d’amore and Poppea in L’incoronazione di Poppea.

Dr. Edwards-Burrs has appeared in the concert series of several universities and was chosen by the United States Information Agency to serve as an Artistic Ambassador, resulting in a tour of South America for five weeks with pianist Melanie Day, performing recitals, conducting master classes and making television appearances. She has also given concerts for symposiums at the International Conference for Moral Rearmament in Caux, Switzerland. As a part of the Amalfi Music and Arts Festival based in Vietri sul mare, Italy, Dr. Edwards-Burrs performed in several concerts of arias and opera scenes and as Sister Genovieffa in Suor Angelica in several cities, including Cava, Salerno, Porcini and Amalfi.

Her concert and recital performances of the works of African-American composers and other contemporary works have received critical acclaim.  Projects include performances as Alice in the opera Lyrics of Sunshine and Shadows and Violets and Other Tales by composer Steven M. Allen and in a documentary about the poet, Paul Laurence Dunbar.  In February 2018, she performed at the 20th Anniversary of the African American Art Song Alliance Conference at University of California at Irvine and will attend the 2022 conference in October, performing works of Dorothy Rudd Moore and Rosephanye Powell.

She has received several awards including the Carson Silver Medal and monetary prize from the American Traditions Competition of Savannah! Onstage and Outstanding Vocalist of the Year from Richmond Magazine.  In addition, she has performed for such dignitaries as Secretary of State Madeleine Albright, Senator John Glenn, baseball great Cal Ripkin, international economist Dr. Fareed Zakaria and the late blues guitarist and singer, B. B. King at the Richmond Forum.

Internationally, her appointment as an Artistic Ambassador for the United States to South America with pianist Melanie Day resulted in a five-week concert tour, several master classes and television appearances.  Additionally, she has performed at the International Conference for Moral-Rearmament in Caux, Switzerland and with the Amalfi Music and Arts Festival held in Vietro sul Mare, Italy.

Her performances featuring the works of African-American composers and other contemporary works have also received critical acclaim.  She is a frequent performer in composer Matthew Burtner’s EcoSono Ensemble and is featured in a DVD recording of the climate change opera, Auksalaq at the Smithsonian in Washington, D.C. (2013), The Ceiling Floats Away with texts by the acclaimed poet, Rita Dove (2018) and Icefield (2022).  Other recordings in which she is featured are The Cross-Cultural Clarinet with Shawn Earle, A Crown of Stars by Andrew Earle Simpson with the Cantate Chamber Singers (Washington, D.C.), Portrait of a Nude Woman as Cleopatra by Leslie Savoy Burrs and the Opera North, Incorporated chamber ensemble.