Every four years, the presidential debates capture the attention of the nation and the world. This week, Longwood applied to the Commission on Presidential Debates to serve as a host institution in 2016. It is a competitive process, and Longwood has made a strong proposal, building on our location – as a crossroads of history and swing region in a bellwether electoral state – and our mission of citizen-leadership and engagement. The university also enjoys strong endorsements from Gov. Terry McAuliffe and regional leaders.  Longwood is the only institution in Virginia to put forward an application for 2016.

The potential benefits of serving as a host institution are unparalleled. For students, it would be a once-in-a-lifetime opportunity to participate first-hand in one of the most important events in our democracy. Rather than just a one-time occasion, a debate would be the capstone of a full year of learning and extracurricular opportunities built around it. Longwood faculty would be able to focus on the debate as a springboard to exciting projects and discussions inside the classroom. Outside the classroom, there would be unforgettable opportunities as well – perhaps, for instance, a series of town-hall debates on issues like citizenship, education and opportunity.

Hosting a debate would also strongly advance the university’s national and international standing. Of the 30 presidential debates held since 1960, 19 have been held at universities. To date, the College of William & Mary (in 1976) and the University of Richmond (in 1992) are the two Virginia institutions to host a debate, and in both cases the debate served as an important catalyst for their national reputations. The precise value of the media exposure is difficult to predict, but one estimate of the value to recent host institutions exceeds $50 million.

A presidential debate is a notable investment and major logistical endeavor, with 3,000 journalists expected to attend, plus full entourages from both campaigns and the non-partisan Commission on Presidential Debates, the official host. If selected, Longwood would work closely with the Commission to finalize plans and logistics. Over this summer, the Commission will carefully review each institutional application, with final decisions expected in the fall of 2015. The debates themselves are scheduled for October, 2016.

Among the 16 competing applicants this year are Hofstra University, Texas A&M, and Washington University in St. Louis.  Longwood compares favorably with regards to the precise venues hosting a debate requires. Hotel space is crucial for the event, and a debate at Longwood would draw on hotel accommodations throughout the region and surrounding cities. If Longwood is chosen, the university's mission of citizen-leadership and Farmville’s historical roots as a place of reconciliation would send an important message in a time of political polarization nationally. 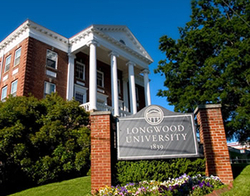