At the Battle of Shrewsbury in 1403, future King Henry V was shot in the face with an arrow that lodged six inches deep into the back of his skull. A surgeon saved his life. Skilled medical care in a period often associated with wanton violence? Indeed, says a medieval scholar who recently published a book on the subject.

Dr. Larissa "Kat" Tracy, associate professor of medieval literature at Longwood University, is the co-editor of Wounds and Wound Repair in Medieval Culture, the latest of several books she has published on torture, brutality and violence in the Middle Ages. As with much of her scholarship on medieval life, the book paints a picture of this period that might surprise some readers.

"Wound repair was fairly sophisticated in the medieval period. Most people assume that it was not sophisticated, but it was," said Tracy. "For example, they used maggots to debride necrotized skin and used honey as an antibacterial to prevent infection. They knew they needed to clean wounds, even if they didn’t know why.

"We know from 12th-century surgical manuals that they knew how to treat skull fractures. There is no way to know if they had anesthesia, but they understood opium and herbs, so I imagine they figured it out," said Tracy, adding that forensic archaeologists have determined from studying disinterred remains that "a lot of wounds healed."

Honey was used to treat the dire wound sustained by Henry V, then a 16-year-old prince, which is detailed in one of the book’s chapters by Michael Livingston. Honey was used both while removing the arrowhead (accomplished with probes "infused with rose honey," wrote royal surgeon John Bradmore), as well as in closing and healing the wound, a painstaking process repeated by Bradmore over 20 days.

While skeletal remains often reveal evidence of wound treatment, they can also indicate the cause of death and postmortem mutilation. The remains of the notorious King Richard III, slain in the 1485 Battle of Bosworth, which ended the War of the Roses and placed the Tudors on the throne, shows that his corpse was stabbed repeatedly. One of the book’s contributors, Robert Woosnam-Savage, was a member of the team of investigators that examined Richard’s remains after they were uncovered in a parking lot in Leicester, England, in 2012. 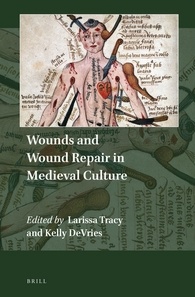 "We know that Richard died from a number of blows to the head with sharp-bladed weapons, which is called sharp force trauma, and he also suffered sharp force trauma after death," said Tracy. "Scholars suggest his corpse was thrown over a horse, and, in a case of postmortem mutilation, soldiers stabbed it and whacked at it."

Richard’s skeleton bears traces of at least 11 wounds, "probably nine at the time of his death and two after his death," wrote Woosnam-Savage, a weapons curator at the Royal Armouries Museum in Leeds, England. "The massive trauma to Richard’s skull indicates that he was probably both helmetless and lying prone, facedown."

In addition to co-editing the book, Tracy contributed one of the chapters. That chapter, related to her interest in the Arthurian legend, analyzes head wounds in the Stanzaic Morte Arthur, an anonymous poem written in Middle English in about 1400, as a political warning about the destabilizing effects of rebellion and weak kingship.

The book features 23 contributors from a variety of fields, including archaeologists, art historians, historians, literary historians, theologians, linguists and medical experts. It was co-edited by Dr. Kelly DeVries, a professor of history at Loyola University Maryland who is an expert on medieval warfare.

"The book was Kelly’s idea, which he’d been thinking about for years, and he invited me to be co-editor," said Tracy, adding that it’s the first installment in a series she edits called Explorations in Medieval Culture from the publisher Brill. "The series will be interdisciplinary and will feature both monographs and collected volumes."

Tracy co-founded and co-directs Longwood’s Undergraduate Medieval Conference, Meeting in the Middle. She received the 2015 Scholarly Achievement Award from the Southeastern Medieval Association in October 2015.

Excerpt from Wounds and Wound Repair in Medieval Culture:

"Many modern misconceptions about the Middles Ages suggest that medieval society was medically stunted, backwards, or primitive, and that treatments bordered on the ludicrous or downright dangerous. But numerous surgical texts circulated throughout medieval Europe and some offered more useful (and successful) treatments than others. Medieval surgery evolved from a complex system of text, practice, belief, transmission, science, and folklore. The first major medical center was twelfth-century Salerno, Sicily, where Christian and Muslim communities lived side by side. Many medieval medical and surgical texts and treatments reflect Muslim influence and, in some cases, origins." 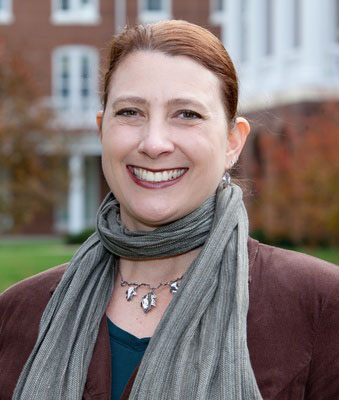