Seamless walking and bicycle connections to a great college-town Main Street. Gardens galore. A new performing arts center on the edge of campus to serve Longwood and the region.

And down the road, maybe even downtown baseball—a Farmville version of Baltimore’s Camden Yards.

As Longwood University’s Master Plan takes its final shape, those are among the big ideas in a document that will serve as a guide star for campus development for the next decade and beyond. After more than a year of research and design work, including at least 87 meetings with constituents on campus and throughout the greater Farmville community, Longwood introduced the plan, titled "Place Matters: The Longwood University Master Plan 2025," at a public presentation and reception Thursday at the Longwood Center for the Visual Arts. An exhibit about the plan will remain open there to the public through January 24th, and a web presentation about the plan is available at http://placematters.longwood.edu.

"This plan is a bold vision for what is already one of America’s truly great college campuses, thriving alongside one of its great college towns," said Longwood President W. Taylor Reveley IV. "It is the product of hard work and careful deliberations over the past year, including a great partnership between Longwood and the Farmville community. This work will ensure Longwood’s sense of place—its classical residential campus situated in a beautiful and vibrant college town—thrives in the decades and even centuries ahead."

"During its master planning process, Longwood reached out to the town and the community for input and ideas," said Farmville Mayor David Whitus ’83. "It is exciting to see so much focus on the interconnectivity between Longwood and downtown. A great exchange of ideas has taken place and that conversation continues."

"For us, it is always about creating a public realm that defines places and communities – where people can live, work, go to school, play and recreate without necessarily being dependent on the automobile," said John Kirk, Cooper Robertson’s lead partner on the project. "It is fundamentally about creating community. It was apparent from the beginning that Longwood’s leadership shared this bold vision for its master plan, so we were thrilled to have the opportunity to work with them to create it."

Longwood’s campus plan envisions several significant new public realm facilities that will benefit both the region and campus.  A new performing arts center, seating approximately 500 people for performances and providing a home for Longwood’s performing arts programs while serving as a cultural beacon for the region, would be located on South Main Street. An expansion to Willett Hall would create a multi-purpose space for university events, concerts and basketball games, while freeing up additional academic space in Willett.

The plan also envisions moving Longwood’s soccer, lacrosse and field hockey fields back from Johnston Drive to South Campus, where they can contribute more directly to the vibrancy of campus, while moving baseball and softball into new facilities downtown that would help galvanize activity and redevelopment. 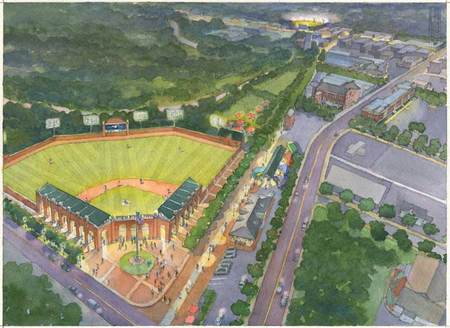 The plan envisions a baseball stadium downtown between Third Street and the Appomattox River, along the High Bridge Trail, and a smaller softball field nearby.

"It’s exciting to imagine spring or summer nights at the ballpark in downtown Farmville, with families from throughout the region watching a Longwood game, or perhaps even a minor league franchise the community might attract," Reveley said. "These are big, exciting dreams for all of us to contemplate together."

The plan is based on the assumption Longwood will grow modestly in the coming years, to about 6,000 students, up from current enrollment of about 5,100. Growth will be achieved largely through improved retention and graduate enrollment rather than expanding the size of the freshman class. Longwood envisions maintaining the proportion of students who live on campus, so there should be some increased demand for both Longwood-managed housing and off-campus private housing, but the university’s essential scale will remain unchanged.

In addition to new facilities, the plan also envisions an array of improvements to other important spaces on campus: visual enhancements to the Curry and Frazer dormitories, appropriately scaled development to invigorate the Venable Triangle that connects campus and downtown, and a handsome and iconic pedestrian entrance to the north end of Brock Commons along High Street. For the south end of Brock Commons, Longwood plans to commission a new statue of its patron Joan of Arc. The new performing arts center would sit alongside a new parking garage, which could serve both campus and downtown Farmville.

There is also substantial attention to landscaping and gardening. SiteWorks, a distinguished landscape design firm based outside Charlottesville, led the plan’s development of a comprehensive landscape and gardening vision, identifying spaces on the central campus and around the Longwood Estate that could be transformed. 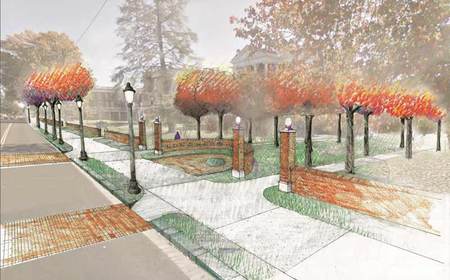 The plan envisions an iconic pedestrian entrance to Brock Commons along High Street.

"The very best college campuses have not just beautiful buildings but compelling outdoor spaces that inspire those on campus, and attract visitors from the local community and beyond," Reveley said. "We’ll be putting a lot of emphasis on these spaces. By dint of its history, geography and inherent beauty, Longwood ought to be widely known and visited for its gardens. This plan will give us a guide to achieve that."

Longwood currently has a number of construction projects from the previous 2008 Master Plan at various stages of the design-completion and construction pipeline, including a new admissions office, student success center, academic building and university center.

The new plan also presents a range of options for the Longwood property east of main campus that currently includes playing fields and the Longwood Golf Course. The plan makes no recommendations as to whether to continue to operate the golf course, but lays out a range of potential long-term alternative uses, including as a botanical garden or arboretum with walking and biking trails. Cooper Robertson has worked closely on leading botanical gardens and arboretums nationwide, including the famed Brooklyn Botanical Garden.

The plan lays out a vision for the campus extending to 2025 and beyond, but there is no precise timetable and the order of potential projects will depend on many factors. No master plan is ever implemented precisely as envisioned on paper, and the new plan is designed for maximum flexibility. 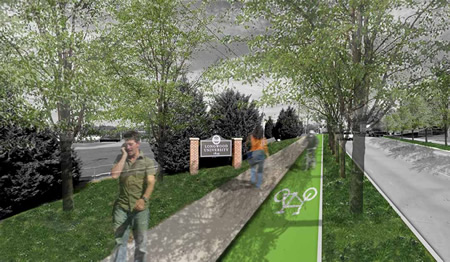 The plan suggests ideas for improving the appearance and walkability of South Main Street.

While many of the ideas envisioned for campus itself will now become central planning priorities for Longwood, others are simply imaginative ideas for future consideration in partnership with the town of Farmville and other entities such as Prince Edward County and the High Bridge Trail. For instance, the plan suggests a number of ideas for improving the appearance and walkability of streets that surround the Longwood campus. These ideas include expanding sidewalks and bike lanes—including connections to the High Bridge Trailand the Moton Museum—as well as landscaping and cutting-edge ideas for improving traffic flow and parking efficiency.

"We had, quite literally, some of the world’s most accomplished architects and planners focused on and excited by our campus, and we were determined not to waste the opportunity," Reveley said. "We asked them to explore whatever ideas that came to them for consideration."

Longwood’s Board of Visitors approved the major concepts for the plan at its September meeting, and the final printed version, inclusive of detailed technical analysis, will be available this spring. The planning process also included substantial research and analysis in areas such as space needs and allocation, energy usage and sustainability, and parking and transportation.

Cooper Robertson’s John Kirk said the distinctiveness of the Longwood plan stems from several sources: its appreciation for what is already great about campus, its determination to build on that strength and its aspiration to contribute to a broader sense of community.

"The vision outlined by the University for the 2025 Master Plan was so bold in ambition, broad in its thinking and clear in intention that it was immediately apparent that only extraordinary planning and design would measure up," Kirk said. "With that bar set exceptionally high, and thanks to the collective efforts of many people, a great and transformative thing has been achieved."