The rain that forced Convocation indoors was interpreted as a positive omen by two of Longwood’s leaders.

Colleen McGrink Margiloff  ’97, rector of the Board of Visitors, predicted better weather for the end of the academic year. "The rule is that if it rains on your Convocation, it is sure to be sunny on your commencement, so you’ll have a glorious graduation," she said.

An ill-timed downpour didn’t dampen the spirits of Longwood seniors who, in a longtime custom, received outrageously decorated mortarboards courtesy of their "little sisters" or "little brothers" at the conclusion of a ceremony marking the formal beginning of the academic year. 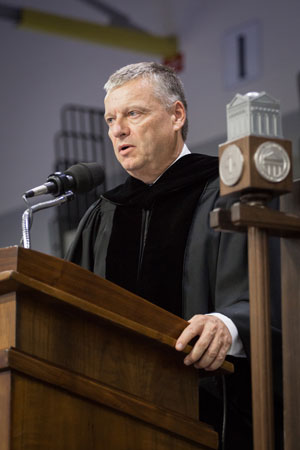 A Farmville native who has served on Town Council since 1998 and was elected mayor in May 2014, Whitus said that "building partnerships looking to the future" is both a "campaign slogan and a life slogan" for him. Three keys to this, he said, are communication, honesty and trust.

Whitus mentioned in his talk a recent conversation with Dr. Jim Jordan, when he and the longtime anthropology professor discussed the Intro to Sociology 101 class Whitus took from Jordan. "President Reveley was probably in either prekindergarten or kindergarten when I was in Dr. Jordan’s class," said Whitus, who is also director of administration, marketing and development at The Woodland, a retirement community in Farmville.

Referring to former president George W. Bush’s comment at a recent college commencement to C students that "you, too, can become president," Whitus added, "To the C students, I hope you become mayor of your town and are a convocation speaker, too."

Whitus, Reveley noted in his introduction, was the first Longwood graduate to be elected to Farmville’s top leadership office, "breaking a long tradition of Hampden-Sydney alums being elected mayor," which drew cheers and applause.

Also on hand were fellow members of Farmville Town Council and Town Manager Gerry Spates who, as Reveley said, was recently honored for his 40 years of service.

Following tradition, senior class president Natalie Joseph was capped on stage by Longwood’s top academic officer. Dr. Joan Neff, provost and vice president for academic affairs, hoisted the mortarboard—equipped with a bubble machine, prompted by Joseph’s bubbly personality—onto Joseph’s head with help from Joseph’s friend and fellow senior Austin Wilson. Wilson turned on the bubble machine, blowing bubbles across the stage and onto members of the Board of Visitors.

In Margiloff’s remarks, she noted that, when she was capped at her own Convocation, her mortarboard included a toilet seat. "My nickname was ‘Queenie Colleenie,’ so that was my royal throne," she said. "Fortunately, there was no social media back then."

Margiloff gave the seniors several pieces of advice, including her admonition that they wear sunscreen on spring break. "Otherwise, your friends will upload the pictures to social media," she said.

Six faculty awards are given at Convocation. This year’s recipients were:

Also at Convocation, Dr. Gordon Ring, professor of music, was announced as Longwood’s first Simpson Distinguished Professor, a new award to honor outstanding contributions to scholarship or the performing arts by a tenured faculty member. The Simpson Professorship was established through a gift given to Longwood this year by Cora Straughan Simpson ’61 and her husband, Murray, to pay tribute to our most outstanding faculty members. The professorship, a one-year appointment, includes a summer research stipend of $5,000, an additional grant of $5,000 to be used in support of future scholarship and a course release for the spring semester prior to the summer in which the recipient elects to receive the summer stipend.