A Place That Has Shaped A Nation

The setting for the 2016 Vice Presidential Debate is a place that has already played a pivotal role in the history of American democracy.

WHEN LONGWOOD AND ITS HOME COMMUNITIES OF FARMVILLE and Prince Edward County welcome the 2016 Vice Presidential Debate on October 4, it won’t be the first time history has been made here. For nearly 300 years, citizens have grappled with, and helped reshape, liberty and democracy in ways that have profoundly affected the nation as a whole.

That history, and Longwood’s work incorporating its historic location into the university’s mission of shaping citizen-leaders, were a major reason the Commission on Presidential Debates chose Longwood to host this year.

It’s a history that predates the United States. Patrick Henry represented Prince Edward in the Virginia legislature. Israel Hill, a remarkable community of African-Americans freed in 1796 after the early death of progressive landowner Richard Randolph, was settled just three miles from Longwood’s campus. Israel Hill’s extraordinary story is chronicled in Melvin Ely’s magisterial Israel on the Appomattox: A Southern Experiment in Black Freedom from the 1790s Through the Civil War, a book that won the 2005 Bancroft Prize for history.

Unless people are free, their spirits are destroyed. And if we love democracy, we can’t give up the fight, not only for our sake, but for the sake of America.

Some of the final hours of the Civil War played out on the north end of Longwood’s campus, just steps from Willett Hall and the site of the 2016 Vice Presidential Debate. On April 7, 1865, Gen. Robert E. Lee held a final staff meeting in a house just a block from campus. His army, shattered in the battle at Sailor’s Creek just east of town, was quickly chased from Farmville as well. Union General Ulysses S. Grant was just hours behind him, and it was from Farmville he sent Lee his first correspondence broaching surrender. Lee demurred, but two days later was trapped 25 miles west at Appomattox Court House, and the major fighting of the war came to an end.

Today, Moton is an award-winning museum, visited by thousands of students and schoolchildren each year. The museum celebrates the Moton strikers’ contributions to civil rights history, while honoring the price they and others paid during the years of Massive Resistance in Virginia after the Brown verdict, including five years when Prince Edward’s public schools were closed.

During that period as well Farmville and Prince Edward were front and center in the campaign to expand true freedom to all Americans. During 1963 downtown protests, local civil rights leader Rev. L. Francis Griffin declared, “Unless people are free, their spirits are destroyed. And if we love democracy, we can’t give up the fight, not only for our sake, but for the sake of America.” Rev. Dr. Martin Luther King visited and preached at First Baptist Church on Main Street in 1962. A Free Schools Association to educate county children attracted national attention, and in 1964 Robert F. Kennedy showed his support with a visit to the Prince Edward Free Schools and a speech at Hampden-Sydney College.

A recurring theme of the Moton story is how students there used the levers and tools of democracy to achieve peaceful change. In their case, the levers were peaceful protest and the court system, where they demanded, with eventual success, respect for their Constitutional rights.

But Moton also celebrates democratic activism and engagement more broadly, so it is proud to stand alongside Longwood in hosting the Vice Presidential debate. In particular, Moton is proud that during the debate the field behind the school where students once gathered to organize their strike will serve as a designated gathering place for those coming to Farmville to make their voices heard in the 2016 campaign. 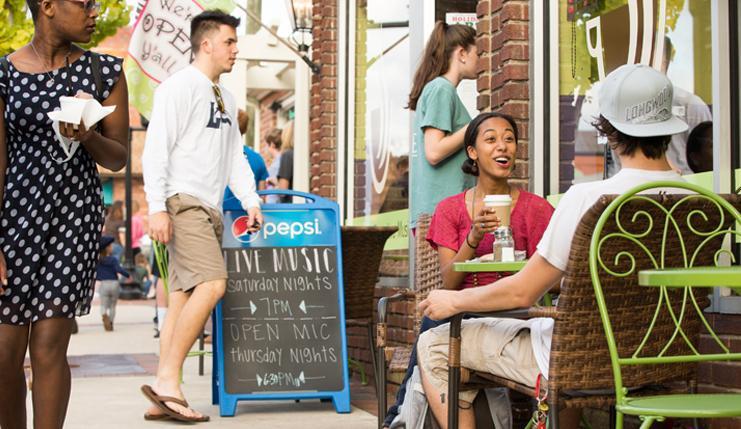 FARMVILLE TODAY IS A LIVELY TWO-COLLEGE TOWN with an official municipal population of about 9,000, though its immediate metro area is several times that size. Downtown Farmville is undergoing a revival, fueled by a Downtown Partnership group of town, civic and business leaders, as well as by ideas that emerged from a new Longwood campus master plan emphasizing walkability and new urbanism. Major construction projects, including a new Longwood bookstore and boutique hotel, are underway downtown, and a new baseball stadium just off Main Street is in the works.

Farmville was founded as a commercial and shipping center for agricultural goods like tobacco and wheat. Higher education runs deep in its DNA; it proudly claims the mantle of America’s first two-college town (New York and Charleston are among several rivals, but Farmville is adamant it has the strongest case).

Today Farmville’s economy is rooted in education, health care and furniture shopping – anchored by the Green Front warehouses downtown that attract visitors from across the region. The High Bridge Trail, which cuts across downtown and runs 31 miles across Southside, has become in just a few years a popular tourist destination for runners and cyclists. Longwood and Hampden-Sydney offer a steady diet of college-town cultural amenities and athletics, with Longwood a member of NCAA Division I’s Big South Conference.

Visitors also come while following the “Lee’s Retreat” driving tour of the final days of the Civil War that includes Sailor’s Creek Battlefield, High Bridge and a string of sites across Southside Virginia. The Moton Museum is also a draw, complemented by a new Civil Rights Walking Tour through Farmville debuting this fall. Farmville’s Main Street is also home to the Longwood Center for the Visual Arts, one of just a few dozen nationally accredited university art museums nationwide, and host to several debate-related exhibits this month.