When Amber Litchford first saw the introductory video played at Moton Museum during tours, she felt transported back to 1951, when Barbara Johns led the student strike that helped transform the country.

"I was in the auditorium they were in and looking at the desks they sat in, and it struck me that they were only a few years younger than I was when they decided to take action," she said of that moment three years ago on a tour with her LSEM—a one-credit course each freshman takes to help them get acclimated to collegiate life—classmates. "It was a big reality check."

Litchford, of Appomattox, is the 2016 recipient of the Moton Legacy Scholarship, which will cover her tuition for her senior year and propel her to graduate school, where she plans to earn a master’s in higher education. She had to wipe away a few tears before she called her mother with the good news this summer.

"This is a big deal for me," she said. "I’ve been back to Moton several times since that first visit because the story really resonated with me as the adopted daughter of an interracial couple. It makes me think about what my life would have been like if I had been born 60 years ago."

The Longwood Board of Visitors created the Moton Legacy Scholarship in 2015 to support an exceptional Longwood student with a demonstrated commitment to the cause of equality of opportunity in education.

Litchford is a liberal studies major and psychology minor who also works as a desk supervisor on campus. In addition to taking on an outsized academic load, she is also an active member of the local community, volunteering her time with several organizations to make a difference in both the Farmville area and her hometown. Part of that commitment is yearly participation in Longwood’s MLK Challenge every spring.

"Last year I volunteered at Piedmont Geriatric Hospital," said Litchford, "and was a bit nervous at first because I didn’t know what to expect. But when I got there, the people were amazing, and we ended up reading poetry to each other and laughing a lot. It feels good to be able to make a difference."

Making a difference is more than a catchphrase for Litchford—it’s the way she lives her life and what she plans to do after graduation. Her plan: become a residential education coordinator, working at a college to help students just like her.

Litchford was nominated for the scholarship by Megan Carney, the Arc quad residence education coordinator, who noted her involvement and passionate advocacy.

"What has always struck me about Amber is that she is passionate about making a positive change in the world and educating others," said Carney. "Longwood is really the place she calls home and where she has found her passion for student affairs. Incredibly, she juggles a lot of different roles on campus, from work with Residence Life to being a leader in her sorority, Zeta Phi Beta Sorority Inc., and serving as a Longwood Ambassador. It’s clear she has grown deep roots here and inspired her classmates along the way." 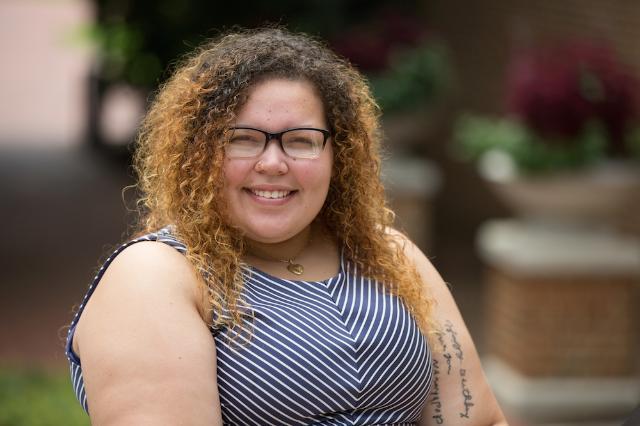