Children as young as 6 know exactly what it’s like to be disrespected, and they have a very grownup response—they get angry.

Researchers at Longwood University delved into this little-studied area, examining the emotional responses of nearly 200 children to what they viewed as a disrespectful act.

"They didn’t care who disrespected them, but they cared what was done and why," said senior psychology major Ally Yarsinske, one of the researchers. "Disrespect made them more angry than sad. If the act was intentional, they felt even more anger."

As part of an internship, Yarsinske and junior psychology major Amanda Chappell analyzed data from a grant-funded University of Kentucky study of 183 children ages 6-12 who were asked to describe a time "when someone disrespected you." The Longwood students’ work was a continuation of ongoing efforts by Dr. Sarai Blincoe, assistant professor of psychology at Longwood, to interpret the data, which is part of a larger study.

"Children tend to see the world through rose-colored glasses, to think that people are good"

One of the study’s major conclusions is that children have "some conceptualization of disrespect," said Blincoe, "and they think about it and respond to it in ways that can be much like adults. At the same time, young boys and girls tend to have very similar emotional responses to disrespect, whereas adult men and women have markedly different emotional reactions."

"With these kids, there were no gender differences in how they reacted, which is very interesting," said Yarsinske, who has been accepted into graduate school at Lenoir-Rhyne University and, like Chappell, plans to pursue a career in counseling. "The gender of the target—the child—didn’t matter, and the gender of the actor also didn’t matter."

The most common type of disrespect with children, as with adults, was verbal disrespect, though children experienced more physical disrespect than adults. Most of the acts were at the hands of a peer (60 percent) or sibling (28 percent). Adults perpetrated just under 10 percent of the reported acts.

"In general, these were one-time events, like with the child who said that at the playground her shoes were taken and thrown over a fence," said Chappell. "In some cases, things were taken. Some of the bullying, though, was kind of startling."

The children were reluctant to label the person who disrespected them as mean, which is one of the questions they were asked. "Children tend to see the world through rose-colored glasses, to think that people are good," said Blincoe. "To them, a disrespectful act doesn’t necessarily indicate that the person is a mean person. Often they still like the person, probably because the person is a brother, sister or friend."

Blincoe, who earned her doctorate at the University of Kentucky, was the graduate student coordinator of the grant project through which the data was collected. 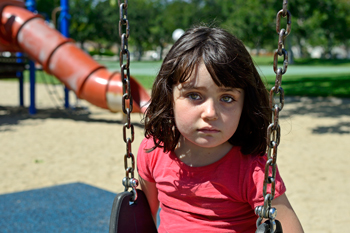