Even though they’ll probably never play on it, some Longwood University students are excited about a playground the local Head Start program will build this summer.

They helped design the playground, which was their community project for a psychology class this spring. The final design will incorporate a number of the features they proposed, said Sharon Harrup, president and CEO of STEPS, a Farmville-based community action agency that operates the Head Start program in several counties.

"The students’ ideas were innovative, especially the music play station. They did a really good job," said Harrup. "They were thorough—they even went to Lowe’s to see how much fencing and how many gates would be needed."

"I had always thought that playgrounds just magically popped up"

Five students in the Community Psychology class were asked by their professor, Dr. Danette Gibbs, to research options (they were given a $25,000 budget) and design a playground suitable for Head Start’s new site on Griffin Boulevard, adjacent to campus. The playground for 3- and 4-year-olds is expected to open in late August.

"The students had to balance a number of variables, including age appropriateness of equipment, safety, accessibility for children with disabilities, fit of equipment in that space and identifying engaging equipment that is also socially, emotionally, physically and cognitively stimulating for the children," said Gibbs, assistant professor of psychology.

The playground architects say the work was challenging but rewarding.

"I had always thought that playgrounds just magically popped up," said Emory Read ’17, a psychology major from Midlothian. "We had to consider what equipment would be needed or not needed, what would help the kids learn and grow and stimulate their motor development. The playground is for more than just fun."

Ian Storey ’17, a psychology major from Warrenton, said that he and his fellow students were "not exactly architects, and we had to learn about things that weren’t part of our skill set, including safety standards such as ramps, as well as surfacing and fencing, which was required."

"It was really tricky but also a lot of fun. I enjoyed doing something for the community, especially for kids," said T.J. Baumgart ’18, a psychology major from Salem. 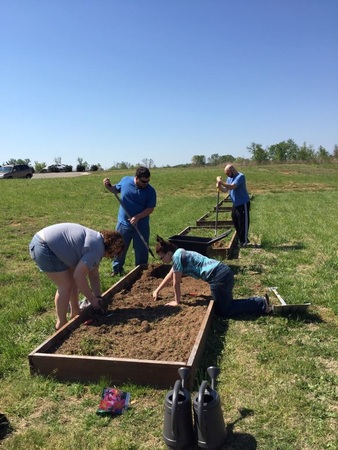 The playground project was one of five undertaken by students in the class this spring. Student teams also designed a logo for the Piedmont Community Health Coalition, helped a Crossroads Prevention Services’ parenting class with its evaluation methods, developed a community gardening program for the YMCA and put themselves in the shoes of people served by Farmville’s food pantry (FACES) by eating from the food bags the agency provides patrons for two weeks.

"One member of the FACES team took it very strictly," said Gibbs. "For a week, he ate nothing other than what was in his bag, which is intended as a diet supplement. He said that was the hardest week of his life; he lost 10 pounds and couldn’t concentrate.

"I wanted students to learn about poverty, about not taking food for granted and about grass-roots efforts—that it takes people working together, rather than experts, to solve problems, which is what the field of community psychology is all about."

Community Psychology is a 300-level service-learning course that Gibbs developed and teaches every third semester. Each student is expected to provide 15-20 hours of service to a local agency in a project that usually involves developing or evaluating programs that promote health.

Other community agencies that have benefited from the students’ efforts in previous semesters are the domestic violence safe house Madeline’s House and Prince Edward County High School.

"We’ve had some awesome projects in this course, which encourages students to see themselves not as volunteers but as collaborators in creating social change," said Gibbs.