It was a warm late summer Monday evening with thunderstorms rolling in. Sgt. Walter Whitt and Officer Billy Shular were checking on several alarms in the Longwood Landings apartments off Main Street, a few days before most students were scheduled to return.

Suddenly, they noticed the faint smell of smoke and the two officers were off and running on an evening they won’t soon forget.

Later this semester, they’ll be presented the Medal of Valor by the Longwood police department for their actions last week.

The alarms were tripped after a lightning strike hit and ignited an HVAC unit on the top of the building that’s home to the Longwood bookstore, and above it, three floors of Longwood student apartments.

Flames were soon spreading along the roof. Whitt and Shular headed straight into the building, and up the stairs toward the smoke, pounding on doors to make sure every last student was out safely.

Fortunately, with classes still a week away, only about three dozen students had moved in, and they were all safely evacuated. Area firefighters converged almost immediately and poured water on the blaze, confining it to an attic area and top floor, though there was water damage throughout the building.

Within minutes, the Longwood community was rallying, with residence life staff immediately working to find temporary housing for displaced students. President Reveley came to the scene to offer support, and Longwood faculty and staff who heard the sirens and news came as well, to reassure students and even offer guest beds and couches.

"Longwood did, really, what Longwood always does," said Dr. Tim Pierson, vice president for student affairs, "and that’s pull together in a crunch. It was so gratifying to see the outpouring of support from faculty, staff and other students who showed up the night of the fire offering to help, even going so far as offering to house the affected students that night."

Longwood did, really, what Longwood always does, and that’s pull together in a crunch.

Nine days later, Longwood is still assessing the damage and working to accommodate students until repairs are completed. Some quick-thinking tarp action helped protect many of the textbooks waiting for pick-up in the bookstore below, and the bookstore itself re-opened on Thursday, in time to serve returning students for the semester. The Longwood Café there is also open again.

Cleanup and repairs were underway almost immediately. The 102 students who have been temporarily displaced have all been accommodated in temporary Longwood housing. University officials hope residents on the second and third floors of the damaged buildings will be able to return within a matter of weeks, but are still receiving final damage assessments. The fourth floor will likely be out of commission for longer. Longwood staff are working closely with all affected students to keep them up to date on progress and developments.

At the President’s Welcome for faculty and staff in Jarman Auditorium, two days after the fire, President Reveley told the community the fire was a serious one and praised the officers and the overall response for revealing Longwood at its best. A Farmville Herald editorial the next day expressed gratitude and thanks to the officers, Longwood staff and the eight local fire companies that responded.

"We are sure students’ parents are more than thankful to know their children are safe in Farmville because of the joint effort of Longwood and the area fire departments," the Herald wrote.

Meanwhile, Sgt. Whitt and Officer Shular are being hailed as heroes, their quick actions having saved students from injury in the fire.

"Officer Shular and Sgt. Whitt put the students’ safety ahead of their own, running upstairs toward the fire to evacuate the building before fire crews arrived," said Longwood Police Chief Col. Bob Beach. "Their actions took an incredible amount of courage and it’s fitting we award that bravery with the Medal of Valor."

The Medal of Valor is given to Longwood Police Department members who perform "an act of gallantry and valor above and beyond the call of duty, at imminent personal hazard to life and with knowledge of the risk." The medal ceremony will take place this semester. 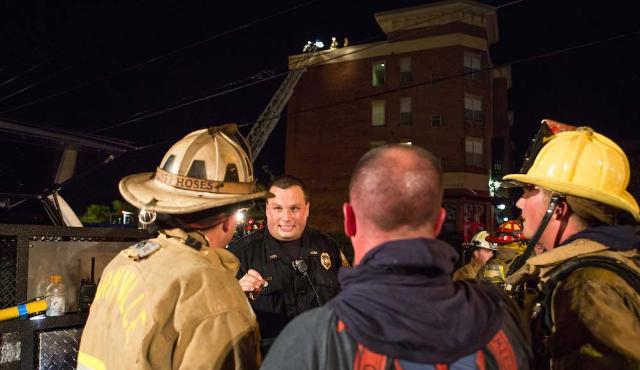