Variation in the amount of organic matter in lake sediments—a critical factor in understanding and tracking the carbon cycle—is significantly linked to algae production in arctic lakes, according to a new study by Longwood biology professor Dr. Ken Fortino.

"Understanding organic matter cycling is important to the ongoing climate change conversation," said Fortino, who has studied pristine arctic lakes in Alaska and is continuing his research on farm ponds in the southeastern United States. "When organic matter, usually dead leaves or algae, enters ponds and lakes, the carbon within is either cycled back into the atmosphere or buried at the bottom of the pond and taken out of the cycle. This study shows that variation in algae growth in the lake is related to the variation in the amount of carbon found in the lake mud." 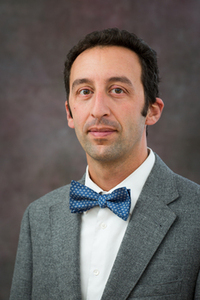 Fortino’s study, titled "Patterns in the Percent Sediment Organic Matter of Arctic Lakes," was published in the April edition of the academic journal Hydrobiologia.

Small streams and lakes were once an overlooked piece of the carbon cycle, but research in recent years has revealed the large role some of those lakes and ponds play in taking excess carbon out of the atmosphere. Fortino and his colleagues measured organic matter levels in several lakes, finding significant variations even when the bodies of water were near each other.

"The levels of organic matter stored in lake mud tended to be quite uniform in different parts of the same lake, which let us know that whatever is controlling those levels varies at a scale larger than the lake level," said Fortino. "As we keep peeling back layers of this puzzle, our understanding of the carbon cycle becomes more nuanced, and scientists can make better predictions as our planet changes."

Fortino has continued his line of research with Longwood undergraduate students, focusing his attention on the hundreds of thousands of smaller farm ponds that dot the southeastern United States—the overwhelming majority of which are man-made. For several years, students have spent time wading up to their chests in area ponds, setting and collecting organic matter samples and gathering data to further reveal the subtleties of the carbon cycle.

"The landscape is much different in the southeastern U.S. than it is in Alaska," said Fortino. "Here, there are very few natural ponds and lakes—Virginia has only two natural large bodies of water—and it’s a very underresearched area. The introduction of all of these small man-made ponds has really transformed the hydrology of the region, and understanding what impact it has is fundamental to local climate challenges."

Recently, two Longwood biology students, Jen Andrews ’16 and Julia Marcellus ’16, traveled with Fortino to the annual meeting of the Association of Southeastern Biologists in Concord, N.C., to present their research on carbon cycling in farm ponds. Marcellus will also help present their research at the annual meeting of the Society for Freshwater Science in Sacramento, Calif., in May.