Longwood Theatre presents The Musical of Musicals (The Musical!), April 14-23

Longwood University Theatre’s production of The Musical of Musicals (The Musical!) will be presented April 14-17 and 21-24 in the Mainstage Auditorium of the Center for Communication Studies and Theatre.

Performances will be at 7 p.m. Thursdays-Saturdays and at 3 p.m. Sundays. Tickets are $10 for general admission; $8 for senior citizens, Longwood faculty/staff and students from other colleges/schools; and $6 for Longwood students with ID.

The Musical of Musicals (The Musical!), by Eric Rockwell and Joanne Bogart, is a musical comedy that parodies musicals.

"If you like musicals, you’ll love it. If you think musicals are stupid, you’ll love it even more," said guest director Keri Wormald. "The lyrics are clever, and we’ve done our best to remain true to the spirit of the shows of Rodgers and Hammerstein, Stephen Sondheim, Jerry Herman, Andrew Lloyd Webber and Kander & Ebb while creating a party atmosphere in the theater." 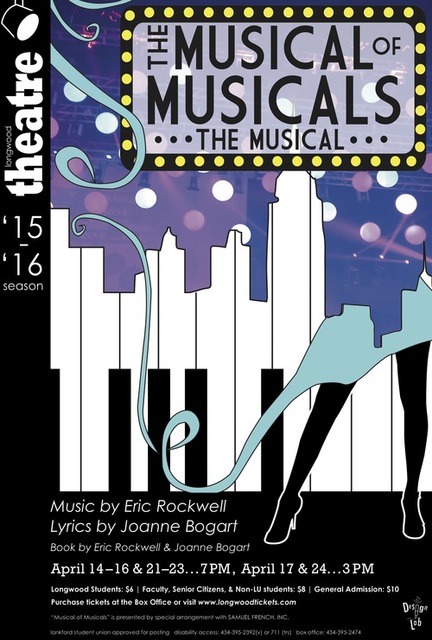