Evidence indicating that several multiyear droughts may have been the major factor in the puzzling collapse of the ancient Maya civilization is one of many topics explored in a new book by Dr. Walter Witschey, research professor of anthropology and geography at Longwood University.

Witschey, an expert on ancient Maya culture, is the editor of the Encyclopedia of the Ancient Maya, a reference book targeted mainly for college and high school libraries, and those interested in the Maya culture. He wrote about one-third of the book, which features more than 200 entries by about 80 researchers, and edited the balance.

"Many of the articles summarize new material about recently discovered sites," said Witschey. "Other articles, such as one on LiDAR, help explain how we learn what we know about the ancient Maya. LiDAR is an aerial remote-sensing technology that enables Maya researchers to produce incredibly detailed terrain maps of ancient sites, even in areas of dense jungle."

The 574-page hardback and ebook versions, published in late December by Rowman & Littlefield, features other information about the ancient Maya culture from around 1000 B.C. to the Spanish Conquest after A.D. 1600, including: 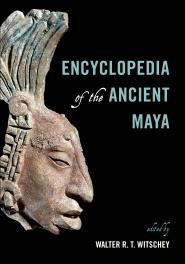 This is Witschey’s second book on the ancient Maya, who lived in eastern Mexico, all of Belize and Guatemala, and small parts of western Honduras and El Salvador. Witschey is the coauthor, with Dr. Clifford Brown of Florida Atlantic University, of the Historical Dictionary of Mesoamerica, published in 2012. (The ancient Maya lived within Mesoamerica, which encompasses a larger area, extending from the southern U.S. border to Nicaragua.) Brown is among the contributors to the new book.

Since about 1996, Witschey and Brown have worked together on an electronic atlas that contains more than 6,000 ancient Maya archaeological sites. The atlas, portions of which are publicly available, will serve as the primary data source for the next book by the pair.

Witschey has made dozens of visits to ancient Maya sites since 1978, including living in the Maya area several months each year from 1986-1992. In early December 2015, he led a 12-day trip to several Inca and pre-Inca sites in Peru. Among them were the Chanchan royal palaces, the tomb of the Lord of Sipan and Machu Picchu, one of several UNESCO World Heritage sites the group visited, which is one of the most important archaeological sites in the world.

The ancient Maya have fascinated Witschey since, at age 10, he read God, Graves, and Scholars, a popular history of archaeology by German writer C.W. Ceram. "I was fascinated by the lost cities in the jungle, by the sophisticated calendar that has been operating continuously for two and a half millennia and by the script, which had not been deciphered when I entered the field," he said.

Excerpt from Encyclopedia of the Ancient Maya:

[Researchers in the latter half of the 20th century] revealed with increasing clarity truths about Mesoamerica, and the Maya region in particular. Many revelations also brought new research questions and new scholarly debate about the nature of the ancient Maya. Across the variety of local landscapes, they had developed sophisticated solutions to universal human problems: sustainable subsistence techniques, faith in deities to explain the unexplainable, elaborate social and political systems and economies. In short, the revelation is about human civilization, our coming together to solve collective problems of survival. It is an intriguing story of admirable and innovative successes, but perhaps it is also a cautionary tale for the twenty-first century about resource overutilization and failure to follow sustainable practices.