News networks looking for a “GameDay” atmosphere for debate week

Imagine ESPN’s “College GameDay” coming to Longwood. Now imagine something much bigger, with five networks, dozens of anchors, and two days’ worth of coverage. Get ready to put yourself in the middle of it all – and maybe be seen on live TV.

When the major news networks descend on campus to cover the Vice Presidential debate, they’ll be looking for energetic crowds of students to stand behind their sets – just like sports fans are used to seeing on ESPN’s “College GameDay.”

“All the networks want that enthusiasm behind their stages on debate day,” said Matthew McWilliams, Director of Communications & Media Relations. “They could easily broadcast debate preview shows from their studios in New York, but they want the energy of college students to set the scene, and we’re going to show them what Lancer spirit looks like!”

Text LUonTV to 95577 to sign up for text alerts and be notified about when and where live broadcasts are happening on campus.

Five major news networks – including CNN, Fox News, and MSNBC – will be constructing sets on campus. Live broadcasts, featuring many of the most recognizable faces in journalism today, will begin the evening of Monday, Oct. 3, and continue into the late-night hours after the debate on Tuesday, Oct. 4.

Students can sign up for text alerts to be notified about when and where live broadcasts are happening. Just text ‘LUonTV’ to 95577 to sign up for alerts (standard text messaging rates apply).

Throughout the broadcasts, news outlets want Longwood students to come out to watch the coverage and lend excitement to the setting.

“One of the first things network producers noticed when they visited campus was the energy of our student body,” said Matt McWilliams. “We want to show them that energy when coverage starts the night before the debate.”

For students, it’s a chance to be seen on TV and witness the excitement of this historic event. It’s also an opportunity to show Longwood pride to a nationwide TV audience.

Here are the broadcast times and locations (subject to change): 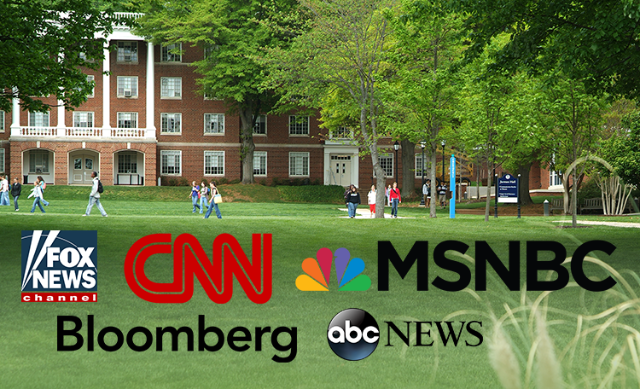