Student using piece of equipment she made in research project

Why buy it online when you can make it yourself?

That’s the way a resourceful researcher thinks, and Longwood University biology major Jessica Hoak ’17 showed her head was in the right place this summer when she made her own "toughness meter" for studying leaf litter decomposition.

Her homemade "toughness meter," which allows her to determine how resistant a leaf is to puncture, is one of the tools she’s using in her project. Here’s how it works: She places a section punched from a leaf, called a leaf "disc," on a small block of wood, where it’s held in place under a plexiglass plate with a hole. Then, using a plastic tube with a drill bit spiked through one end, to which water has been added, she pokes the leaf like a nurse giving a shot. 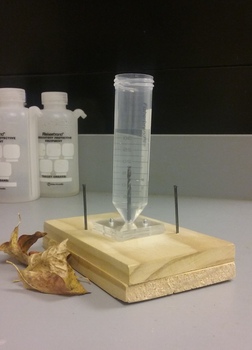 "You measure the amount of water it takes to penetrate the leaf, which tells you how resistant a leaf is to puncture," said Hoak, of DeWitt, who has used her device on 60 leaf discs. "I had to make three tubes. The first two were too small and didn’t hold enough water. I think it’s cool that we built our own toughness meter, instead of just buying one on the Internet."

She has had to improvise in other ways as well, but she realizes that’s part of the research process.

Going out into the field is one aspect of her project that Hoak has enjoyed. "I’ve learned that research doesn’t always mean being in the lab. Much of my work has been done outdoors," she said.

Ultimately her work on leaf litter, part of Longwood’s PRISM program, will aid understanding of how native and invasive crayfish affect the processing of organic matter. In addition to her toughness meter, she is measuring the rate at which leaf matter decomposes—a barometer of how food is moving through the aquatic ecosystem—in a process that removes all of the organic matter.

Leaf packs—three small leaves held together with a binder clip—are weighed, pre-leached and put into large water tanks with crayfish for 3, 10 or 24 days. After being removed from the tanks, the leaf matter is weighed again, dried and ground up. What’s left is put into small ceramic cups, burned in a furnace at 550 degrees Celsius [1,022 degrees Fahrenheit] and weighed a third time. Weighed again?

"The scale is my best friend. I spend a lot of time with the scale," Hoak said with a laugh. "Yes, I do a lot of weighing. I’ve definitely learned how to do weighing."

Weighing is important because the primary focus is how much leaf litter mass, especially organic matter, has been lost in the tanks, said the faculty mentor for the project, Dr. Ken Fortino, assistant professor of biology.

Hoak is no stranger to research. The last three summers, she conducted tobacco-related research as an "ag technician" at the Southern Piedmont Agricultural Research and Extension Center in Blackstone. "We look at GMOs, cross-pollinating plants, tobacco mosaic virus—everything from bugs to breeding," said Hoak, who resumed that work July 25 when she finished with PRISM.

"PRISM is a great opportunity," she said. "Dr. Fortino has taught me how to set up experiments and how to do them. I have liked both being in the field and being in the lab."