After a presidential primary season that he described as "fantastical," Washington Post chief correspondent Daniel Balz, who was awarded an honorary doctorate, told Longwood University graduates on May 14 that the upcoming presidential debates will be a welcome breath of civility.

"Instead of being exercises in insults and personal accusations, as we have seen in recent months, general election debates are spirited but civil in tone, with the express purpose of providing voters with a better understanding of the candidates," said Balz.

In hosting the lone U.S. Vice Presidential Debate of the election, on Oct. 4, Longwood is "providing a public service," Balz added.

Longwood awarded 940 bachelor’s degrees in the May 14 undergraduate ceremony and 184 master’s degrees the previous evening. (These numbers include graduates who completed their studies in August and December 2014.)

Balz, who was awarded an honorary Doctor of Humane Letters degree, said that debates are more vital than ever due to the increasing polarization of politics. 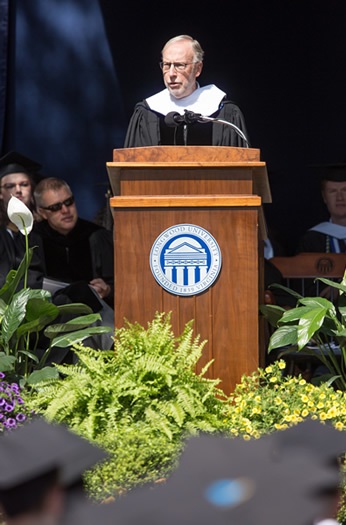 "We seem to have lost the ability to debate the issues, yet vigorous debate is essential to a democratic society. The definition of journalism has broadened in this Internet age, and we are inventing new forms of storytelling to adapt to the demands of our readers. But I believe that tough-minded, independent reporting and analysis, written without fear or favor, as the saying goes, remains essential to a democratic society and is needed as much today if not more than ever."

Balz called the 2016 presidential election the most unusual in "many, many years."

"A major U.S. political party will for the first time nominate a woman for president, a 74-year-old self-described democratic socialist has become the darling of your generation and a wealthy real estate developer—a reality TV star with no political experience—is now the presumptive nominee of the Republican party. Ladies and gentlemen, you really can’t make this stuff up. If anyone had tried to sell a novel based on the plot of this campaign, a publisher would have dismissed it as too fantastical to believe."

In the undergraduate ceremony, Taylor Ann Liptak, a music major from Mechanicsville, and Monica Bentley Vroomen, a modern languages major from Alexandria, received the Sally Barksdale Hargrett Prize for Academic Excellence, which is awarded to the graduating senior with the highest grade-point average. Each graduated with a 3.98 grade-point average and is a member of Phi Kappa Phi national honor society. Vroomen is a member of the Cormier Honors College for Citizen Scholars.

Also in the undergraduate commencement, Natalie Ann Joseph, a communication studies major from Yorktown, received the Dan Daniel Senior Award for Scholarship and Citizenship. She is senior class president, a member of Phi Kappa Phi and the host of a popular show on campus radio station WMLU.

"We’re given one life to live, so we need to make the most of the life we’re blessed to have," Suzy Szasz Palmer, dean of Longwood’s Greenwood Library, told graduates at the graduate commencement. "Have a passion for life. Learn how to have fun. Whatever you do, be it work or play, give 100 percent. Your whole life will be richer for it. And so will the world."

The work the graduates will do is important but isn’t "the only component of a meaningful life," said Palmer, former president of the Virginia Library Association, who is retiring June 30 from Longwood.

"Continue to read and learn. Seek out mentors, in your workplace or through professional networks, and eventually mentor others in return. Cultivate hobbies or activities outside your work. Make friends—real ones, not just on Facebook. Find someone to love, but don’t rush to be in love. Take care of yourself, so you can take care of others. Perhaps most important, regardless of the work you are about to do, seek to be of service—or, as the novelist John Irving wrote in The Cider House Rules, ‘to be of use.’"