The voting age may be 18, but there’s no age restriction on getting involved in the political process. That’s what students from across Southern Virginia learned when they gathered at Longwood for a conference on citizenship and politics last week.

In a setting resonant with history, and where more history is set to be made on Tuesday, they learned how young people can use the levers of democracy and citizenship to change the world – from community involvement to voter registration to leadership in the classroom.

The conference was sponsored by Longwood, and organized by its College of Education and Human Services, as part of public outreach programming associated with the Vice Presidential Debate, in partnership with Scholastic Inc.

“It makes my heart joyous to see you all here today thinking about citizenship,” Longwood President W. Taylor Reveley IV told the participants in his opening remarks. “It’s what you learn in your school days that helps you make decisions and that makes democracy tick.”

“Never assume that being a student makes you unable to change society for the better. Just ask Barbara Johns. She was only 16 years old, and she helped change the direction of this country for the better.”

Keynote speakers at the conference included Virginia Secretary of Education Dietra Trent, and Edward Ayers, president emeritus of the University of Richmond. Other speakers included Longwood professors and students, Scholastic’s editor-at-large, and other visitors from higher education and the public sector.

“Never assume that being a student makes you unable to change society for the better,” Dr. Trent, Virginia’s Secretary of Education, told participants. “Just ask Barbara Johns. She was only 16 years old, and she helped change the direction of this country for the better.”

Johns was a high school student in 1951 when she first protested the substandard conditions at the all-black Moton High School, now a National Historic Landmark and civil rights museum affiliated with Longwood. Johns and her fellow students became plaintiffs in the groundbreaking Brown vs. Board of Education case, in which the Supreme Court ruled segregation to be unconstitutional, and some of Friday’s programming took place at the museum. 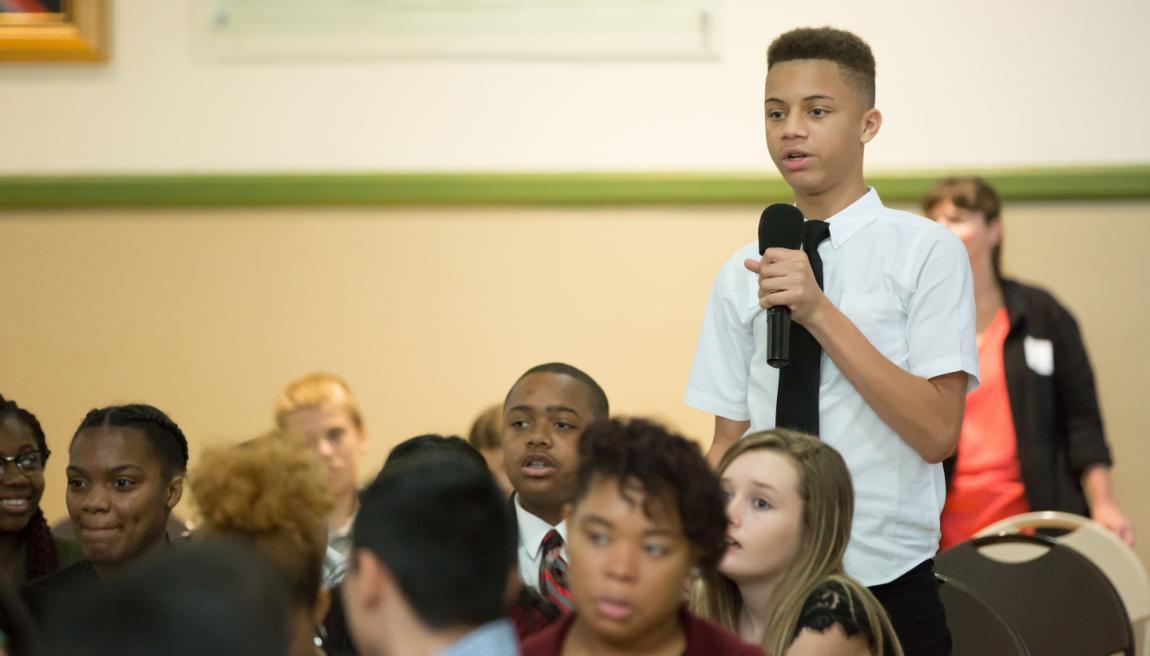 “As citizens of the Commonwealth and nation, it is not acceptable to sit on the sidelines. The world is clamoring for your involvement.”

The students also visited C-SPAN’s Campaign 2016 bus, which was on campus in advance of Tuesday’s debate. And some of the students from nearby Prince Edward and Cumberland Counties were able to get a last-minute tour of the Media Filing Center, which will be a hub of activity during and after the debate Tuesday night.

“As citizens of the Commonwealth and nation, it is not acceptable to sit on the sidelines.” Secretary Trent told them. “The world is clamoring for your involvement.”