In a ceremony on Friday, Longwood University unveiled a new monument that celebrates the consequential history of Farmville and its surrounding communities, and those who fought to expand American liberty, helping shape not only Farmville’s powerful story but that of the nation.

That group is a remarkable one, spread over the centuries and each fighting for freedom in distinctive ways: founding father Patrick Henry, the freed-slave community of Israel Hill, and courageous Civil Rights pioneer Barbara Johns, along with the generation of students who sacrificed years of public education in their legal fight to defeat school segregation.

We commemorate and celebrate this crossroads of American history. It is a glory to see this monument today. 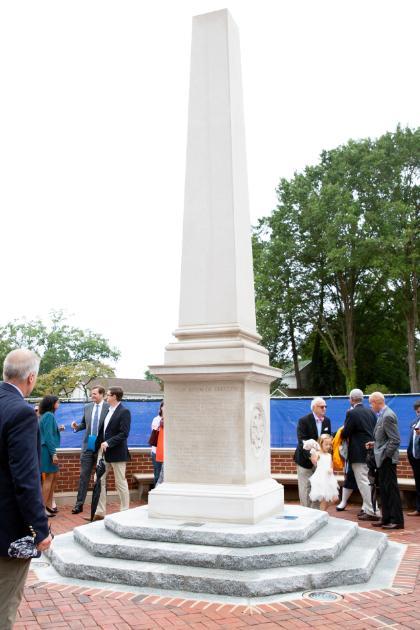 The monument, a 16-foot tall obelisk on a stone base surrounded by a low brick wall, stands just across High Street from Longwood’s signature Rotunda, and in front of a new admissions building that will open in fall 2019. Inside that building there will be historical exhibits tied to the monument.

“We commemorate and celebrate this crossroads of American history,” said Reveley. “It is a glory to see this monument today.”

The idea for a monument to honor Farmville’s history and those who sacrificed in the cause of liberty was announced during convocation ceremonies in 2017—the traditional start of the academic year. During that ceremony, Reveley announced that Longwood would explore building a monument to “those across the centuries in our community who labored and sacrificed to expand liberty” in conjunction with the new admissions building on High Street. One year and one day later, the Farmville Freedom Monument was unveiled.

Monuments send a powerful message, often less about their subjects than about the time and place they are built. In our choices of whom to honor and how, we make a statement of values that will carry into the far future.

The site on which the monument stands also shares a close connection to Longwood’s past. Professor Gordon Moss, whose courage and bravery during the public school closings in Prince Edward County from 1959-1964 inspired many Longwood students and community members, lived in a house that once stood on the property.

In a message to campus inviting students, faculty and staff to attend the unveiling along with the broader community, Reveley noted, “Monuments send a powerful message, often less about their subjects than about the time and place they are built. In our choices of whom to honor and how, we make a statement of values that will carry into the far future.”

The forefront inscription on the monument reads:

A NEW BIRTH OF FREEDOM

This is America’s first two-college community, with the founding of Prince Edward County in 1754, Hampden-Sydney in 1775, Farmville in 1798, and Longwood in 1839. It is a crossroads of American history, home to Patrick Henry and Barbara Johns, to the people of Israel Hill, the Moton strikers, and the generation locked from public education. This is where the Civil War moved to culmination, and where the Civil Rights Movement took stride for the nation.

This monument honors all in our community throughout these centuries who have labored and sacrificed to bring forth, in Lincoln’s words, “a new birth of freedom.” It marks also our commitment to honor their struggles by serving as a beacon of education and of leadership forged in reconciliation, and marks our resolve to pass a still finer ideal of liberty to generations to come. 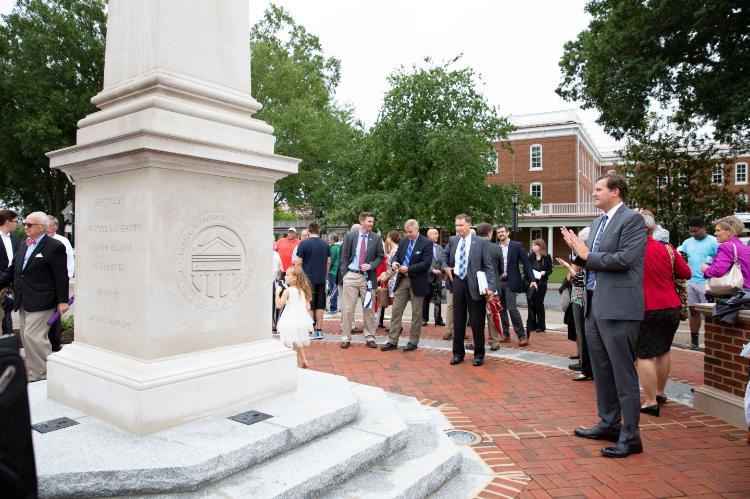 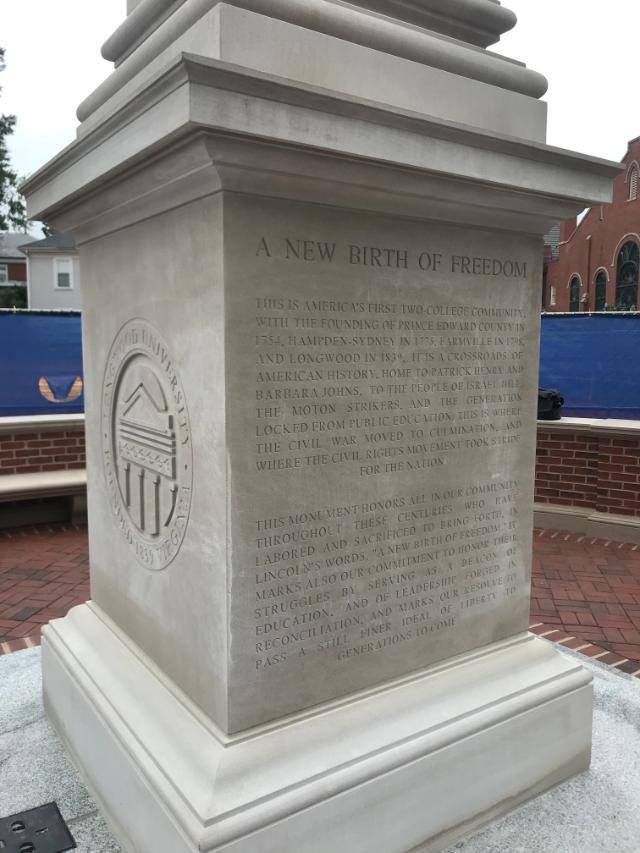 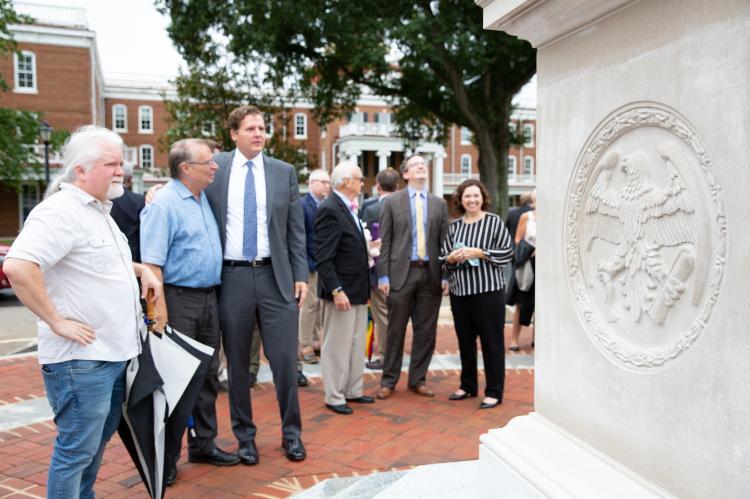 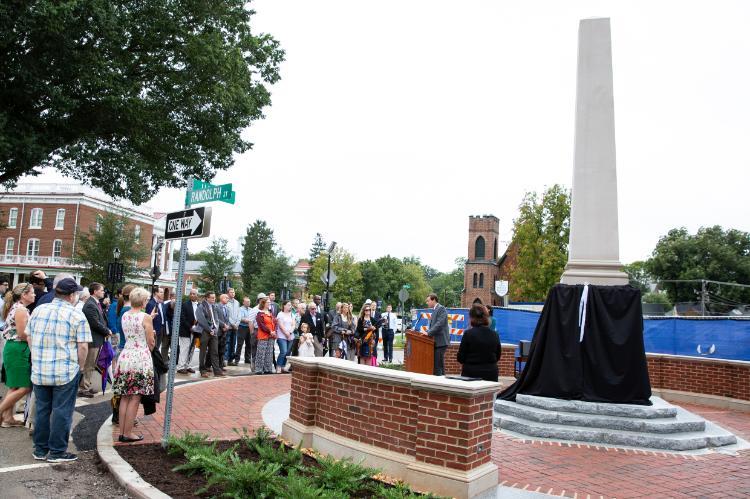 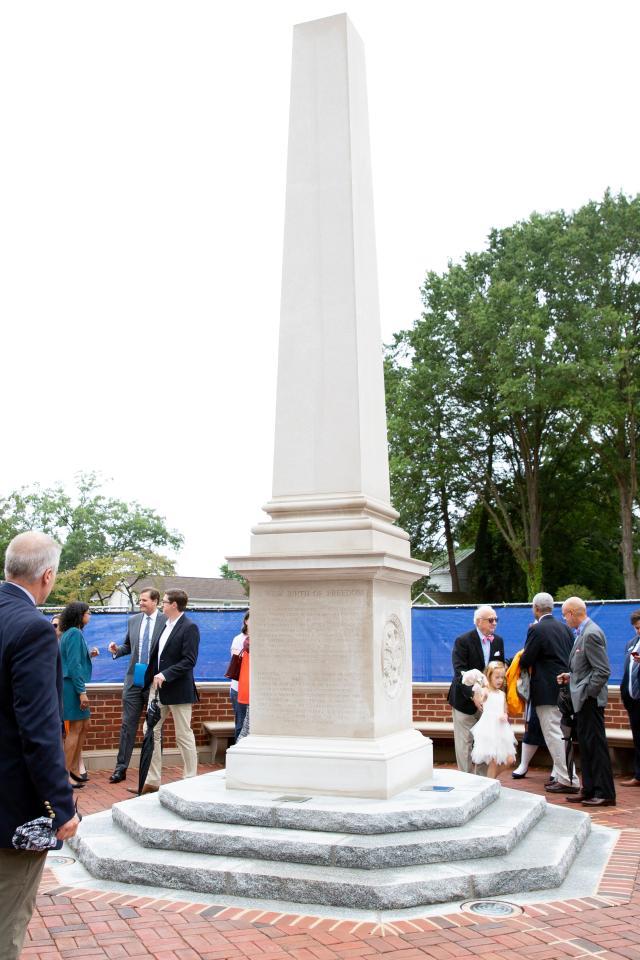