Brigadier Gen. Patrick Finnegan, Longwood University’s 25th president who captured the hearts of students who affectionately called him “P-Finn” and helped usher in a new era for Longwood athletics, has passed away. A family member confirmed his death, following an apparent heart attack Monday night. Finnegan was 68.

Finnegan’s rapport with Longwood students ran deep. With his ever-present smile and participation in campus traditions like Color Wars—where he wasn’t afraid to stand in the middle of a scrum of hundreds of students and emerge doused in green and red paint—he became a beloved figure at the university despite his brief tenure as president.

“President Finnegan was a true citizen leader for our country, and an inspiration to the students who were here during his presidency,” said Longwood President W. Taylor Reveley IV. “The entire Longwood community extends our condolences and thanks for his service.”

Arriving at Longwood in 2010 following a distinguished Army career including service as Dean of the Academic Board at the U.S. Military Academy at West Point, Finnegan championed efforts to help Longwood reach greater heights in all phases, from setting in motion an academic master plan to championing efforts to expand international educational opportunities for students. He also led the university’s transition from Division 1 independent status into the Big South Conference.

An ebullient supporter of Longwood athletics, Finnegan was a staple at Lancer games and matches, often painting his face blue and cheering wildly alongside the Lancer Lunatics at basketball games. 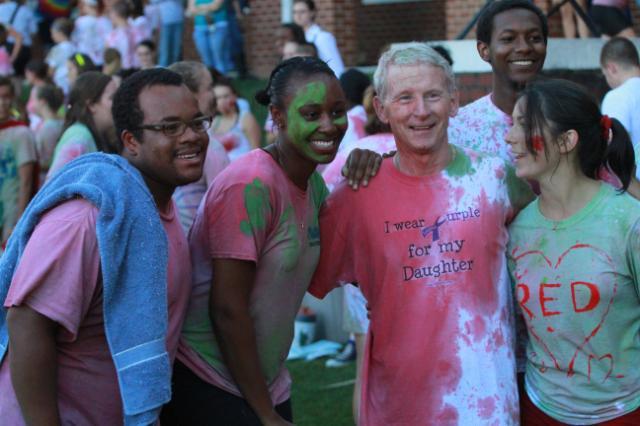 It was during Finnegan’s tenure that the athletics program, fresh to the Division I level, became a member of the Big South, a distinction Finnegan championed from his first days on campus. “We look forward to showing that our Lancers can be competitive both on the field of play and in the classroom, while increasing the visibility for our outstanding university,” he said in the announcement.

His beloved Lancers delivered on that promise in short order, as the softball team won the university’s first Big South championship in the 2013 season.

“Longwood students absolutely adored President Finnegan. That was obvious from the start of his presidency,” said Provost Emeritus Ken Perkins, who served as provost during Finnegan’s time in office. “He was extraordinarily kind and saw the value in everyone working together. But it was the honor code that brought him here. He made a secret trip to campus after submitting his application and told the story of walking into the library and seeing the honor code so prominently placed and having the deep sense that Longwood was the place for him.”

Finnegan resigned from Longwood in May 2012 due to health reasons, and retired to his home in Virginia Beach. He later lived in Midlothian.

The son of an Army colonel, Finnegan graduated from the United States Military Academy at West Point in 1971, and returned in 1998 after a career in the Judge Advocate General Corps to serve as professor and head of the department of law before being appointed the 12th Dean of the Academic Board in 2005. He served in that position until he came to Longwood in 2010. His sister Rosaleen graduated from Longwood in 1976.

At Finnegan’s 2011 inauguration, U.S. Sen. Jack Reed of Rhode Island, a classmate of Finnegan’s at West Point and longtime friend, congratulated his fellow officer, noting Finnegan’s lifetime dedication to “selfless service to our Army, our country, and now Longwood University.”

“Patrick Finnegan understands, through his experience, that talent, technology and technique can never ultimately succeed if character and commitment fail,” said Reed in his address. “Like Longwood University, Pat Finnegan is about character and commitment. He is a man of decency and integrity who is committed to using his talents to help others develop their talents so that they can be the leaders of the future.”

Reed was also a classmate of Finnegan’s at Harvard University’s John F. Kennedy School for Government, where the pair graduated in 1973 with master’s in public administration degrees. Finnegan went on to earn a law degree from the University of Virginia in 1979. At U.Va., he served as an editor of the Law Review and was elected to the Order of the Coif, an academic honor society.

After graduating from U.Va., Finnegan had a distinguished career in the Army, including a three-year tour in Germany, an assignment at the JAG School in Charlottesville, and service with the XIII Airborne Corps in Fort Bragg, N.C. He served in the Persian Gulf in operations Desert Storm and Desert Shield, and was decorated with several commendations, including the Defense Superior Service Medal, Army Commendation Medal, Army Achievement Medal, Humanitarian Service Medal, Joint Meritorious Unit Award, and Saudi Arabia/Kuwait Liberation Medal.

Finnegan is survived by his beloved wife, Joan, and daughters Jenna and Katie, and several grandchildren.