For the past academic year, more than 600 Longwood students have been hard at work, studying everything from the morphology of bacterial magnetic crystals to Andrew Jackson and the nullification crisis.

Now that research will be showcased on Tuesday, April 24, in the second annual Spring Symposium for Research and Creative Inquiry. Longwood won’t hold classes that day so students, faculty, staff and interested community members can learn about all the research being done on campus.

There aren’t many universities out there where students have the kind of access to faculty that our students enjoy from day one.

Dr. Amorette Barber, biology professor and coordinator of the symposium

“We are excited to welcome the community to come experience all of the great work going on at Longwood,” said Dr. Amorette Barber, biology professor and coordinator of the symposium. “Our students have been working extraordinarily hard all year on these projects, and this is their chance to shine. We take undergraduate research very seriously at Longwood—there aren’t many universities out there where students have the kind of access to faculty that our students enjoy from day one. Often they’ll embark on joint research projects in their freshman or sophomore years, something unheard of at larger universities.” 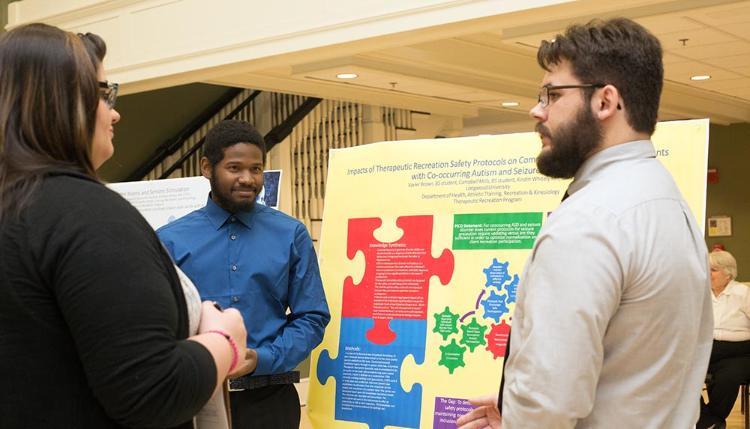 The symposium will kick off at 8:15 a.m. in Greenwood Library with the opening address by Dr. Larissa Smith Fergeson, interim provost and vice president for academic affairs, and Dr. Sarah Tanner-Anderson ’02, M.A. ’07, assistant professor of educational leadership. Dr. Robert Northington, research assistant professor at the University of Maine Climate Change Institute, will present the symposium keynote address at 12:30 p.m. in Dorrill Dining Hall. From 9 a.m. to 4 p.m. poster sessions will be presented in Blackwell Ballroom, and concurrent oral presentations will take place Ruffner Hall classrooms. Additionally, students in an advanced writing and photography class will present their work, which tells the stories of Farmville residents who lived through the public school closings from 1959-64, at the Moton Museum beginning at 3:30 p.m.

Here are a few projects that you won’t want to miss:

“The Effects of Cigarette Butt Pollution on Phytoplankton”

Science researchers found that cigarette pollution affects more than just the air we breathe; it can also cause harm to one of the most important and diverse groups of organisms found in local ecosystems: phytoplankton. Phytoplankton are microscopic protozoa that form a baseline for the food chain in aquatic environments, and the harsh chemicals that leach out of used cigarette filters littering our shores can prematurely kill them. The researchers’ experiments tested three species and found that chemicals leached from cigarette butts had a negative effect on phytoplankton viability and health.

“I have learned through researching cigarette butt pollution as a whole that is one of the most common types of litter and can be extremely harmful to the environment due to the types of metals it secretes over time.”—Amber Green ’19

“Is There an Urban Heat Island in Farmville, Va.?”

Identifying urban heat islands—areas that are significantly warmer than surrounding rural areas—impacts how cities are designed for climate resiliency, human health and environmental justice. Tennis’ research involved collecting and analyzing high-resolution temperature and locational data for the town of Farmville with the goal of identifying specific “hot spots” on a smaller spatial scale.

“While most studies use satellite imagery, only a handful have conducted research on the smaller spatial scale, giving this project a different view. Heat causes more deaths than any other weather-related hazard, even in developed countries. This gives cause to identify and find ways to mitigate UHIs.”—Dillon Tennis ’19

“Comparing the United States and Kenya Social Media Use in Elections”

Healey and Rawls examined how citizens from the United States and Kenya interpreted campaign messages delivered via social media during recent presidential elections. Basing their research on Benoit’s 2006 Functional Theory of Political Campaign Discourse, the pair examined the differences between attack, self-acclaim and defense messages. The research project developed from Rawls’ internship in Kenya, where he became interested in the way social media played a role in the recent Kenyan election.

“The Effect of Cell Phone Location on Anxiety”

With the goal of proposing an ideal universal classroom cell phone policy, this study analyzed students’ emotional states when the location of their cell phones had been manipulated. The researchers found that when students participated in the study alone or with just a few other students they were more likely to disregard instructions about where to place cell phones in the classroom. These observations led the researchers to conclude that digital natives (those who have grown up in the digital age) may have undergone a degree of desensitization regarding instructions for cell phones in classroom settings.

“We hope to use the data we gathered as a springboard for future studies to add to the limited research on the relatively untapped topic of technology’s impact on users.”— Emily Barksdale '18, Kaitlyn Cannon '18 and Lilley Fitzgerald '18

“Does Evidence-Based Practice Show Hourly Rounding Having a Positive Effect on Patients’ Safety?”

“Patient safety is important to me because the nurse is the patient advocate, and part of being an advocate means preventing anything that could infringe on that safety.”—Liz Nelson ’20

“The Pentagon Papers and Anti-War Sentiment During the Vietnam War”

Blake studied the consequences of media activity throughout the Vietnam War, devoting special attention to the release of the Pentagon Papers, which she learned were “monumentally important in prompting Americans to ask more from their country, and led to a period of distrust in the government for their deceitful behavior.”

“I am grateful for the abundant resources I was able to obtain to complete this project. I feel as though the influence of the media still is highly overlooked when examining the Vietnam War.”—Savannah Blake ’18

The full presentation schedule is available at longwood.edu/studentresearch/spring-symposium-for-research-and-creative-inquiry/