One Tuesday evening a little more than a month into his freshman year, Jaelon Hariston was learning to run the state-of-the-art equipment in Longwood University’s communication studies broadcast studio. Hariston, with a booming voice and larger-than-life personality, was using the equipment to film improv comedy skits, and had starred in two of the three student skits.

“This is awesome!” Hariston ’22 exclaimed after getting a crash course in operating the large broadcast TV camera. “We have to use those!” he said when he found out the studio has life-sized cardboard cutouts of Ron Burgundy and Godzilla.

Communications is not really our thing, but we are all really enjoying it. I’m excited that we get to do this, and I’m making a lot of friends. 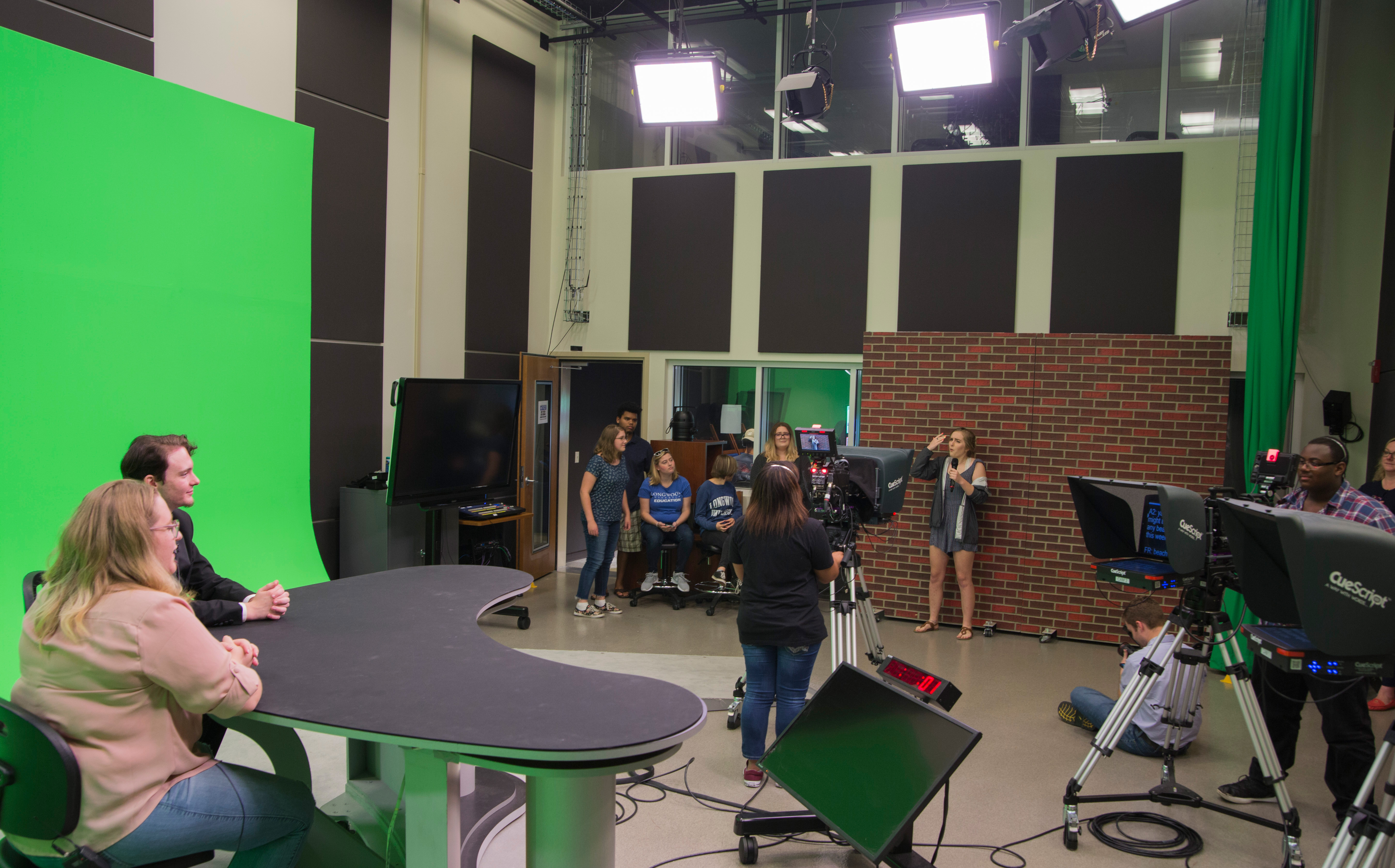 Hariston is one of the students in Clint Wright’s first-year coaching group—an innovative new approach to helping freshmen acclimate to college life that Longwood introduced and piloted in the fall semester. The 60 groups, led by faculty and staff coaches and built around shared interests, provide the kind of mentoring support that has long been one of Longwood’s trademarks. Wright, the broadcast studio managing editor, leads a group made up mostly of art majors who are interested in film and performance.

Wright applied to be a first-year coach because he liked the idea that he’d be able to give new Longwood students a sense of direction. With his access to the professional studio equipment—what he likes to call his “playground”—he knew he could give his group something tangible that they could focus on and have fun with.

“Coaching groups are an interesting concept,” he said. “It’s this idea of creating a noncurricular experience that allows students to come together and create a sense of belonging their freshman year that is not necessarily tied to a faculty member they deal with on a daily basis. If they have questions, I’m a point of contact for them to go through to help them work out those problems.”

Coaching groups provide a way to connect with other similar students in the early weeks of college, which can be overwhelming and sometimes confusing

According to Dr. Emily Heady, senior director of student success and retention, the coaching-group model is a best practice in use at a number of colleges and universities. But Longwood is one of the few to offer it to all incoming students.

“Coaching groups provide a way to connect with other similar students in the early weeks of college, which can be overwhelming and sometimes confusing,” Heady said. “They offer a safe space for students to ask a question about how to navigate college life or simply to admit that they’re struggling. They also give those of us at the university who support students another way to help everyone stay on track for graduation.”

There are some early indications that the implementation of the coaching groups has been a success, including a significant reduction in the overall number of freshmen who ended their first semester on academic probation.

The coaching groups are built around shared interests. The majority of students in Wright’s group—16 out of 18—are graphic and animation design majors. They were placed together in his group because they all responded they had an interest in film and movies in a survey prior to orientation.

For these students in particular, they’ve found something with this group that means something to them. Or at least something that means enough for them to be in the same room and have a good time together. Friends are a huge part of the college experience.

After meeting for the first time and learning they had access to the broadcast studio, the students decided that filming a sketch comedy show would be a fun project for their group to undertake. They decided to meet weekly to brainstorm ideas and write content. Some of the initial students in the group fell away as the semester progressed, but other friends of group members joined along the way.

The students in Wright’s coaching group spent close to two hours in the studio filming three sketches for their initial episode of “Skit Happens.” They filmed two subsequent episodes during the rest of the fall semester. They were responsible for writing the scripts, got experience running the cameras and sound boards, and also gained exposure to some of the video editing process.

Sarah Scott ’22, the star of one of the first improv skits, said she was excited to be trying something different and outside her comfort zone. It was clear she likely wouldn’t otherwise have had access to this experience—and certainly not this early in her college career.

“I’m a graphic design and animation major, so I like to draw,” she said. “Communications is not really our thing, but we are all really enjoying it. I’m excited that we get to do this, and I’m making a lot of friends.”

Scott later said she shared the rough cut of the first skit with her parents on Facetime.

The students had so much fun with the project, they plan to continue the effort by forming an official club on campus. They have already picked a club name—Studio 105, which is the room number of the broadcast studio in French Hall.

Wright said the coaching groups are a great way of giving incoming freshmen that initial sense of being in a tight-knit community—something many were used to in high school. Sometimes students struggle to connect and find that community when they come to college, even at a place like Longwood where a sense of family and tight-knit community are hallmarks. The coaching groups can also help to spur creativity and collaboration—also hallmarks of integrative learning at Longwood

“Being in a studio setting like this can certainly give them the opportunity to do some very fun things that wouldn’t necessarily be part of their normal course work,” Wright said. “For these students in particular, they’ve found something with this group that means something to them. Or at least something that means enough for them to be in the same room and have a good time together. Friends are a huge part of the college experience.”