There’s a theme song, joking around, special guests, a band and thousands of views from devoted fans.

It’s not “The Tonight Show” or “The Late Show with Stephen Colbert”—it’s “The Justin and Lauren Show,” coming to you live from the Arlington, Virginia, living room of Justin Trawick ’04, and his girlfriend, Lauren LeMunyan.

On March 12, my first show was cancelled because of the coronavirus. Lauren and I decided to do something on Facebook live instead.

Streaming at 8 p.m. every Sunday and Thursday evening via Facebook, the show not only has hooked fans from around the country and abroad, but also attracted the attention of Washingtonian Magazine, the Washington Post, Reuters and CNN.

Now none of us, including Trawick, would say the pandemic has been a good thing. For him personally, stay-at-home orders beginning in March resulted in the postponement or cancellation of numerous live shows for his band, Justin Trawick and The Common Good, a successful regional group that favors Americana music. “On April 23, we were booked at the Charm City Bluegrass Festival in Baltimore. I’d been trying to get in there for 10 years,” he said, giving one particularly disappointing example. 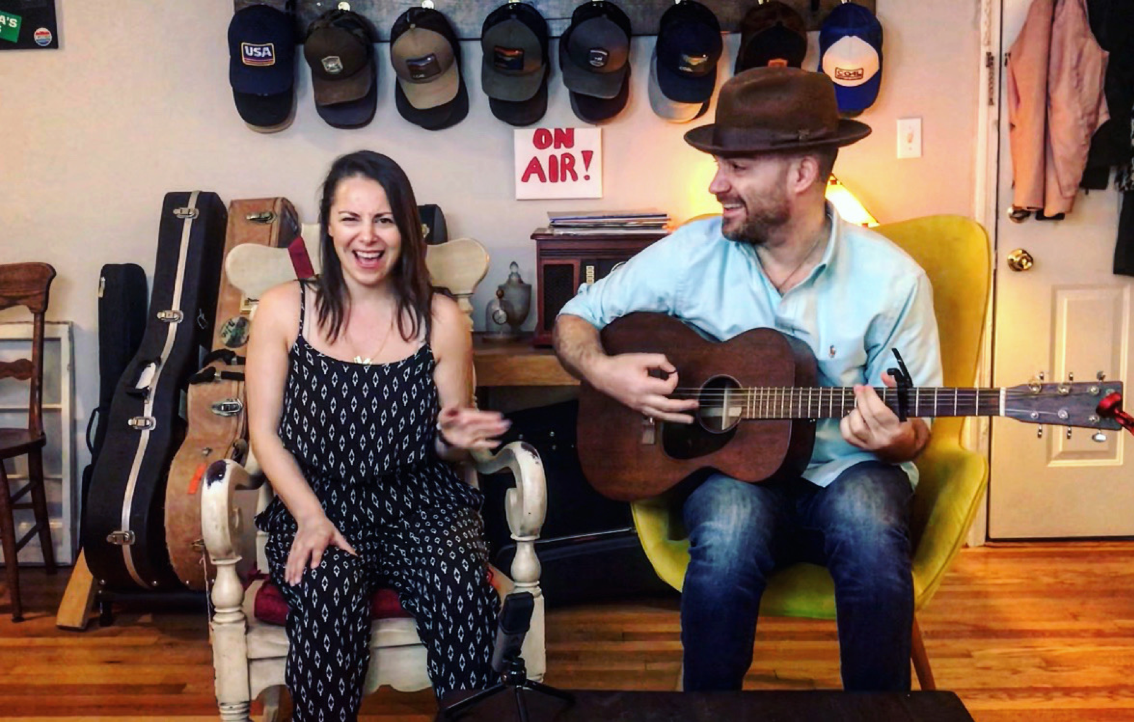 I never would have considered doing a show like this regularly before all this happened. I think going forward, we’ll continue to do it once a week. Touring, I don’t go to Iowa or to Portugal, but by doing this show live on Facebook we can bring all those people around the world together.

A full-time musician, Trawick could easily have seen the impact of the pandemic on his livelihood simply as a disaster. But entrepreneurial and optimistic by nature, he saw something else: opportunity.

“On March 12, my first show was cancelled because of the coronavirus,” said Trawick. “Lauren and I decided to do something on Facebook live instead.”

That first show was streamed more than 4,000 times, Trawick said, so they did another one, which also streamed more than 4,000 times. Both shows featured a hand-made sign directing viewers to a virtual tip jar. When they made enough money from the first two live streams to cover the losses from five cancelled in-person shows, Trawick knew they were onto something. The media picked up on the popularity of “The Justin and Lauren Show” right away, with the first story in Washingtonian magazine published on March 16, with the Reuters and the Washington Post features following within a week.

First, they were early to live streaming by musicians whose in-person gigs had been cancelled due to the pandemic. “Chris Martin from Coldplay was the first big celebrity who did a streaming show, and his was a couple of days after ours,” said Trawick.

“Early on we realized that would not be the way we could most impact people and get their attention,” he said. “Instead, we try to do it like a TV show. We talk about our day. We’ve done skits, and we’ve interviewed people—like Tony Lucca, who was on ‘The Voice.’”

Viewers can post comments during the show, and Trawick and LeMunyan respond, in addition to welcoming viewers by name as they join.

One regular viewer commented, “You guys do the funnest covers. You are seriously giving me life right now!” Another commented, “Only you can argue and blame each other in the middle of a song and not miss a beat, lol.”

Even after Covid-19 restrictions are lifted, Trawick plans to keep “The Justin and Lauren Show” going.

“I think we’ve actually built a fan base vs. just keeping one,” he said. “We’re building a community of people who know each other and tune in every time.

“I never would have considered doing a show like this regularly before all this happened,” Trawick continued. “I think going forward, we’ll continue to do it once a week. Touring, I don’t go to Iowa or to Portugal, but by doing this show live on Facebook we can bring all those people around the world together.”

Tune into “The Justin and Lauren Show” here: https://www.facebook.com/justintrawickmusic/