Emmy win for Lancer came as a surprise

Sam Chase ’21 never thought an Emmy award was in his future, much less as the punctuation mark on his graduation from Longwood.

In fact, the project that earned him the elite award almost didn’t make it past a routine photography project. But then Chase started hearing stories that moved him to pick up a video camera and get to work.

“I got this idea of documenting history as it happens,” he said, “and what could be better than history happening down the street from where you live? Once I started talking to people, I realized there were a lot of stories of courage to tell in this moment.”

The moment was the first protest in Farmville that was organized following the death of George Floyd in summer 2020. The short-form documentary that followed, Civil Circuit, became Chase’s senior capstone project. His advisor, Dr. Ryan Stouffer, associate professor of communication studies, urged him to submit the documentary to the Regional Emmy competition.

I was nervous about [submitting for an Emmy] again—that rejection was tough the first time—but I tried not to think about myself, only about the story and the people, and how important it was to get involved. 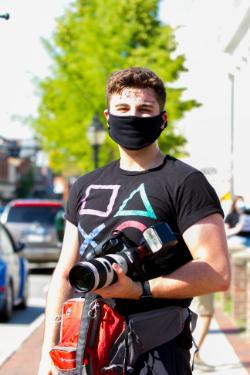 There were moments of self-doubt, though, that almost sank the project.

“I had submitted a documentary video to the Regional Emmys as a junior and was turned down,” said Chase. “I was nervous about doing it again—that rejection was tough the first time—but I tried not to think about myself, only about the story and the people, and how important it was to get involved.”

In the end, it was the helpful prodding of Stouffer that pushed the 17-minute documentary over the finish line and to national recognition as an Emmy award-winning film.

“Dr. Stouffer believes in his students,” said Chase. “He constantly made sure that I expressed myself not only in the best way I could but in the most correct way I could. And, even though I had a lot of moments of self-doubt, he found a way to give me enough confidence to see the project through to the end and push me to put it out there in a big way.”

It’s hard to imagine that the same freshman is now a graduate who has won an Emmy. It’s a testament to his hard work and growth as a person and journalist.

In summer 2020, protests broke out across the nation following the death of George Floyd. In Farmville, protests and marches were organized by a group of women who take center stage in Chase’s documentary. The women offer an inside look at how the local movement came together, culminating in a march through historic downtown that was reminiscent of the famous 1951 walkout at Robert Russa Moton High School led by Barbara Johns.

“It was important to me that I put these protests in as much local context as I could,” said Chase. “This area has such a rich history—and a very activist one—and I’m happy to be a part of carrying that on.”

“Sam is a wonderfully talented photographer and filmmaker,” said Stouffer. “Even though it’s hard sometimes for him to trust himself, I really saw him come into his own through four years at Longwood. It’s hard to imagine that the same freshman is now a graduate who has won an Emmy. It’s a testament to his hard work and growth as a person and journalist.”