In a moment reminiscent of a last-second, game-winning shot, the crowd counted down as Joan Perry Brock, wearing a No. 64 Longwood Lancers jersey, placed her hands into wet cement to officially mark the construction of the game-changing convocation center that will soon bear her name.

Brock ’64, whose philanthropy has already left an indelible mark on her alma mater, along with assembled Longwood dignitaries and guests, on Friday celebrated the construction of the “stunningly beautiful” Joan Perry Brock Center already taking shape behind them.

Watch it take shape with our live webcams >>

Standing beside her, President W. Taylor Reveley IV led the crowd in a cheer that echoed across the construction site and to Brock Commons, foreshadowing the energy that will pervade the arena during Longwood basketball games and special events when the center’s doors open in summer 2023.

One hallmark of the philanthropy of Joan Perry Brock and her late husband, Macon Brock, is investing in beauty. Beauty like this building is something that unites campuses and communities.

Brock joined Reveley, faculty and staff, and other Longwood officials to celebrate the start of construction of the “JPB,” a transformative facility in the heart of Longwood’s campus and just steps from Main Street Farmville. The center will serve as a venue for university and community events, including ceremonies, lectures and concerts, as well as the signature home court for Longwood’s men’s and women’s basketball teams.

Construction has already begun, supported by the largest gift in Longwood’s history, a $15 million contribution from Brock. With a seating capacity of up to 4,500, it will be the largest indoor event venue in the region.

“One hallmark of the philanthropy of Joan Perry Brock and her late husband, Macon Brock, is investing in beauty,” said Reveley. “Beauty like this building is something that unites campuses and communities. 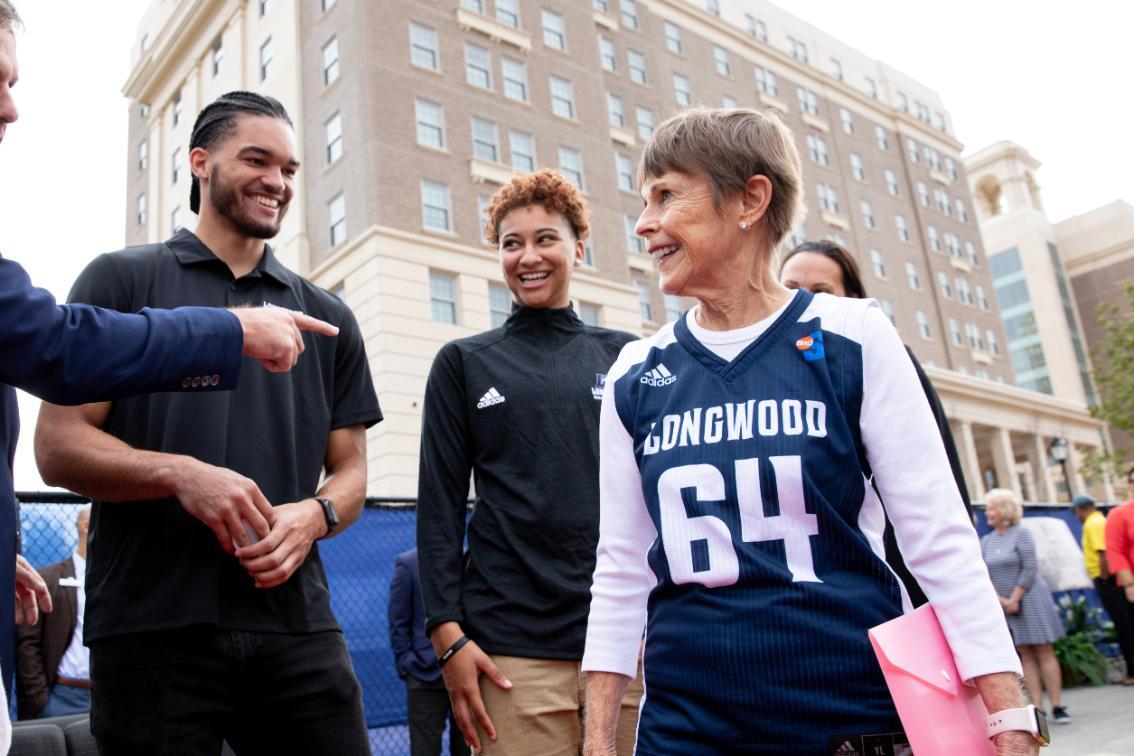 My real hope is that this facility will make this town and Southside Virginia that much more welcoming for everyone.

Much more than a home for Longwood’s basketball teams, the vision for the Joan Perry Brock Center is to serve as a community hub—a destination that will draw visitors to Farmville’s historic downtown.

“This will be a special place not just for the basketball teams and Longwood students but for the whole town,” said Brock. “My real hope is that this facility will make this town and Southside Virginia that much more welcoming for everyone.”

Longwood Board of Visitors Rector Pia Trigiani, who has been witness to several significant milestones in the last seven years, including the adoption of a Master Plan that works to integrate Longwood into the Farmville downtown community, echoed that vision.

“We celebrate the great possibilities of this building,” said Trigiani. “This is a great dream for Longwood. The Joan Perry Brock Center will serve as another place to create community with Farmville and Southside. It will be a place to cheer, and a place for orators and thought leaders to come, and for us to feed our athletic and artistic souls.”

In anticipation of Friday’s ceremony, leaders of Longwood Athletics reflected on the significance of the new facility.

“While this project has been years in the making, the progress that has already been made makes it all the more real,” said Longwood Athletics Director Michelle Meadows. “The Joan Perry Brock Center will be a beacon for not only Longwood basketball but Longwood University and the Farmville community as a whole.”

With a 3,000-spectator capacity, the new home for men’s and women’s basketball “holds the potential to significantly impact our entire community while providing a premier venue in which to play college basketball,” said Longwood men’s basketball head coach Griff Aldrich.” I am so grateful to be here during this moment of our University’s history, and I believe this facility will significantly propel our university and community forward to new heights.”

When the Joan Perry Brock Center opens in 2023, it will take its place among the top tier of Big South arenas, while preserving the intimate feeling of Willett Hall, where games currently are played. The Jerome Kersey Court, dedicated in December 2016 in honor of the late NBA star and Longwood’s most accomplished basketball alumnus, will transfer to the Brock Center from Willett, which has been host to nearly 1,000 basketball games since it opened more than 40 years ago. It also was the site of the 2016 Vice Presidential Debate.

Longwood women’s basketball head coach Rebecca Tillett noted that “the idea for the center was made possible by an empowered woman in Joan Perry Brock. There is a saying that facilities do not win championships, people do. However, with Mrs. Brock’s generous gift, the additional gifts of many dedicated supporters, and the vision of President Reveley, the future home of Longwood basketball will provide a state-of-the-art facility for our people to do the work.”

Brock’s $15 million gift is the latest in a decades-long philanthropic relationship with her alma mater that includes the construction of the signature Brock Commons on campus and the establishment of the Brock Experiences, in which students study pressing issues of the day in places around the United States most affected by those issues. 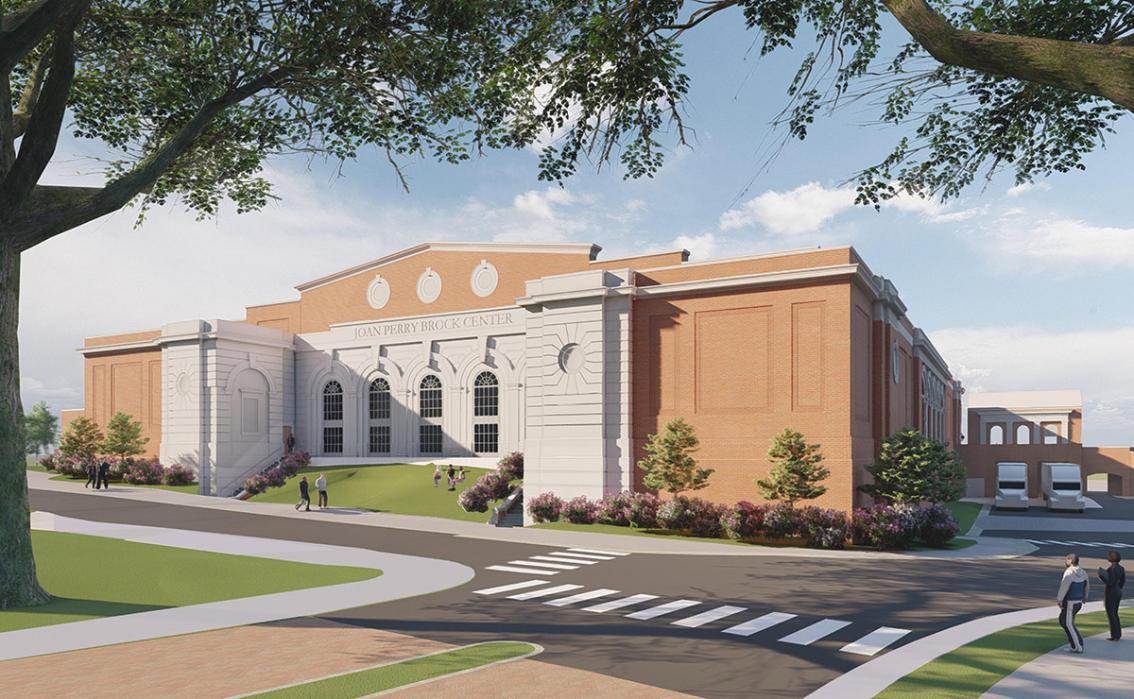 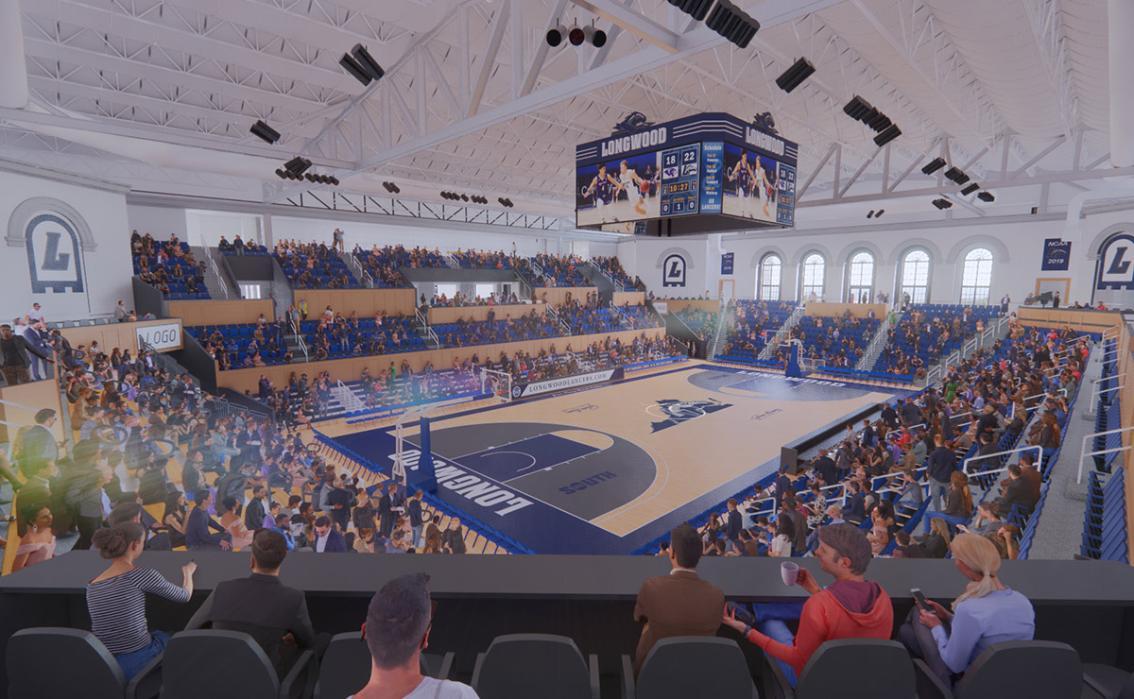