It is a place that resonates with the legacy of Gerald Baliles – on education and the environment, his beloved Southside home region that Longwood serves, and the Chesapeake Bay.

The change becomes official Wednesday, along with the opening of a new $1.2 million environmental research lab that will expand the scope of work and student experiences at the 662 acre preserve in Westmoreland County, near the mouth of the Potomac River on the Chesapeake.

Gov. Ralph Northam, members of the Baliles family and numerous friends and colleagues of the former governor, who passed away in 2019, will be on hand to celebrate the new facility. It will stand as a living, working monument to a pivotal lawmaker and leader who – as a General Assembly member, Virginia attorney general, and then governor from 1986-1990 – arguably did more than any other public official in the nation to set in motion the modern transformation toward a healthier Bay.

As governor, Baliles led efforts crafting the 1987 Chesapeake Bay Agreement that pinned down commitments across the mid-Atlantic for reducing pollution and improving water quality. Baliles championed the landmark Chesapeake Bay Preservation Act as well, spearheaded by Del. Tayloe Murphy, who represented the Northern Neck in the General Assembly. Murphy, who passed away earlier this fall, was instrumental too in the legal structuring of the gift of the Hull Springs property in 1999 by Mary Farley Ames Lee ’38 for her alma mater.

“The more I visited it over the years, when I saw the opportunities this expansion and growth offered to Longwood and its students, it just struck me that this is something that Jerry Baliles would think was a wonderful thing,” said John Daniel, who early in his career was appointed by Baliles as Virginia’s first Secretary of Natural Resources, and is also a former member of Longwood’s Board of Visitors and the current president of its Real Estate Foundation, which has overseen the planning and construction of the new lab facility. “The most rewarding part has been the enthusiastic reception from his family about how he would have loved this.”

Daniel’s long career is just one of many points of connection between Longwood and Baliles, who received a Longwood honorary degree in 1986, early in his tenure as Governor. Longwood President W. Taylor Reveley IV worked closely with Baliles for more than a decade, first at the Richmond law firm then known as Hunton & Williams, and then as Baliles’ deputy at the University of Virginia’s Miller Center, which the former governor led. Longwood Rector Pia Trigiani also had close connections to the former governor, especially through their roles with the Virginia Bar Association.

My mentor and great friend, [Gov. Baliles] had such far-sighted vision for the Commonwealth, and his example and his love for the Chesapeake will inspire our students for generations to come.

“It is a deep honor for Longwood to carry forward Gov. Baliles’ legacy this way, and it is deeply meaningful for me and many others,” said President Reveley. “My mentor and great friend, he had such far-sighted vision for the Commonwealth, and his example and his love for the Chesapeake will inspire our students for generations to come.”

Longwood has been bringing students and conducting research at the site for more than two decades, but that work is poised for a transformational expansion to accompany the new name. New improvements include broadband Internet, essential for scientific work, and other infrastructure upgrades made possible with help and support from the Northern Neck Planning District Commission, Westmoreland County and Atlantic Broadband.

But the signature expansion is the 3,000 square foot research lab, supported by a $250,000 challenge grant from the Mary Morton Parsons Foundation, and featuring essential equipment including a rain-harvesting system, built-in fume hood and associated HVAC, refrigeration units and other critical lab equipment.

Among the Longwood programs active at the site is Longwood’s LIFE STEM Summer Scholars program, recently awarded a $1.5 million National Science Foundation Grant, which includes a week-long summer bridge program at the property.

Biology Professor Dina Leech, her husband and fellow biology Prof. Ken Fortino and their colleague environmental scientist Kathy Gee are among the Longwood faculty deeply invested in the property. They and others have seen most clearly how field research can transform students – particularly those who aren’t yet sure if science is for them.

Not only are [Longwood students] getting to put into practice what they’ve learned in the classroom, but they’re also helping contribute to solutions.

“One of my students recently said I feel like I’m really doing science - things that we’ve been talking about in the classroom become real when we take them out in the field,” Leech said. Time spent engaged in field work changes and sticks with them, she said. And it complements their learning on campus profoundly. “Not only are they getting to put into practice what they’ve learned in the classroom, but they’re also helping contribute to solutions,” she said. “They feel empowered and involved.”

The new research lab will have a huge practical impact, improving and expanding the Longwood Environmental Observatory (LEO) project, as well as facilitating water quality studies and experiments. Previously students and faculty working on water quality sampling would have to drive from Farmville to the property, collect samples, and then frequently drive immediately back to campus so the time-sensitive samples could be studied and processed back in labs on campus.

Now, that work can be done on site, saving travel time and allowing students and faculty to take on a broader range of activities. Or, as Leech puts it: “less driving, more science.”

Daniel says his countless visits to the site over the years have persuaded him how powerful the work that takes place there can be for students – and how much it could be energized with new facilities. The next stage of planned development includes additional cabins to accommodate students on extended overnight visits, so more people can experience the property’s benefits and magic, and for longer. Overseeing the master planning and development process, in partnership with Longwood’s REF and academic leadership, is Director Sherry Swinson.

Sneak Peek at the Research Lab 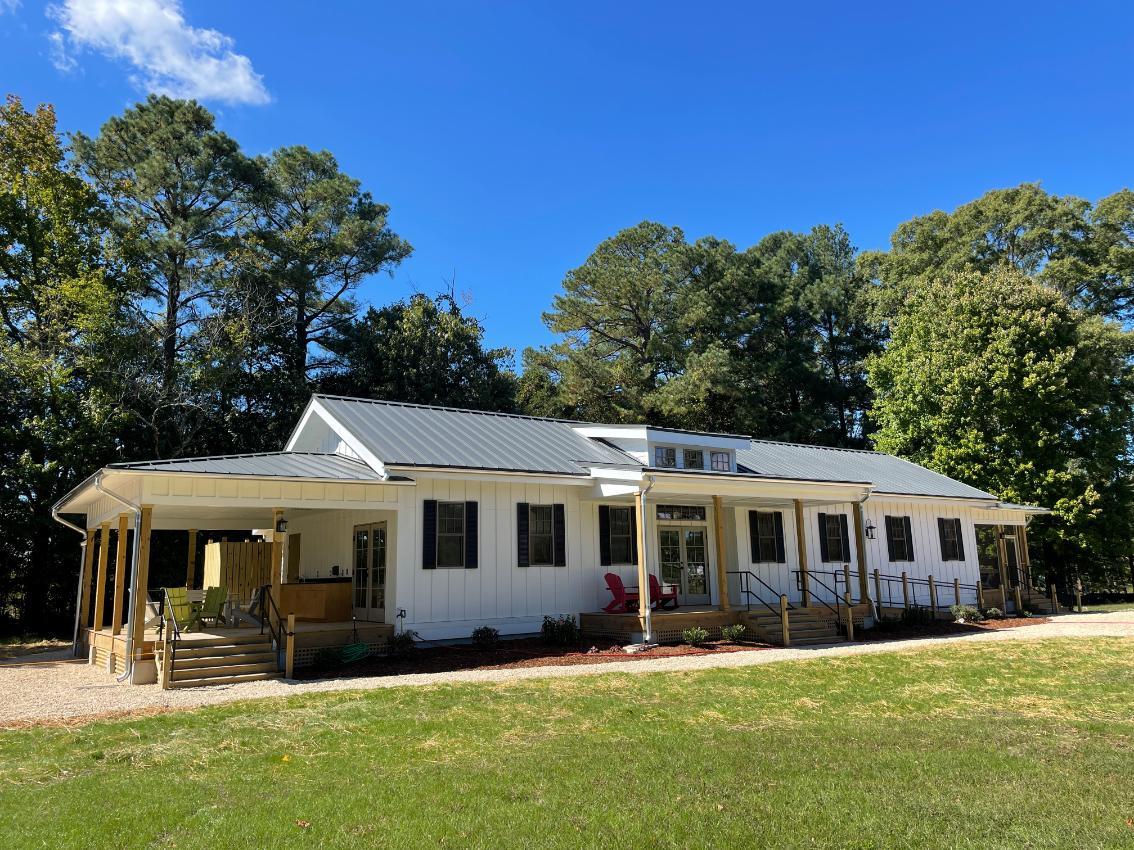 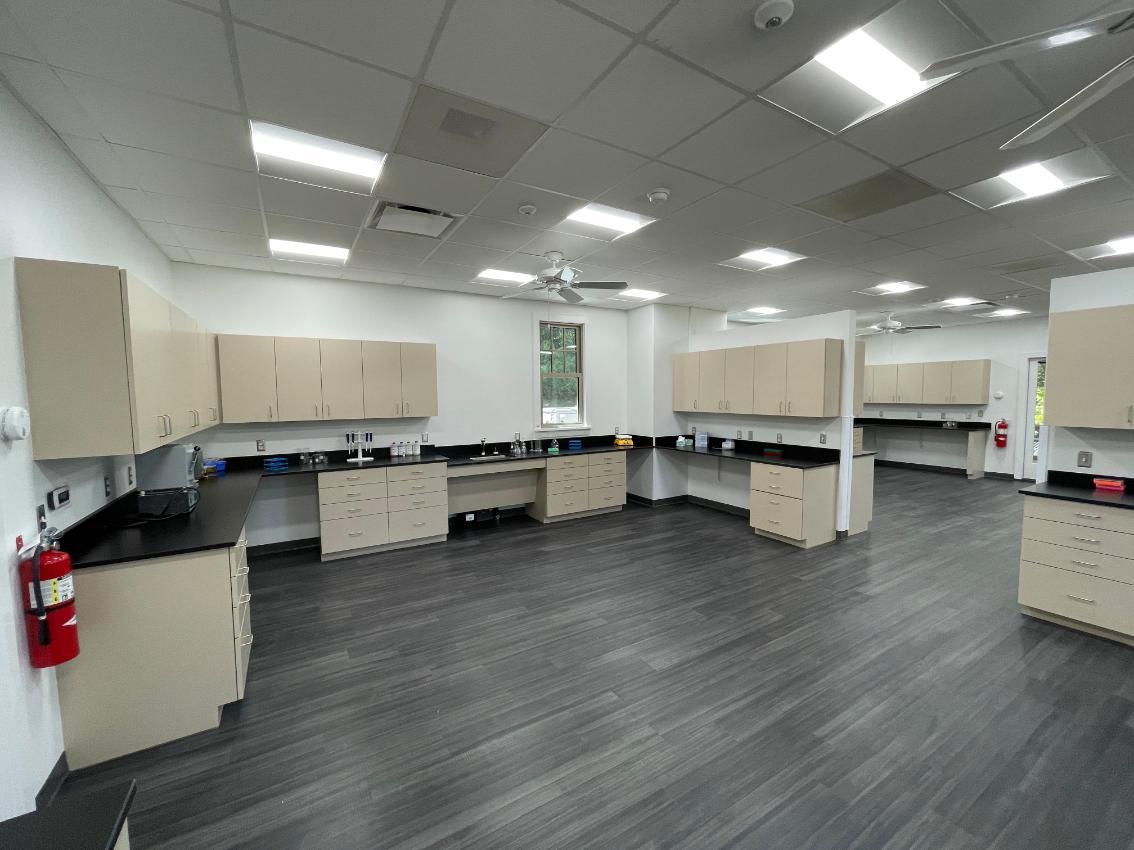 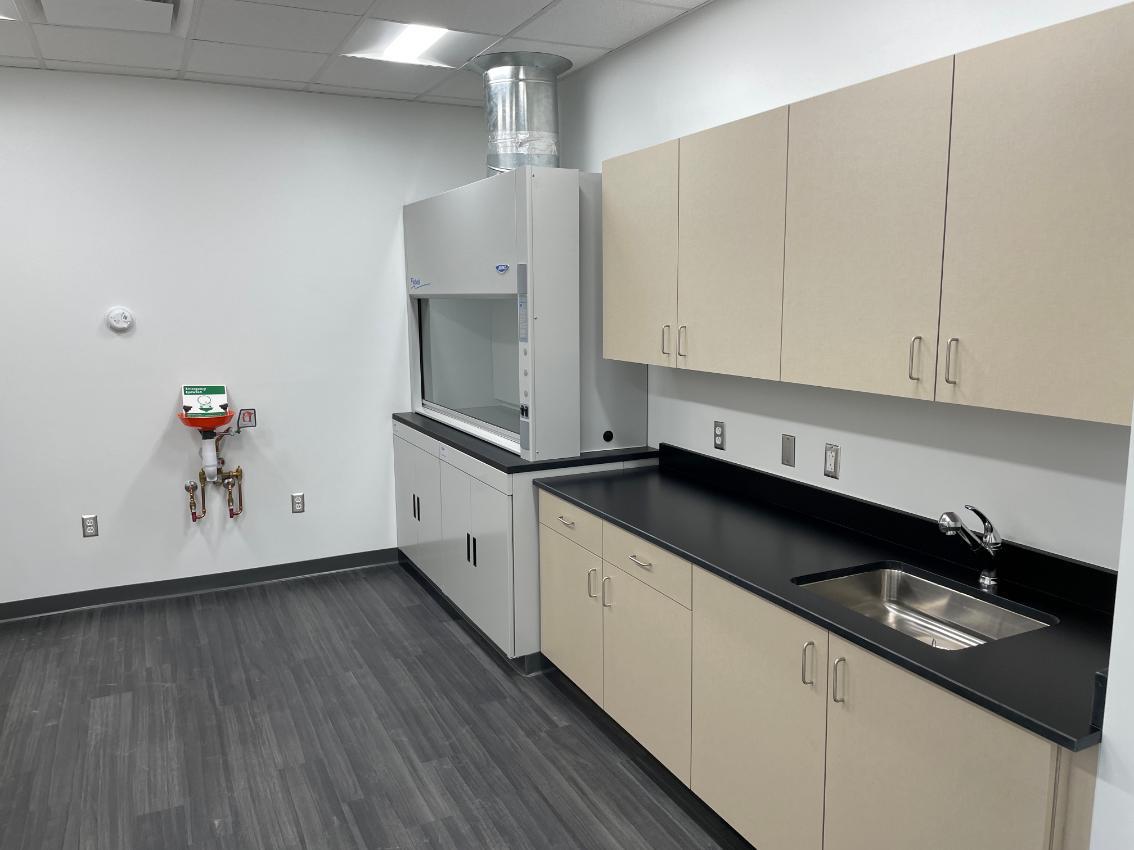 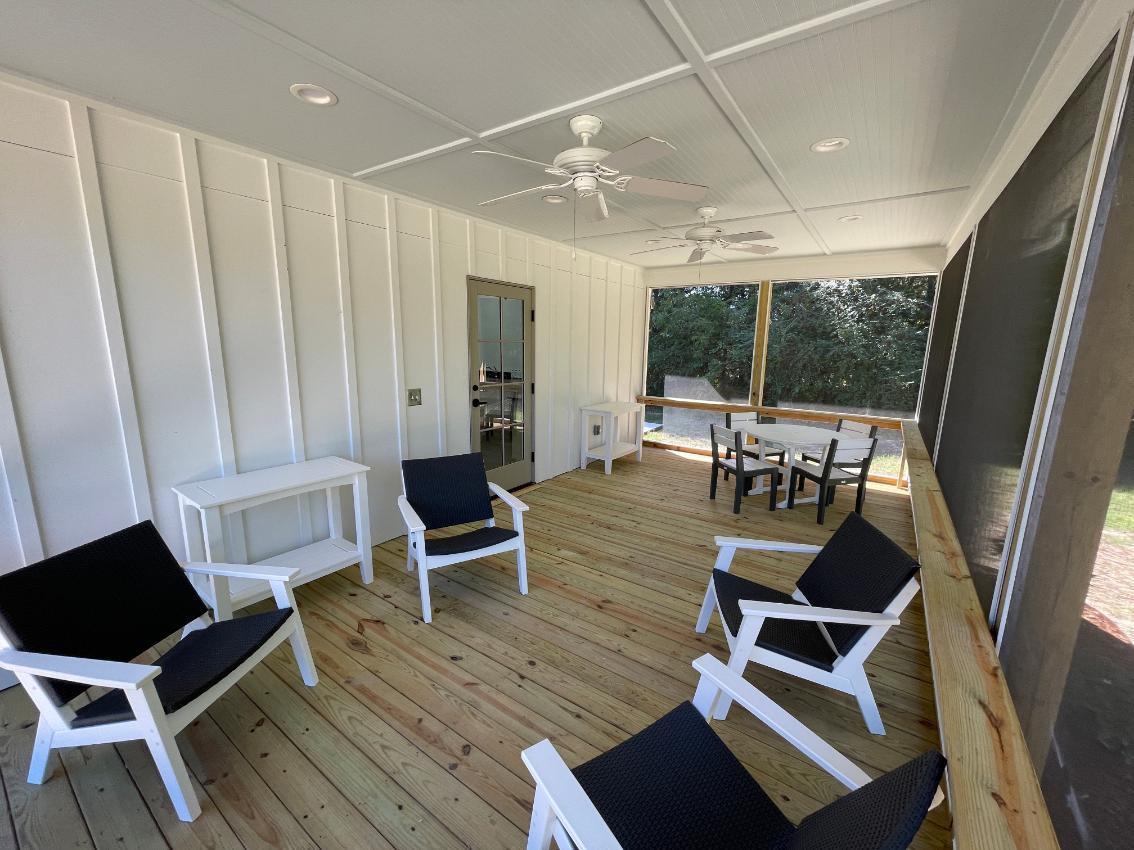 Swinson and Daniel both see the research lab opening up new grant opportunities, and chances to expand work with partners who also do research on the Bay, notably Virginia Commonwealth University’s Rice Rivers Center, and the Virginia Institute of Marine Science at the College of William & Mary.

Of course, those partners are also friendly competitors. Daniel knows the landscape of environmental stewardship organizations as well as anyone in the Commonwealth, and says Longwood can now take a leading position in terms of attracting faculty and students, who will also have advantages in whatever next steps they pursue. “You’re sitting there in the room waiting for an interview, and the student from Longwood who has had the opportunity to learn about the outdoors, to value the environment, to understand environmental change, to really put their hands on this kind of work and get dirty and excited about it, they’re going to walk out of there with the job,” he said.

The nexus between education and the environment, Daniel said, is why it was so natural to name a place so prominently focused at the intersection of education and environmentalism after Gerald Baliles.

“First and foremost, he always believed that education was the foundation for a better future,” Daniel said. “He always promoted education, even when he was talking about economic development.” Daniel recalled how courageous and distinctive it was at the time to establish a cabinet post for the environment – on equal footing with others supporting areas like commerce and trade.