But most importantly, it flew in the rubble of the South Tower for nearly two months after Sept. 11, 2001.

Since then, a group of veterans has been transporting the Ground Zero Flag Team–an American flag and marble cross shaped from the ruins of the World Trade Center towers–around the world in remembrance of the lives lost and as a tribute to the first responders who gave their lives more than two decades ago.

The flag made its way to Longwood just days before Veterans Day, delivered by Mark Kendrick, associate vice president for information technology services, on his blue three-wheeler motorcycle. A veteran who served six years in the Air Force and a member of the Patriot Guard Riders, a group composed mainly of veteran motorcyclists from around the country, Kendrick takes the mission of escorting a flag extraordinarily seriously.

When you handle this flag, you realize it not only represents the thousands of people who died on September 11, but also the first responders who were at Ground Zero. 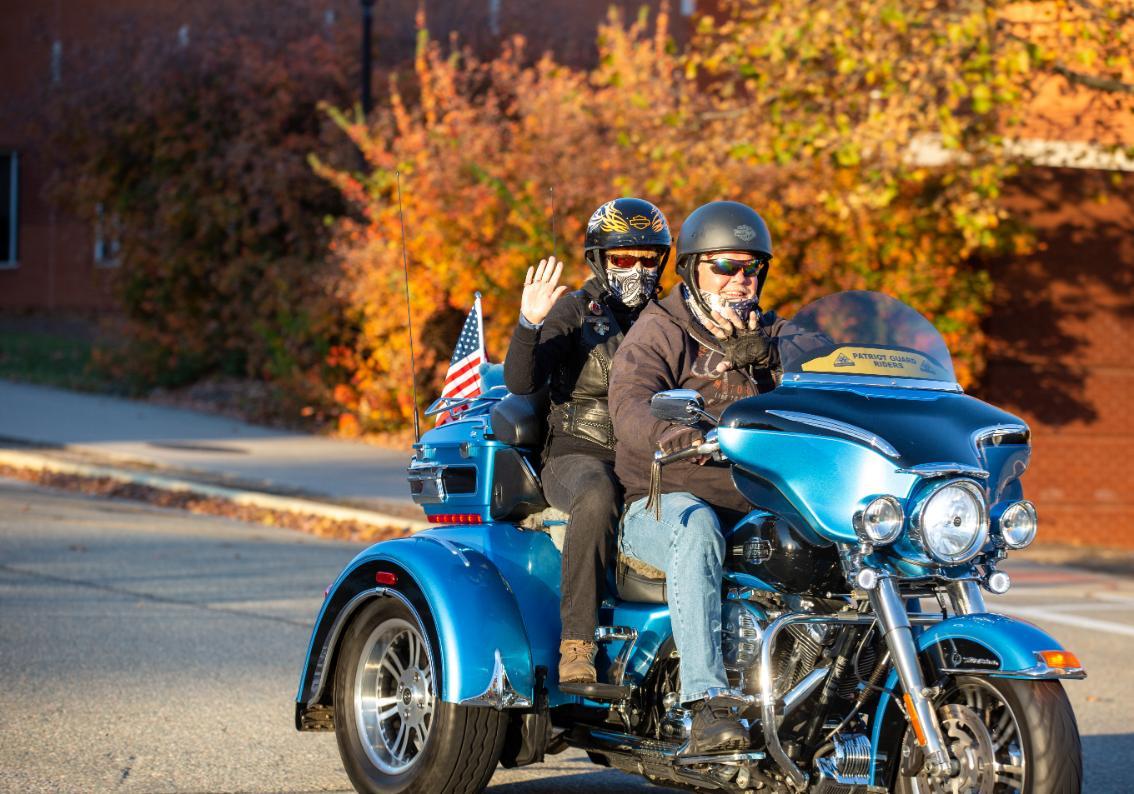 “When you handle this flag, you realize it not only represents the thousands of people who died on Sept. 11, but also the first responders who were at Ground Zero,” he said. “And it represents the troops who put their lives on the line every day to defend our nation. It’s an honor for me to be entrusted with the responsibility of sharing that symbol with communities around Virginia.”

Wearing a black leather motorcycle vest with the word “veteran” emblazoned across the back along with a large patch that reads “The nation which forgets its defenders will itself be forgotten,” Kendrick looks every bit the part of a biker. But if you’re expecting a gruff, cocky outlaw, think again. In fact, he’ll hardly talk about himself or his own service, preferring instead to focus on quietly doing his part to support fellow veterans and helping communities honor those who sacrifice.

A member of both local chapters of the American Legion and Veterans of Foreign Wars, Kendrick two years ago spearheaded the display of a flag made from the dog tags of fallen soldiers in Farmville. And he regularly delivers supplies to VA hospitals around the state with other riders.

This trip—the third time Kendrick has escorted the Ground Zero Flag on his motorcycle—started in Salem, where the fire department has a flagpole made of steel beams from the Trade Center towers.  From there, the flag has stopped in Bedford, Lynchburg and Appomattox. Kendrick wanted to bring it to another place where he’s given years of service: Longwood. It’s the first time it’s been to Longwood, and the first time it’s been to a university.

“President Reveley always makes the point that this generation of students grew up and were shaped in the wake of Sept. 11,” he said. “I thought it would be fitting for it to rest here because of that."

It needed to be displayed here. It needed to be brought here. On September 11, we all came together as one people, and to have it here on Election Day hopefully reminds people that we are all one nation.

“To be able to bring a piece of history to a campus that is so steeped in history—it’s hard to describe the feeling,” he said. “It needed to be displayed here. On Sept. 11, we all came together as one people, and to have it here on Election Day hopefully reminds people that we are all one nation. I appreciate all the support from different areas of campus, from Lt. Stuart Raybold at Longwood University Police and Longwood ROTC to Dean Brent Roberts at Greenwood Library.”

The flag was displayed for about 28 hours in Greenwood Library before moving onto its next stop in Crewe.

With the flag and the marble cross travels a log book—the fifth volume—that carries the names and patches of veterans, departments and civilians who have escorted the flag around the world for more than two decades.

“You just never know who it’s going to touch,” said Kendrick. “We stopped for lunch on our way here and were telling the story to another Longwood employee, and his wife started crying. It turned out she had a good friend in Tower 2, and her brother walked through the rubble to find his family. When you hear stories like that, you understand what kind of mission you’re on.”

Which is why, when it comes time to leave, Kendrick and his wife, Alison, also an Air Force veteran, will only handle the flag while wearing white gloves. And why, amid the hubbub of afternoon campus life, there’s a pause as Kendrick stands at attention and gives a slow salute before locking the Ground Zero flag safely in his blue cargo case, strapping on his helmet and heading off east.