The Spring Student Showcase for Research and Creative Inquiry was held on April 20 and featured more than 250 student presentations from class research and independent research projects. The event returned to an all in-person format for the first time since the start of the pandemic, and once again Blackwell Ballroom was buzzing with scholarly sounds and inquisitive flourishes as students presented their research.

The showcase featured a mix of poster presentations, oral presentations, performances and visual arts displays from undergraduate and graduate work. Conducting student research is a hallmark of a Longwood education, whether it takes place in a chemistry lab or a dance studio. Undergraduates who undertake research gain confidence to work independently, experience in working collaboratively and develop better communication skills.

[Find out more about student research opportunities at Longwood.]

Here are 10 interesting things we learned from Longwood students’ research projects and proposals, in no particular order: 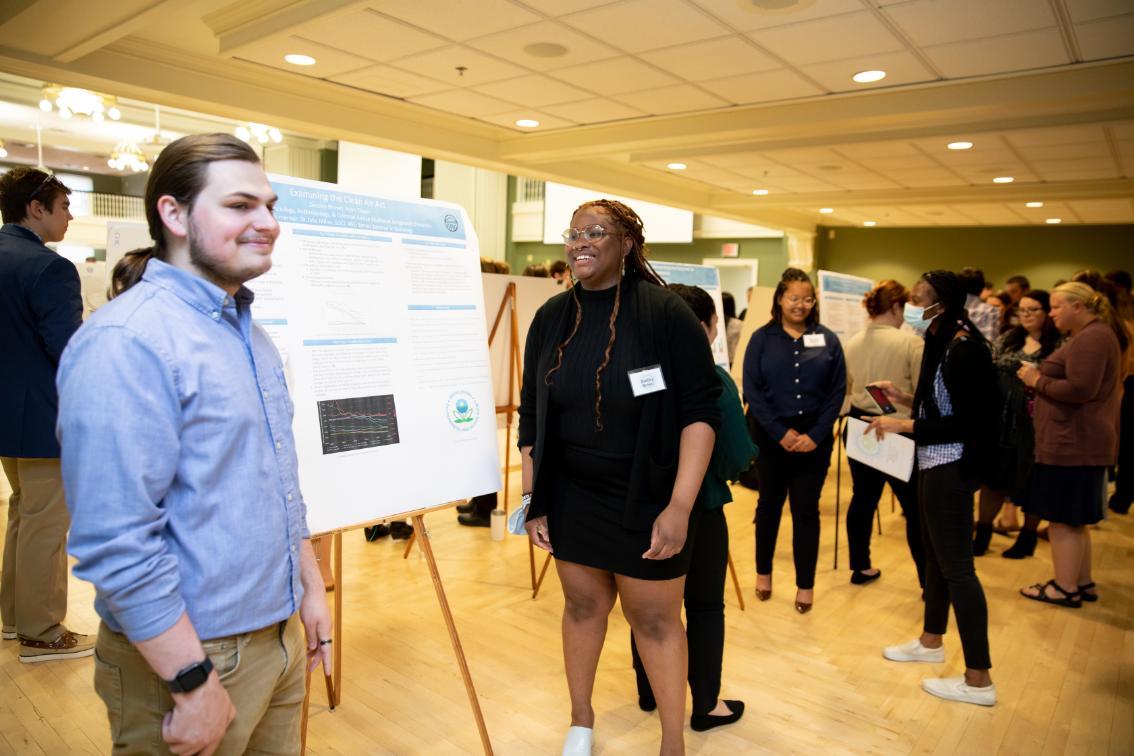 Destiny Brown’s '22 and Ryan Tingen’s '23 research of the Clean Air Act led them to discover one of the worst air pollution disasters in U.S. history unfolded in 1948 in a small factory town southeast of Pittsburgh. The fog from multiple factory buildings built up severely over five days, ultimately killing 20 people. Another 50 residents died within a month of respiratory causes. The event is credited as one of the major incidents that led to the development of the Clean Air Act.

Covid-19 has a good chance of becoming a zoonotic disease that could re-infect humans and other animals. Cecily Hayek’s '22 proposed research would look into vaccination for zoo animals to protect them from infection of Covid-19. The ultimate goal would be to develop species specific vaccines and to enforce a vaccination protocol at zoos to help prevent new strains from evolving and more animals from becoming sick.

3. During the Revolutionary War approximately 100,000 slaves escaped and one-third of them were women.

In the course of her research Courtney Grady '23 found that during the Revolutionary War many slaves escaped from their plantation homes and followed the British Army in hopes of obtaining freedom. Grady specifically researched three female slaves—Black Sall, Isabel and Judy—who lived at Elk Hill, a plantation once owned by Thomas Jefferson and his wife. All three attempted escaping slavery in 1781, but two were discovered and returned and the third died. 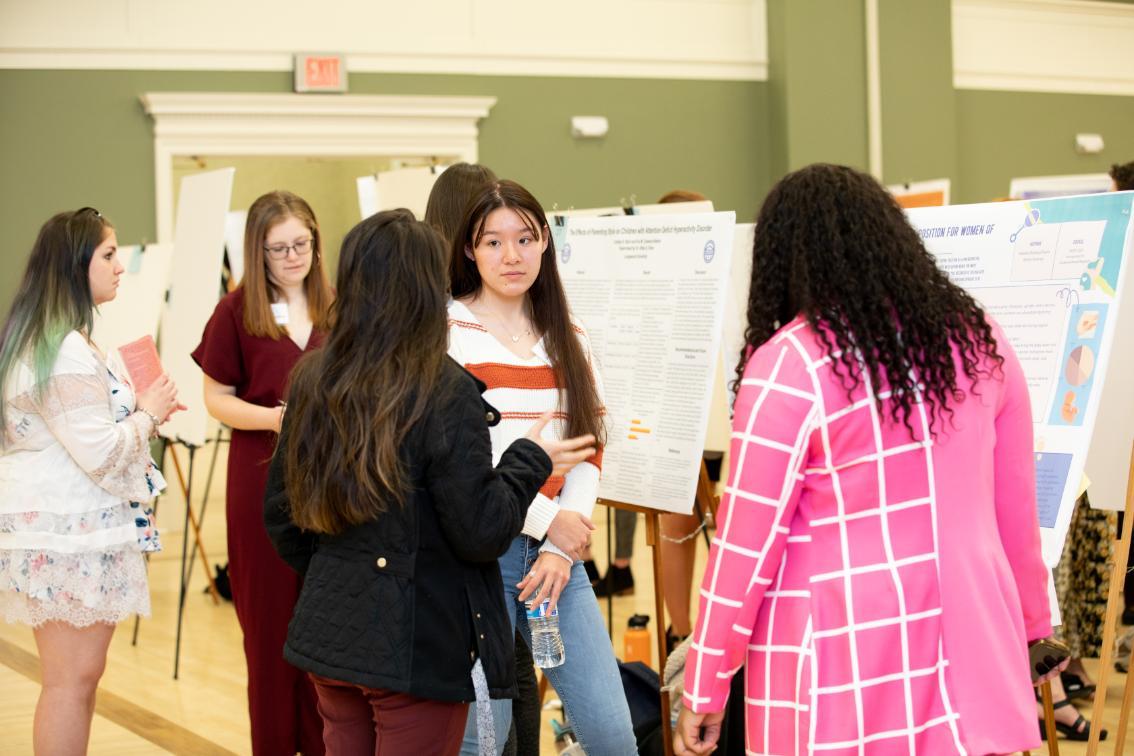 4. Upright positions have many benefits during childbirth compared to other birth positions.

Nursing students Isabella Kohama-Flores '23 and Anaya Jennings '23 used their research to explore the different types of positions for childbirth and their benefits. They found that upright positions have many benefits compared to other birth positions. Upright birth positions can improve maternal and neonatal outcomes as well as maintain maternal comfort during labor.

“What is the Best Birthing Position for Women of Childbearing Age?”
NURS 360: Introduction to Evidence-Based Research (Professor JoAnn Davis)

5. Bipolar Disorder is one of the most heritable mental conditions.

6. Of the 640 crayfish species worldwide, 70 percent are found in the United States.

Crayfish are considered a keystone species, which means their presence greatly benefits the health and stability of the ecosystem they inhabit, and they are a water quality indicator. Crayfish are also understudied in Virginia. Randolph Zerick’s '23 year-long research project focuses on the Chowanoke Crayfish, which is a candidate for the U.S. Endangered Species list. Zerick’s research will continue through PRISM this summer.

Ross Bechtle '22 decided to study 1,000 of the more than 75,000 plant specimens in the Harvill-Stevens Herbarium at Longwood to determine their geographic origins. He found that most specimens came from the central and western parts of Virginia, not the tidewater region. The majority of the specimens were collected between the years 1974 and 1984.

8. Most women returned to domestic roles after World War I, with the exception being clerical positions.

Women entering the workforce was a major societal shift across Europe and the United States during World War I. Through her research Gillian Detrick '23 found that opposition to women working came mainly from male dominated labor unions, which feared the consequences it would have on male employment. Feminist organizations were split on the issue. Ultimately women’s role in the workforce during World War I led to female suffrage in the United States, Great Britain and Germany shortly after the war.

“Reactions to Working Women in World War I”
HIS 415: Gender and Sexuality during the World Wars (Dr. Melissa Kravetz) 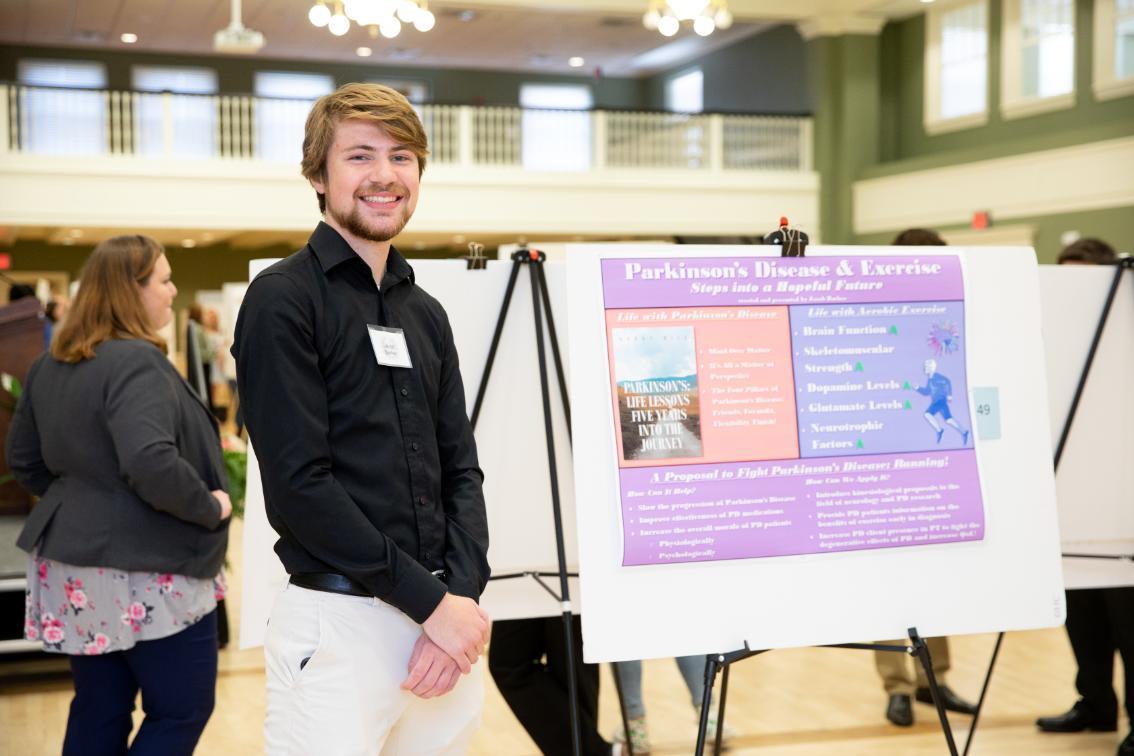 9. Aerobic exercise can slow the progression of Parkinson’s disease and improve the overall morale of patients.

Through his research Jacob Barker '23 found that aerobic exercise for patients with Parkinson’s disease provides several positive outcomes, including better brain function, higher dopamine and glutamate levels and improved skeletomuscular strength. His proposal is to increase Physical Therapy for Parkinson’s disease patients in order to help fight the degenerative effects of the disease and increase quality of life.

10. The effects of concrete riverbanks that are used to prevent erosion primarily under bridges or around residential areas is not well-known.

In their research Nadia Mullins '23, Mary Spangler and Jerry Dunford '23 hypothesized that concrete riverbanks would inhibit sediment transport and cause sediment starvation downstream. To test this they took samples of sediment upstream, under, and downstream from the Main Street Bridge across the Appomattox River in Farmville. They found that the sediment particles downstream had a greater accumulation of smaller particles than at the artificial riverbed or upstream locations. This suggests that the artificial bank did prevent erosion and sediment transport to some degree.