There has been much to celebrate in Farmville this year. Properly punctuating such a monumental year, which included hosting the Vice Presidential Debate and the first-ever Longwood Mega Reunion, is a difficult task. But if anyone could do it, it’s the Longwood softball team. The most successful and decorated of Longwood’s athletics programs in the Division I era, the hardball Lancers sent the residents of Farmville into a frenzy on May 14 when they won their historic third-straight Big South Softball Championship in front of a home crowd at Lancer Field.

But while the cameras were pointed at the dogpile on the field after freshman first baseman Kasey Carr ’20, from Bedford, gloved the final out in Longwood’s 4-2 championship game win over rival Liberty, the celebration extended well outside the foul lines. More than 2,000 fans traveled to Lancer Field for the five-day tournament, including more than 600 spectators who filled the bleachers and lined the outfield grass on championship Sunday.

“You can’t describe it,” said senior ace Elizabeth McCarthy ’17, a kinesiology major from Dunnsville, who was named Big South Tournament MVP. “We already have a good fan base and our parents follow us everywhere, but to have President Reveley, the athletics staff, students who are here for senior week and all the people from Farmville in the stands—it was unreal.”

Longwood softball has long been beloved by the citizens of Farmville and the Longwood community, and the capacity crowds that packed the stadium every time the Lancers took the field during the tournament were evidence of that.

"Longwood did an outstanding job hosting the Big South Conference Softball Championship—one of the best in memory."

The plethora of signs, street decals and swag that flooded local businesses on Main Street and around Farmville in the run-up to tournament week also testified to local support for the team, as did the $30,000 gift to the softball program from Farmville businessman Gene Watson. A longtime friend of head coach Kathy Riley, his contribution purchased Lancer Field’s new outfield padding, which went on display on the first day of the tournament. And the benefits of the tournament went beyond Farmville.

Longwood’s final two games of the tournament appeared on ESPN3 in what would be a lengthy run of national exposure for the team. Longwood outfielder Jessica Smith ’19, a kinesiology major from Chesapeake, garnered national attention on ESPN SportsCenter as the program’s No. 7 “Top 10 Play” for her wall-busting catch in the quarterfinal matchup against Radford on May 10.

Sunday night, after the championship win, the Lancers once again saw their team name on the big screen when they were announced as one of four participants in the NCAA Knoxville Regional during the NCAA Softball Selection Show, which aired on ESPN2.

That NCAA Regional berth—which, according to Riley, would not have been possible without the hometown support that propelled the Lancers to the Big South Championship win—also netted Longwood another appearance on ESPN2 when the softball team squared off against SEC powerhouse Tennessee, occupying two hours of airtime on one of ESPN’s nationally renowned flagship stations.

LongwoodLancers.com, Longwood’s official athletics website, experienced extremely heavy traffic during the postseason run. Nearly 10,000 users flocked to the site during the Big South Conference Tournament for one of the most visited five-day spans of the record-breaking 2016-17 year. The softball-generated momentum continued the following weekend when LongwoodLancers.com broke the record for most visitors in a single day. On May 21, more than 5,000 people logged on after the Lancers advanced to the NCAA Regional final against No. 8 seed Tennessee. 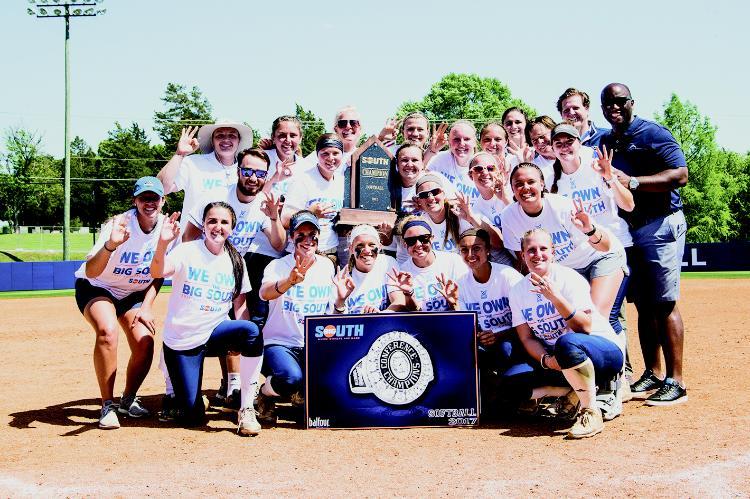 More than 600 hometown fans were on hand to watch Longwood win the Big South Softball Championship on May 14. (inset) The Longwood softball team celebrates after winning its third-straight title and fourth in the past five years.

The boom from the tournament was financial as well. Six teams from around the region— Campbell (Buies Creek, North Carolina), Charleston Southern (Charleston, South Carolina), Liberty (Lynchburg), Radford (Radford) and Winthrop (Rock Hill, South Carolina)—all brought their fans to town, which produced nearly $15,000 in tournament ticket revenue. Post-tournament impact studies estimate that the six participating teams and their fans spent more than $50,000 on food, hotels and entertainment in Farmville and the surrounding region.

Months of planning went into ensuring that all of the impact was positive, and the effort paid off. The tournament itself went off without a hitch, drawing praise from coaches, players and fans alike, and even from Big South Commissioner Kyle Kallander.

“Longwood did an outstanding job hosting the Big South Conference Softball Championship— one of the best in memory,” said Kallander, now entering his 22nd year as Big South commissioner. “The crowds were outstanding, the operation very professional, and the amenities superior—and that was with serious weather conditions to contend with,” he said, referring to rainstorms that delayed the tournament by a full day.

“One would never know that this was the first Big South Championship that Longwood has hosted. We’d come back in a minute.”