Hundreds of student volunteers prep for an unforgettable week

Longwood students are famous for their civic-mindedness—each year Lancers put in tens of thousands of volunteer hours in the local community. When the call went out for volunteers to help make the 2016 Vice Presidential Debate a success, Longwood students responded in a big way, and more than 1,000 volunteers will spend the historic week as debate hall ushers, network media runners, on social media teams and many other roles.

Taking volunteering to the next level, Longwood implemented the unprecedented step of matching as many students as possible who volunteer with their course of study or career interest. Participating in the 2016 Vice Presidential Debate won’t be just a great story to tell over winter break—it will be an impressive line on hundreds of students’ resumes that comes with valuable experience for burgeoning careers.

Here are some of their voices.

"I think that it is remarkable how, no matter their political affiliation or beliefs, so many people on campus are volunteering and willing to help with this debate. Many organizations on campus are pushing for Longwood students to become educated on the candidates and to register to vote, and, because I’m a political science major, that is what I am all about! I didn’t know what role I’d have when I signed up to volunteer, but to be an usher inside the actual debate hall will be an unforgettable experience that I’ll cherish forever."

"Politics is extremely important in all of our lives, and I was excited when I learned that Longwood had won its bid for a general election debate--so much so that I immediately began thinking about how to get involved. As a political science student, I often stress the importance of involvement and as a student leader I want to set an example that volunteering for the debate represents Longwood’s student body in the best possible way.

The debate has established a political environment throughout campus, not just in political science classes. Students and community members are actively engaging in such an important part of being a citizen. It’s an honor for Longwood to be put in the national spotlight as host of such a prestigious event, and an honor for me to be a part of it."

"This is important not just for Longwood and its students but also the Farmville community. As a Peer Mentor at this summer’s freshman orientation, we told everyone that the bond between Longwood and the community is second to none, and I believe the debate is only going to make that stronger. Volunteering is an important part of that, and I’m proud to represent my school this way."

"I breathe white and blue, and couldn’t be more excited for this historic moment. As cliched as it may sound, it feels like yesterday when we learned the news that we’d host the debate, and now we’re in the final countdown and my excitement has only grown. History will be made again here as the debate takes place and I’m truly humbled to stand witness to such an incredible milestone."

"Not only is hosting this debate a great educational experience for the student body, it’s also a great chance to show off the campus to the rest of the country and the international press. I think it’s important to show off the Longwood so that people see the quality of the educational services offered here. It’s also important that students pay attention to this because, for many of us, this is our first chance to vote in a presidential election. They aren’t likely to get as good a first seat as this anytime soon."

"People always talk about the camaraderie at Longwood, and like thousands before me, I found it to be true as soon as I arrived for move-in day my freshman year. Since then, I have tried to find ways to display and emphasize how special this university can be for others as well. That’s exactly why I decided to volunteer for the debate and am among the many students anxiously awaiting this exciting event!" 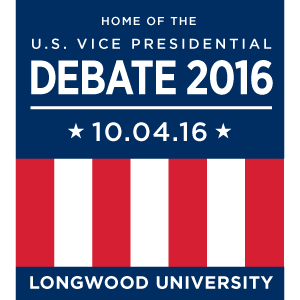