A vibrant new neighborhood will soon be taking shape in Farmville, thanks to a creative partnership between Longwood, an award-winning housing non-profit and local leaders and community organizations.

The development is planned for the current site of Longwood Village, former Longwood student housing located behind Sheetz on South Main Street in Farmville. Known for now as the South Main Street Community, the project envisions 300 rental units, including affordable housing for the region’s growing labor force, and later expanding to include senior living options and single-family homes and townhouses, along with mixed-use community amenities.

The project represents an eventual $80 million investment by funders into the site, meeting an urgent and growing need in a community that has long had ample student housing – but lacked quality housing for healthcare workers, new teachers and other working families on which the greater Farmville area relies.

The Better Housing Coalition has been thoroughly vetted. What they have done in Richmond is nothing short of miraculous. For them to extend out to Farmville is incredible. It’s a great partnership. It’s a great thing for Farmville. 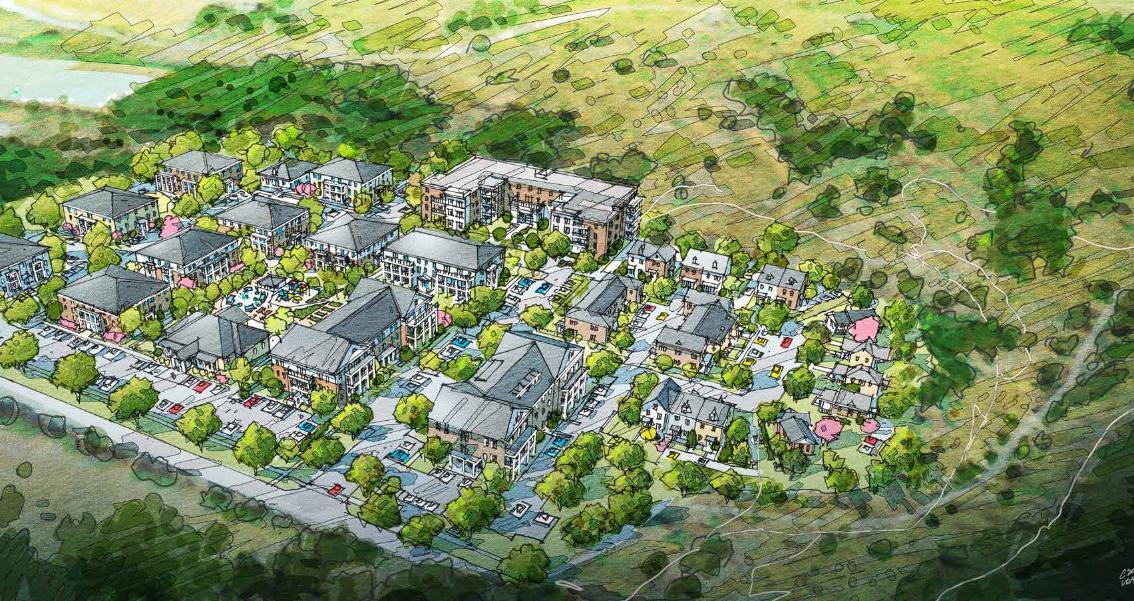 Among those partnering are STEPS, the local nonprofit for community housing, education, and workforce development, and the award-winning Richmond-based non-profit the Better Housing Coalition. BHC has a well-known track record developing high-quality and well-managed housing that reinvigorates neighborhoods and is affordable to working families – a longstanding need identified by Farmville Mayor David Whitus ’83, who has been a champion of the project.

“STEPS put a lot of efforts into choosing the right partner,” Whitus said. “The Better Housing Coalition has been thoroughly vetted. What they have done in Richmond is nothing short of miraculous. For them to extend out to Farmville is incredible. It’s a great partnership. It’s a great thing for Farmville.”

“The stars aligned that Longwood had this facility and was willing to partner,” he said. “It’s a perfect marriage for this.”

Several community meetings this summer confirmed the need that a regional housing assessment indicated several years ago, and produced input and suggestions that project architects incorporated on-the-spot into evolving conceptual drawings. The project is advancing as Longwood helps as a facilitator and prepares to sell the property to the Better Housing Coalition in 2023.

We certainly could have tried to sell this property to the highest bidder, but from the beginning, we wanted to work with community partners to determine how it could fit into a larger picture of meeting real need in the region.

“We certainly could have tried to sell this property to the highest bidder, but from the beginning, we wanted to work with community partners to determine how it could fit into a larger picture of meeting real need in the region,” said Louise Waller, Longwood’s vice president for administration and finance. “The property no longer fits in with our Master Plan, which puts an emphasis on students living on a central campus in downtown Farmville. But it fits in very well with the housing needs assessment that the coalition commissioned. It is a natural and worthwhile evolution of the property.”

The current Longwood Village building will be transformed into one, two, and three-bedroom rental units. A standalone unit for seniors is planned, as are 40-50 townhomes and a community center, childcare center, and outdoor gathering spaces—a true mixed-income, mixed-use community development.

The project will help with an urgent priority for the region: housing community members who make up the local labor force -- from early childhood educators to nursing assistants to first responders to retail workers and restaurant staff.

It was a unique opportunity that excited us, and that was only bolstered by the enthusiasm we felt from Farmville at the idea.

Greta Harris, director of the Better Housing Coalition Tweet This

“In my history, no one has brought us a site like this,” said Greta Harris, director of the Better Housing Coalition, the Richmond area’s largest not-for-profit community development coalition, which has helped revitalize and develop new neighborhoods throughout the region. “Even though it was stretching us from locations where we typically operate, it was a unique opportunity that excited us, and that was only bolstered by the enthusiasm we felt from Farmville at the idea. It’s very rare when you have anchor institutions, businesses, government, and nonprofit partners all singing from the same page.

“Our mission is to help modest income households live their best lives,” Harris said. “That means living in a safe clean environment where they are not spending the majority of their income in rent. We also work to provide services that help them to build skills and address challenges so they can thrive, which benefits the entire region.”

The housing need was outlined in a 2019 housing study commissioned by the Prince Edward/Farmville Housing Coalition, a group of businesses and nonprofits invested in housing solutions.

The results of that study were stark. “There are housing needs at all income levels,” said Sharon Harrup ’82, President and CEO of STEPS. “From a significant homelessness issue all the way up to families with sufficient income to live comfortably who are priced out of the real estate market and need to rent, the study reflected what many families feel on a day-to-day basis—limited housing options in their price range.”

That study stemmed from a roundtable five years ago convened by Mayor Whitus with community partners to discuss housing needs at all income levels in the area. At the table: Farmville and Prince Edward County nonprofits, business leaders, K-12 administrators, college and university leadership, and elected officials. All agreed to press forward with a housing needs assessment that would lay bare the issue in the region.

“What we saw in the study was confirmed by the community meetings we held in July,” said Harris. “There is job growth in the region that is not supported by housing that is priced at an affordable level. Much of that growth is in anchor institutions—Longwood and Centra Southside Hospital—but also in retail businesses and education workers. There was also some indication of a need for affordable housing for seniors, especially with services provided, and also more opportunity for home ownership in the area. So there’s a broad base of need, and both an inventory and affordability issue.”

Recently, it has become even clearer that in a tight labor market, communities with affordable and attractive housing options have an advantage in recruiting essential workers, helping neighborhoods thrive and grow, helping new and established industries recruit and retain the workers they need at a time when many smaller towns and communities are struggling to maintain population grow the tax base.

“We need a strong housing base to support all of the other efforts we all want to see that are part of a thriving community,” Whitus said. “You have to have people, and so you have to have housing. It has a domino effect of supporting other things the community needs.”