Julie Mock Blake ’99 doesn’t think she’ll ever get too old for summer camp—at least not the camp where she’s been volunteering since she was 12.

Camp PARC is a residential summer camp in Southwestern Pennsylvania especially for children and adults with intellectual and developmental challenges. It’s been run by Blake’s cousins Ted and Judy Risch since 1980.

“It’s a big part of my life, and over the years I’ve benefited as much or more than the campers,” said Blake, who spends the school year teaching first grade in Gloucester. She lives on a working farm with her husband, Todd Blake ’99, and their two young daughters, Katherine and Claire. The whole family now volunteers at the camp each summer.

“Going to camp resets your humanity button every year,” said Julie Blake. “It helps us to understand profoundly how fortunate we are. We fuss about what are actually gifts: ‘Oh darn, I have to go work today or do the grocery shopping.’ Then you meet people who wish they could but can’t.

“It’s not unusual to become attached to campers, especially those who come year after year,” she added. “They’ve aged with me, but differently.”

Camp PARC was founded in 1960 by the parents of an intellectually challenged boy. At that time, children and adults like their son were routinely institutionalized, but the camp founders believed that people with Down syndrome, autism and other intellectual disabilities should be able to go to summer camp, too.

Blake, who earned a degree in elementary education from Longwood and a master’s in special education from the University of Virginia, first volunteered as a staff babysitter, then as a counselor and later as a senior staff member helping to plan and run activities.

During three sessions throughout July, campers of varying degrees of ability take up residence in cabins close to a natural lake surrounded by rolling, green hills. “They experience structured days filled with swimming and hiking, and activities geared toward what they can do,” Blake said. “The campers’ enjoyment is the focus. Because so many campers don’t have super active lifestyles at home, there’s not a lot of down time. We keep them busy.”

'It’s a big part of my life, and over the years I’ve benefited as much or more than the campers.’

“The final week of camp culminates with a costumed and themed stage show open to friends and visitors. It’s very exciting for everyone involved.”

Blake foresees many more Julys volunteering at Camp PARC. “My goal is to keep learning, absorbing and enjoying. And eventually see my children become a part of the leadership.” 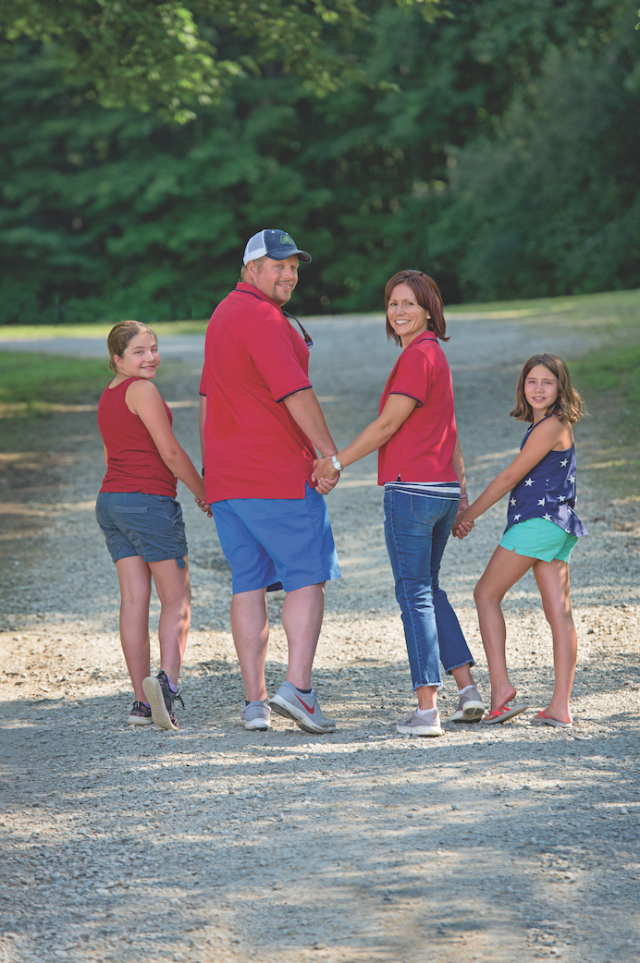 The entire Blake family, including daughters, Katherine (left) and Claire (right), and their dad, Todd Blake ’99, volunteer each summer at Camp PARC (Photo by Chris Hay).