In the Alumni Association’s annual awards program this year, Longwood is honoring five alumni and a longtime friend of the university for their outstanding achievements and service to others.

Among the honorees are a software developer who worked on the Tomahawk cruise missile; a medical anthropologist whose responsibilities with the World Health Organization and the United Nations took her around the globe; and an alumna who, in a variety of roles including rector of the Board of Visitors, has given countless hours of service to her alma mater in the six decades since her graduation.

Begun in 1970, the awards program has singled out those whose accomplishments are deserving of recognition. All of this year’s recipients embody the spirit and purpose of citizen leadership and, through their actions and the examples they set, serve as ambassadors for Longwood and the education it provides. 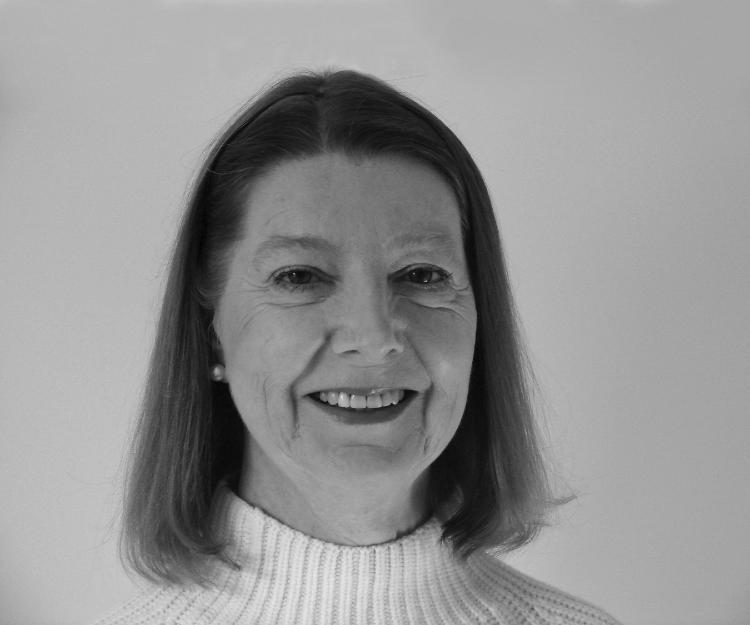 Shirley Grant attended Longwood at a time when it was all-female and known for producing teachers. Grant, who majored in math, decided on a road less traveled. Instead of taking her skills into the classroom, she put them to work for the Department of Defense.

During the majority of her 40-year career, she was involved in the development of computer software for the Tomahawk cruise missile program. Working at the Navy’s Dahlgren research and development facility near Fredericksburg, Grant focused mainly on the weapon control software required to prepare, launch and monitor the missile before and after firing from U.S. surface ships and, subsequently, from the United Kingdom’s Royal Navy submarines. The Tomahawk became operational in 1983—two years after she began working on the system—and was first deployed in combat during Operation Desert Storm in 1991.

Grant, who retired in 2014, spent the final 20 years of her career managing the design modifications needed to enable the UK to make the system work aboard that country’s submarines and, equally important, crew training to allow the missile’s safe firing by a foreign country. Her responsibilities, which began when the UK considered buying the missile system in 1994, included establishing whether the U.S. system could be modified to work with preexisting systems in the UK. She traveled more than 20 times to England and Scotland, leading the team that tested the system once it was installed.

“My job was always interesting, always challenging,” said Grant, who received the Navy Meritorious Civilian Service Award in 1985 and 1998. “I always had to learn something new.”

Grant began her Dahlgren career in November 1973, working initially as a computer programmer. Before switching to the Tomahawk project, she worked on the Poseidon and Trident weapons systems, both of which are submarine-launched missiles.

She met her husband, David, a native of Scotland, when he worked for the UK’s Ministry of Defense. The couple lives in Fredericksburg. 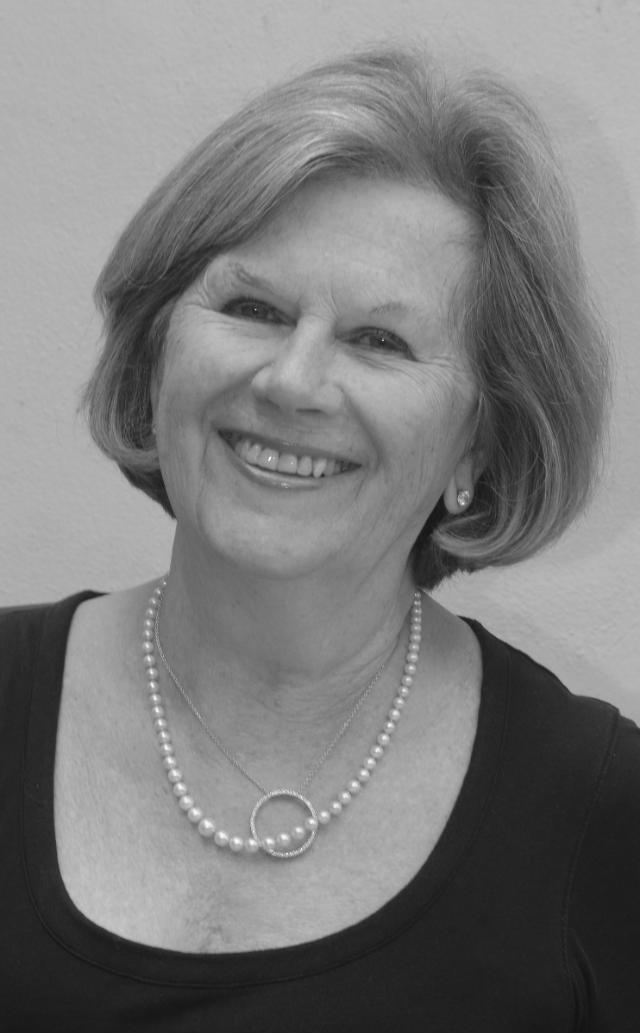 Cheryl Andrews helped put herself through Longwood by writing advertising copy for the former Thalhimers department store in Richmond. Now she runs the largest travel and hospitality public relations company in south Florida, spending about 30 to 40 percent of her time traveling.

Andrews is president and CEO of Cheryl Andrews Marketing Communications, founded in 1987 and based in the Miami suburb of Coral Gables. The company has grown from a one-woman operation to include 18 employees, and its current clients include the tourist boards of Costa Rica, Grenada, Trinidad and Tobago, and Montserrat, as well as several high-profile resorts and boutique hotels.

“Our motto is, ‘We’re here to make good things happen for other people,’” said Andrews. “I love what I do, and I don’t plan to retire any time soon.”

Andrews was named one of the “Top 25 Most Extraordinary Minds in Sales and Marketing” by the Hospitality Sales and Marketing Association International in 2006. “Still, the only awards we really care about are those we win for our clients, which means adding to their bottom line,” she said.

After the English and journalism major graduated from Longwood, she traveled and lived in several places, including Washington, D.C., where, working with the National Organization for Women, she wrote congressional testimony to get Title IX passed. She moved to Miami in 1977 and started writing marketing materials for resorts, in addition to teaching. Eventually she branched out when one of her clients, the now-defunct Key Biscayne Hotel and Villas, was so pleased with her advertising work that they asked her to also handle their public relations and marketing.

In addition to her home in Miami, Andrews has owned a home on Nevis, part of the Caribbean Federation of Saint Kitts and Nevis, since 2001. “I call it 3.5 Seasons—it’s almost, but not quite, the Four Seasons,” she said. 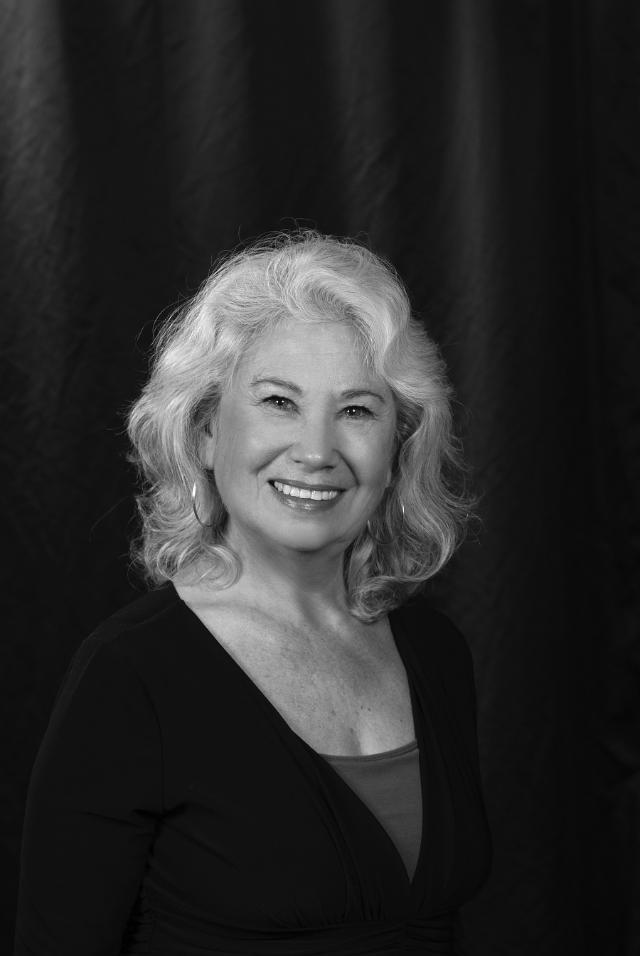 Dr. Mayling Simpson had planned to be a high-school biology teacher until she experienced a “great epiphany” during a trip to Europe in the summer of 1967 that changed her outlook on life.

“I realized from a young age that I live in a privileged country and had a privileged upbringing,” she said. “Once I started traveling, I realized I could have been born under different circumstances—I could be that person in the slum in the Philippines or living in rural poverty in the Ethiopian countryside. I was given a great education, and I was not going to spend it on myself but on others.”

She decided to become a medical anthropologist, merging her interests in biology, medicine and health. Armed with her Longwood degree as well as a master’s and Ph.D. from the University of North Carolina, she directed her efforts toward improving water and sanitation systems in communities around the globe.

During her 40-year career, she lived full-time in eight countries, primarily in Africa, Asia and Eastern Europe, and worked for some of the most respected agencies in the field: senior technical officer for the World Health Organization in Geneva, Switzerland; senior health advisor for Catholic Relief Services in East Africa; and consultant for the United Nations Development Programme.

The work was about meeting what Simpson calls “the most basic needs that we now take for granted: clean water and sanitation, infant feeding practices and education on how to pre- vent diarrhea, malaria and HIV/AIDS.”

Simpson, who lives in Steamboat Springs, Colorado, has been a part-time consultant since retiring six years ago. She misses traveling and living abroad.

“It’s stimulating to learn about other cultures. I’m addicted to it,” she said. “And I love the challenge of a public health or social justice problem.” 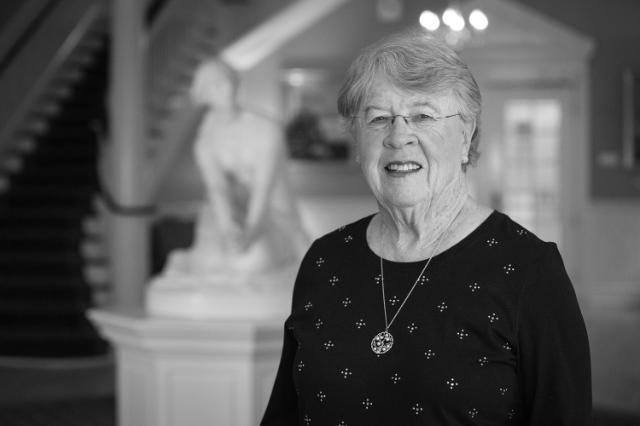 Nearly 65 years after entering Longwood, Dr. Helen Warriner-Burke is as devoted as ever to her beloved alma mater.

She currently chairs the Longwood Center for the Visual Arts board and also serves on the Real Estate Foundation board. She was on the Board of Visitors from 2002-10, serving as rector in her last year, and also is a former member of the Alumni and Foundation boards and the Hull Springs Farm strategic planning task force.

“I have been progressively impressed with the university’s quality and professionalism,” said Warriner-Burke, retired supervisor of foreign languages for the Virginia Department of Education.

Family members share a connection to her alma mater. Her husband, Pat Burke, taught history at Longwood from 1968-79. Their son, Brendan, is a 2003 Longwood alumnus, and Warriner-Burke’s sister, Lee Scott ’62, followed her to Longwood, where she met her husband, Dr. Marvin Scott, professor emeritus of biology, who chaired the natural sciences department for many years.

Warriner-Burke, who has a master’s degree from the Universidad Nacional Autónoma de México (National Autonomous University of Mexico) and a Ph.D. from the Ohio State University, started her career as a high-school Spanish teacher in Richmond and Newport News. She also taught at the college level, as an adjunct, in addition to her nearly 30-year career with the Virginia Department of Education. She was one of 24 Virginians, including author Tom Wolfe, who in 1977 received the first Cultural Laureate Awards from the Virginia Cultural Laureate Center.

She and Pat have lived since 1994 in the Amelia County house where she was born, marking the third generation of her family to begin their lives there. The land has been in her family since 1855. 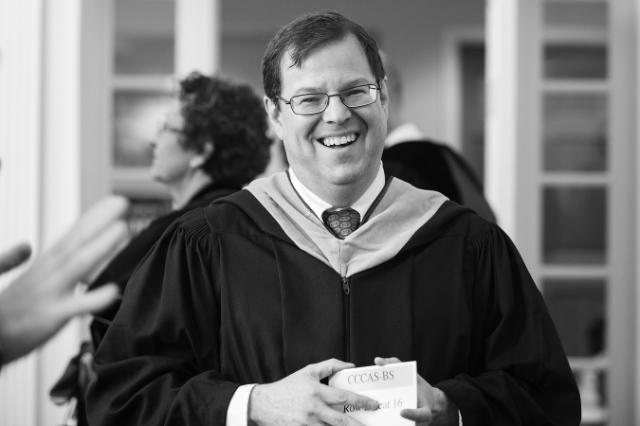 Larry Robertson had planned to be a high-school history teacher until his junior year at Longwood, when he realized the classroom wasn’t for him.

“I liked being an RA in Curry, and some of the student affairs people, including Phyllis Mable, MaryKaye Benton Cochran, Joe McGill and Dr. Sue Saunders, suggested that I look into higher education student affairs,” he said.

After picking up a master’s degree from James Madison University, working as a residence education coordinator in Curry for three years and spending nine years in residence life at Virginia Tech, Robertson returned to Longwood in 2004 as director of residential and commuter life. He became dean of students in 2012.

“Twenty-five years of students have made this job worthwhile. Working with students keeps me young, keeps me motivated,” he said. “Now I have former students who bring their kids here as students, which is fun and exciting.”

Robertson is touched to receive an award named for longtime friend Nancy Shelton ’68. As a Longwood student, he was a member of Geist [now Mortar Board], for which Shelton, retired associate vice president for alumni relations, was the adviser.

“To even have my name uttered in the same breath as Nancy is a sincere honor,” he said, adding that Shelton, who always put students first, was a role model for him.

Robertson himself is the namesake of another award. Upon leaving Virginia Tech, his former supervisors established the Larry Robertson Emerging Professional Award, given annually to a graduate student or staff member who “best exemplifies professionalism, excellence and dedication to the student affairs profession.” 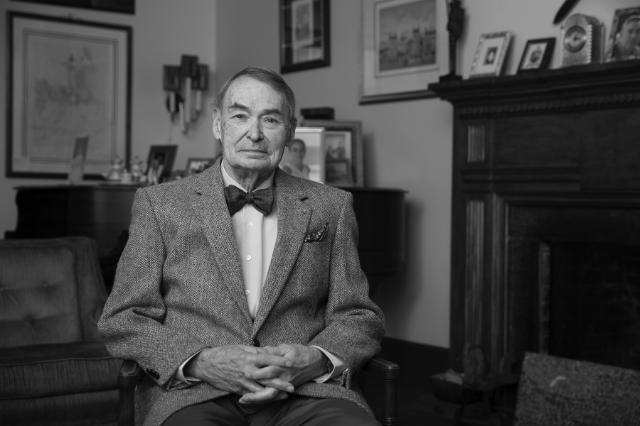 When Dr. Anthony “Tony” Muñoz arrived in Farmville in 1961, he planned to stay less than a year. More than a half-century later, he is still there—thanks to Longwood.

“I have had a lot of love for, and ties to, Longwood since the day I came to town,” said the retired thoracic surgeon, a native of Valencia, Spain, who has lived in the United States since 1954. “I intended to stay here only about nine months, but nine months became 55 years. Longwood and Hampden-Sydney College are the reasons I’m still here.”

One of those Longwood ties is his late wife, Mary Ellen Lane Muñoz ’83, M.S. ’88. Mrs. Muñoz participated in the first Longwood Archaeology Field School, in 1980, and was in the first class of students to graduate with an anthropology degree.

Three of the couple’s four children also are alums: Mark ’79, Sara ’83 and Laura ’91, who, like her mother, participated in the first Archaeology Field School.

Muñoz served on the Longwood Foundation Board from 1974-1993 and was awarded director emeritus status upon step- ping down. One additional Longwood connection is the late Marie Eason Reveley ’40, grandmother of Longwood President W. Taylor Reveley IV, who was one of Muñoz’s patients.

In addition to his private practice, Muñoz was the first medical director of the Heart of Virginia Free Clinic, serving in that position for three years. In his early days in Farmville, he demonstrated a commitment to social justice when two members of the medical staff from Southside Community Hospital visited him at home.

“They suggested I should have separate waiting rooms [for whites and African-Americans], but I told them, ‘No way am I going to do that. You wanted me here, so it will have to be on my terms. Otherwise, I will leave.”