Senior Toast and Alumni Weekend give alumni from the Class of 2019 to the 1940s a chance to reconnect, reminisce and paint the campus red

IT’S A BEAUTIFUL DAY on campus—the kind of sunny, low-humidity weather so familiar to Californians and so rare in central Virginia. Between Lankford and Stubbs, faces are being painted, caricatures drawn and volleyball played while chart-toppers from the last 50 years blast from the sound system.

When “Ain’t No Mountain High Enough” comes on, it’s just too much for one guy sporting a neatly trimmed gray beard and a white baseball cap. He starts singing and then dancing down the sidewalk with such pure happiness that it’s hard for the people around him not to smile—so they do.

You didn’t have to look far to find happiness— and a range of other emotions—on the Longwood campus during two particular weekends in May and early June. On May 10, Longwood’s newest graduates, the Class of 2019, gathered for the first Senior Toast, and alumni from across the decades headed to town for Alumni Weekend May 31-June 2.

At Senior Toast, about 350 graduating seniors were on hand, as well as 60 alumni they had personally invited, who welcomed Longwood’s newest alumni into the fold.

Those who attended heard from Dustyn Hall ’18, who accepted a new position as director of young alumni and student giving at Longwood in July. Hall gave the seniors an authentic look at life after college, and communication studies professor Jeff Halliday and sociology professor Dr. Jake Milne ’99, reflected on graduation and how to make the most of future opportunities.

Then it was time for the official toast, great food and dancing for the rest of the evening. Three weekends later, 350 alums, along with almost as many family members and other guests, came to campus for Alumni Weekend.

“We lived in South Cunningham and had a big corner room, with five people in our suite,” said Arlene Davis Cundiff ’69, a new Gold Society member celebrating her 50th year as an alumna.

She and her classmate Mary Elizabeth Tolley were reminiscing about having to call Nightie Watch, as security was known then, when they got back to the residence hall after curfew; about going across the street to a place that served “the best hamburgers in the world”; and, when they really wanted excitement, heading to Leo’s, a local “joint” that served low-alcohol “3.2” beer.

“We had more fun than a barrel of monkeys,” said Cundiff. Debbie Chaney Holt ’87, Tuan Nguyen ’79, Cindy Russell Mason ’79 and Steve Wertz ’88 said they were looking forward to reconnecting with friends, but also to seeing what has changed—and what hasn’t—at Longwood and in Farmville.

“I like seeing Farmville,” said Mason. “A lot is still familiar, but a lot is new.”

“I like to see my male friends who have lost their hair,” said Nguyen, getting a laugh from the group.

Wertz said he was looking forward to meeting some of his new fraternity brothers, adding that the feeling alums share for Longwood and each other transcends time. “It doesn’t matter what [class] year you are,” he said. 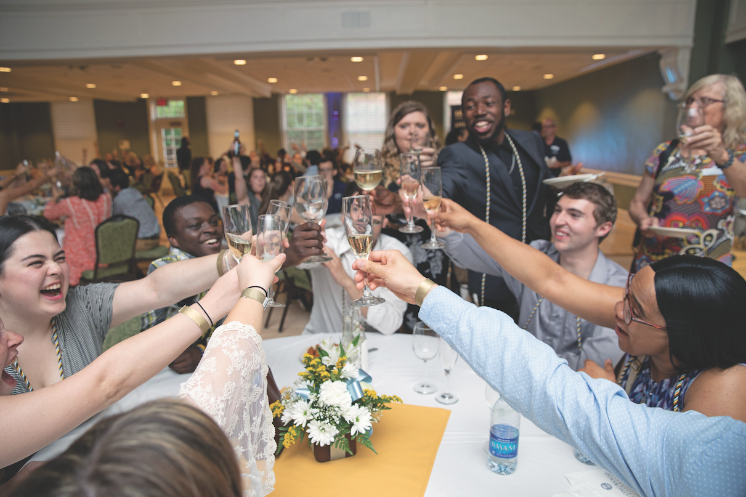 Seniors raise their glasses for the official toast of the evening in Blackwell Ballroom. 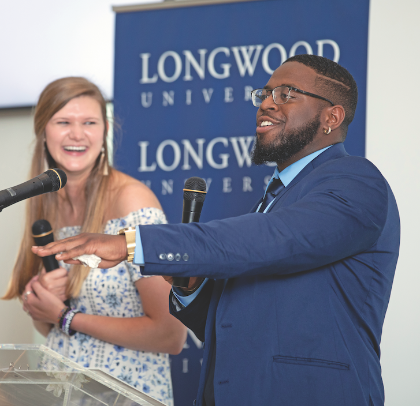 Sadie Hodges and Cecil Hayes were selected as the emcees for the presentation and dinner. 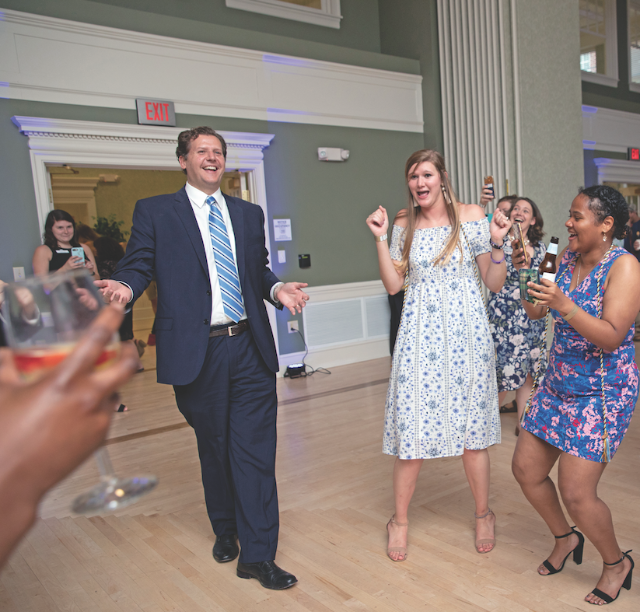 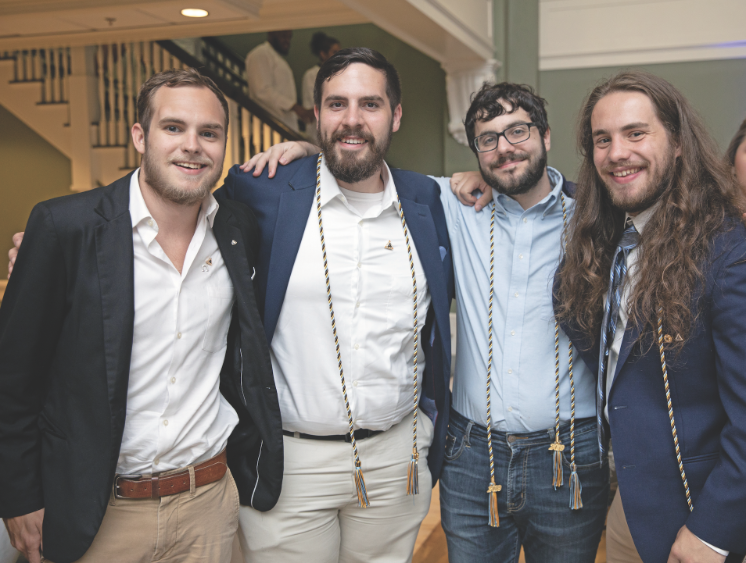 Those who attended Senior Toast received special cords to wear at Commencement, which was held the next weekend. Colors in the cords represent the three core values of the Longwood ‘brand’: brown for authenticity, blue for community and yellow for transformation. Modeling their new cords are Tyler Culbertson (left), Nick Wilson, Christian Reifsteck and Matthew Roos. 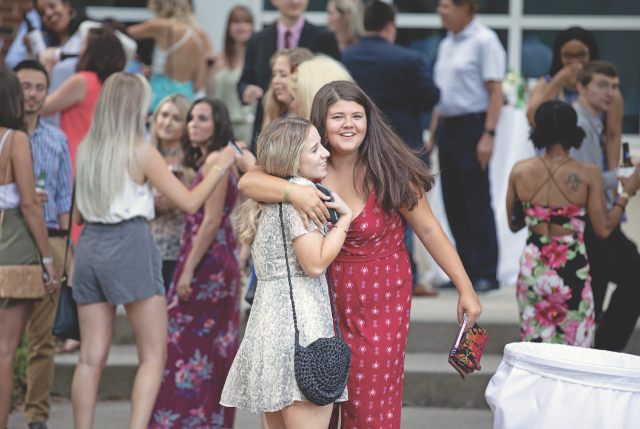 Friendships were in plain sight at the event. Here Meg Lowman (left) and Brett Johns congratulate each other on making it to graduation. 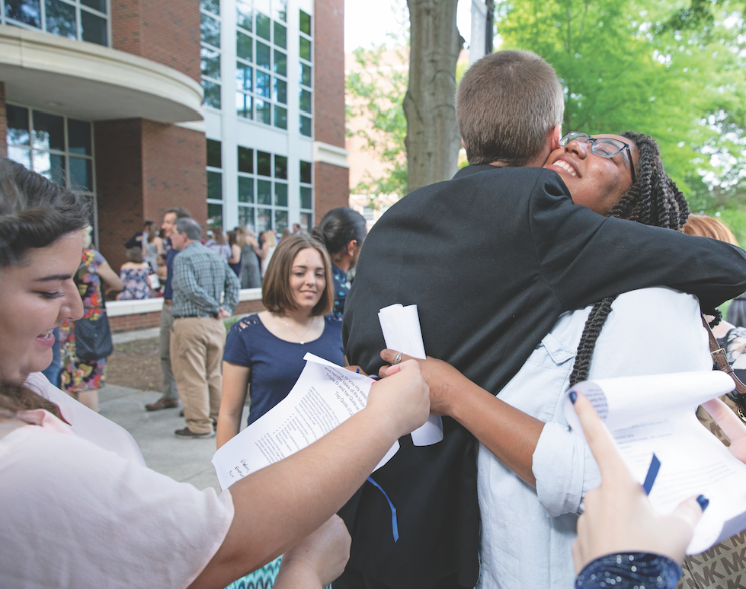 Anthropology classmates of Alex Fedorchak (who has his back to the camera) enjoy reading a memento he created for them poking lighthearted fun at one of their classes. Enjoying being back together outside the classroom are Sydney Cash (left), Taylor Evans and Jessica Moore, who’s on the receiving end of the hug. 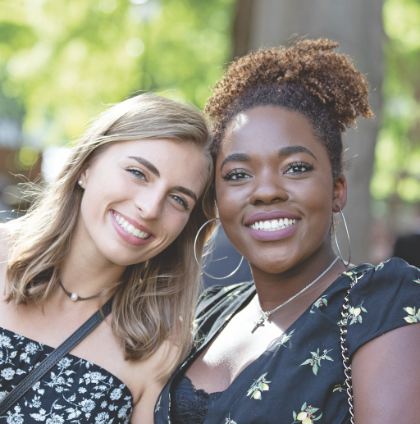 It’s a perfect evening for a photo op: Lindsay Hively (left) and Mallory Faustin pose for the camera.

THE WEEKEND IN PHOTOS 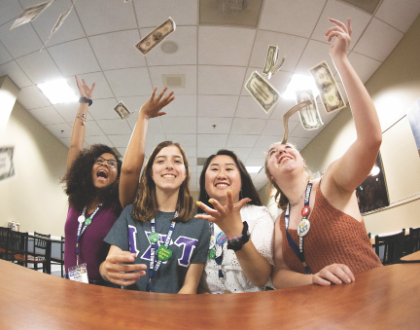 At Late Late Night Casino, alumni played blackjack and craps, then traded their ‘winnings’ for prizes. David Lydiard ’84 won the top prize, a Longwood class ring. Other prizes included a weekend at Hotel Weyanoke and season tickets for men’s and women’s basketball. Student volunteers were on hand to help out, including Sophia Manhertz ’20 (left), Manning Dean ’21, Liezl Villanueva ’20 and Gwendolyn Morris ’22. (Photo courtesy of Sam Chase ’21) 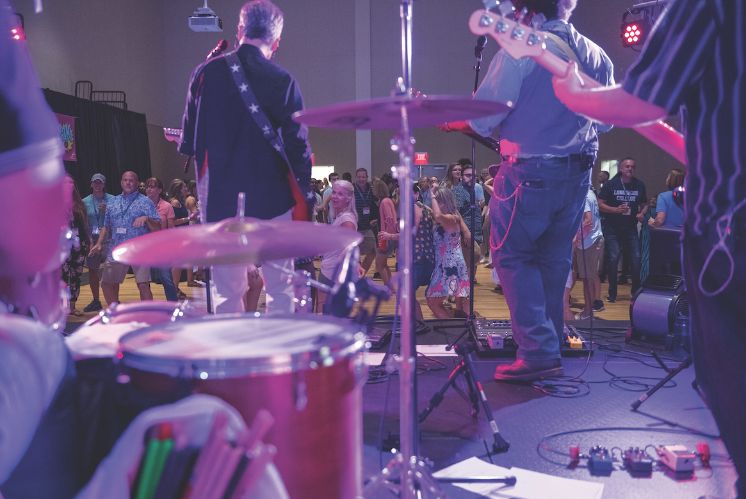 Live music and dancing were a big part of Alumni Weekend on both Friday and Saturday nights. Two different bands took the stage for the Decade Dinners, which were held in the Soza Ballroom in Longwood’s new Upchurch University Center. 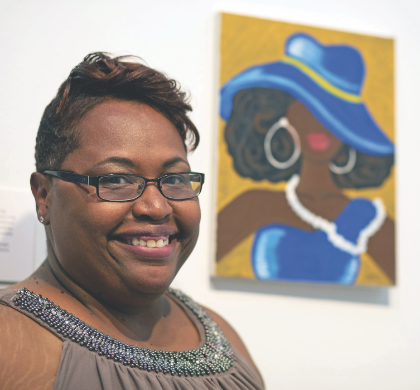 Grown Woman, 2016, acrylic on canvas, by Teresa Brown ’97 was one of 51 works selected from entries submitted for a special exhibition of alumni artwork at the Longwood Center for the Visual Arts. The exhibition opened during Alumni Weekend. (Photo courtesy of Sam Chase ’21) 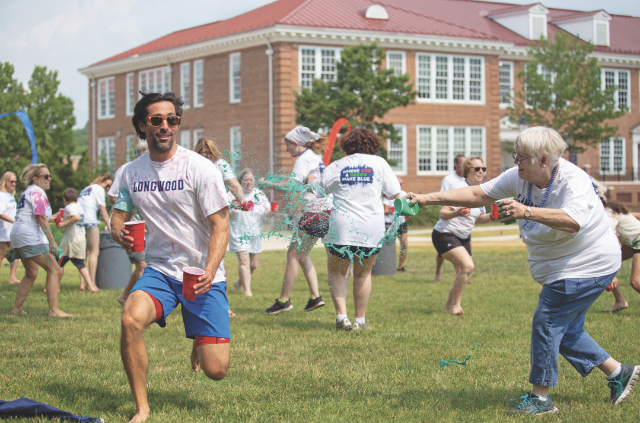 Jhonnatan Medina Alvarez, director of men’s and women’s tennis at Longwood, cannot escape the green paint that Penny Eberly Sherman ’71 has slung his way during Alumni Color Wars. Faculty and staff were invited to join the fun during the weekend. (Photo courtesy of Parker Michels-Boyce) 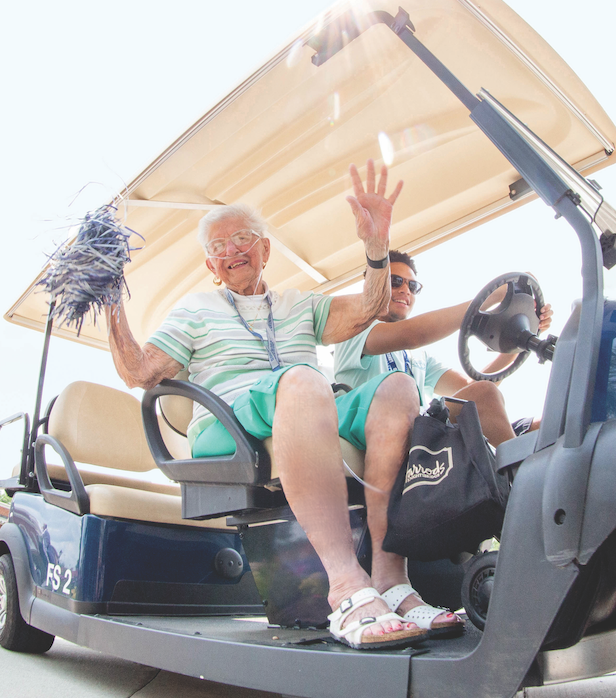 At 93 years young, Betty Romeo Wingfield ’49 had the distinction of being the oldest alum in attendance, rating her a private golf cart and the lead position in this year’s Class Parade. (Photo courtesy of Sam Chase ’21) 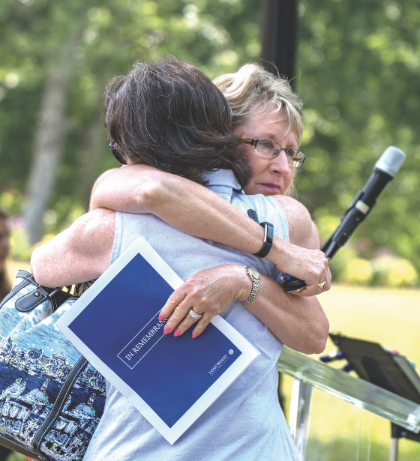 Outgoing Alumni Board President Tammy Bird Jones ’81 takes a few moments to remember and honor those alumni who have died since last year’s event. Trees are planted at the memorial service each year as a lasting reminder of all alums’ forever place in the Longwood family.

One of the most boisterous events of Alumni Weekend is the Class Parade, shown in the photos below. Shyness goes by the way and everyone cheers for their class, their decade and for what Longwood means to them. Older alums lead the way in golf carts, followed by banners proclaiming decades and individual class years. 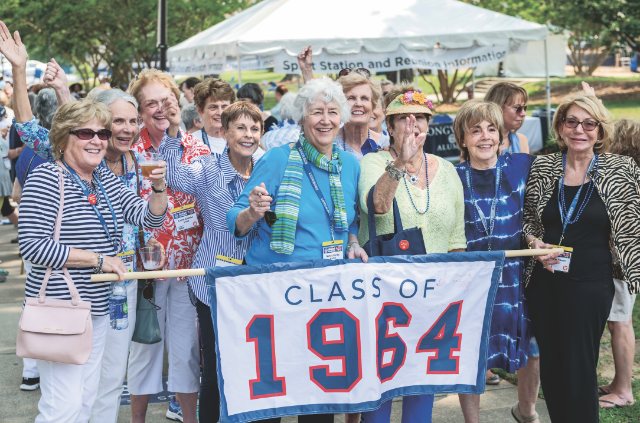 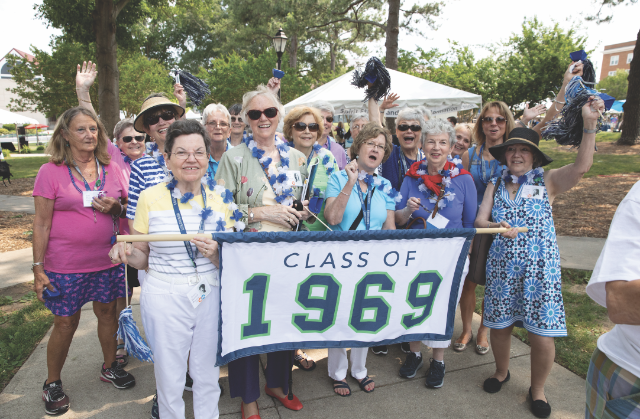 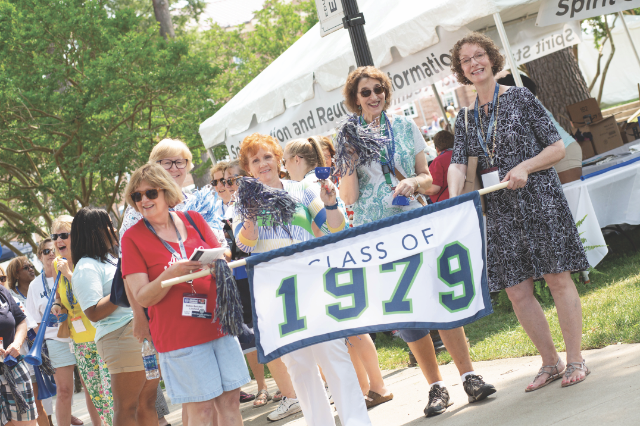 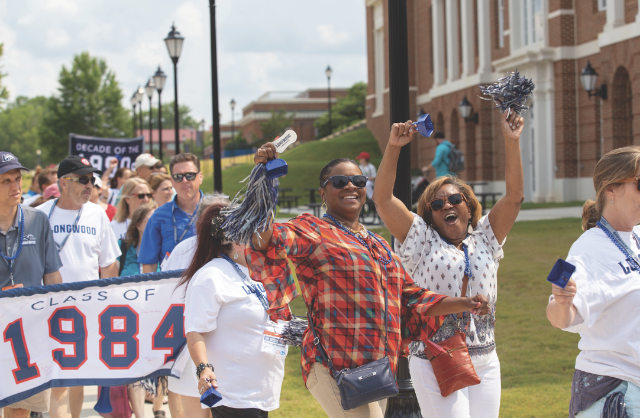 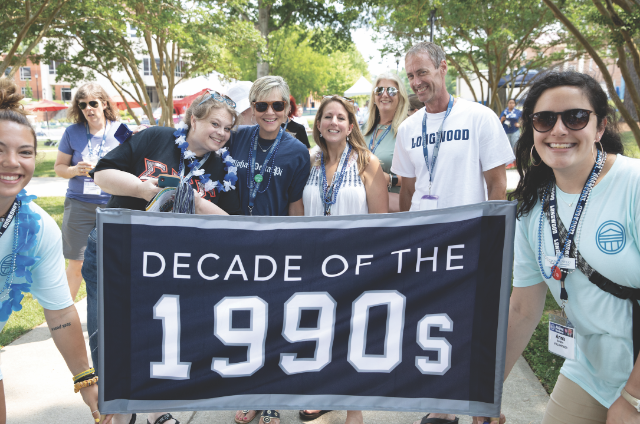 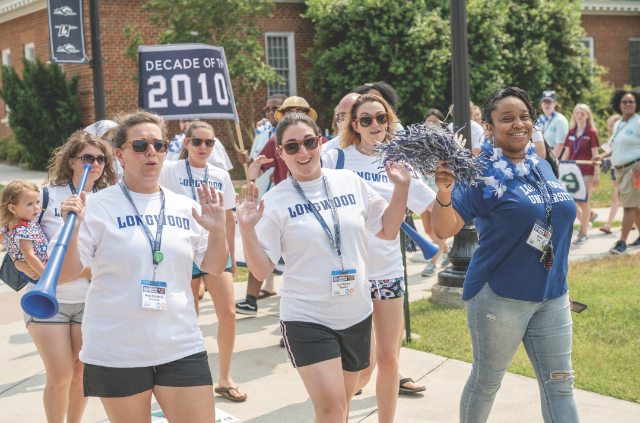 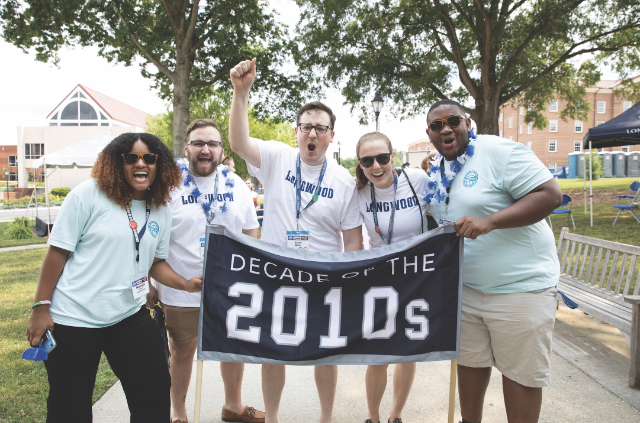