To Lead Is To Serve

When a president and a rector share a vision of what their university can become, great things happen

Rector Marianne Radcliff ’92 and President W. Taylor Reveley IV have been a powerful duo. When Radcliff, an influential figure in public affairs for the commonwealth, was first appointed to the Board of Visitors in 2011, the university was in a period of significant transition. An early task was guiding the search committee that brought Reveley to Longwood in 2013.

Now, at the close of Radcliff’s full eight-year tenure on the board, including two separate two-year terms as rector, Longwood is in full stride and confident in its mission of shaping citizen leaders.

As her Board service comes to an end this summer, Radcliff and President Reveley sat down to talk about their tightknit partnership, the changes they’ve seen and the path for the future.

The role of rector, the elected leader of Longwood’s governing board, is not necessarily well-understood, and it doesn’t come with an instruction manual. What does it mean to the two of you?

Marianne Radcliff: Perspective is what matters. The role of rector, in a way, is to have a sense of real responsibility to future generations and to keep that at the forefront, along with the demands of the present for campus. It’s also important to work with an understanding that the role of being a college president actually is so much bigger than most people can see, with so much pressure.

Taylor Reveley: A board, especially a board with powerful figures from other walks of life, is the means by which academia remains fundamentally connected to and engaged with the broader world. The crucial role a rector and a board play is to provide wisdom beyond the pure confines of campus and make sure that a given institution is really doing the right things to be of service. In that regard, asking good, penetrating questions is one of the things a great board does. And there is a resolve that a great rector and a great board can give to an institution to make the hard decisions and not just default to what would be easy.

MR: Sometimes that’s not a natural inclination— to say, “This is a big step, some people might be uncomfortable, but it’s the right thing to do.” But it’s important, and the board truly trusts the process here. We trust the people here and where we are heading. When I became rector, Longwood was in a situation where it had a number of different directions it could go. You heard a lot of talk about giant online classes, and about how we could get much bigger and how students need to be prepared for one specific job they’ll get right after school. With those pressures increasing, everything that’s so great about Longwood, everything that was so valuable to me as a student, had to be strongly affirmed. We had to say unapologetically, “This is who we are, we’re really good at this, and we don’t have to chase after those other things to do something really powerful here.” That wasn’t easy.

TR: What’s fascinating is that we’ve been doing these things at a juncture when higher ed around the country arguably had long before begun to lose its way. We have worked doggedly to make Longwood an example of how the classic—and I would say revolutionary—model of residential liberal arts education really is the future, as well as what’s made higher education great in the past.

Marianne, you’re enormously knowledgeable about state government and the General Assembly, and both of you are broadly connected in Richmond. For those of us not around the Capitol every day, what is the perception there of Longwood and its trajectory?

TR: Marianne and Longwood can claim a lot of credit for fundamentally helping shift the trajectory of the college-cost question in Richmond. Longwood really has been the leader in the state in holding down college costs during Marianne’s time, our time together. Our tuition increases have been the second-lowest of any public university over the last five years. That’s resonated powerfully in Richmond. It’s also simply the moral thing to do, and that work has galvanized impressions of Longwood for the commonwealth. On both sides of the aisle, I think it’s fair to say there is a sense that Longwood is one of the places that’s really getting things right, not just with regard to cost but more broadly.

It’s great to drive in and see this beautiful college town. … [It] has become a place you want to come to and spend time.

MR: The leadership of the state really does appreciate what we’re trying to do here, in so many ways. They appreciate our efforts to control costs, and they also appreciate the fact that there’s a real understanding by the board and Taylor and the campus of what we do best, where we can make the most difference. 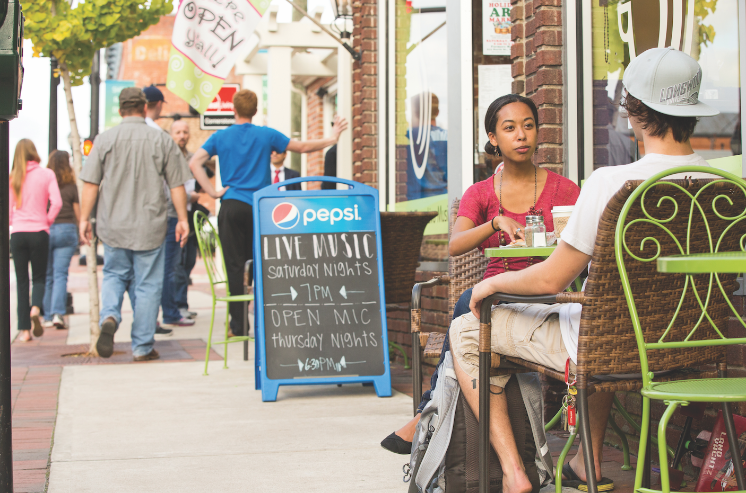 What’s the secret to a successful partnership between a rector and president, and you two in particular?

TR: Trust and candor are hallmarks of what makes it work, so that both the rector and the president can feel utterly free to say what needs to be said, to think the thoughts out loud that need to be cogitated over. We talk often and openly, and genuinely respect each other’s perspectives. That’s hard in any human relationship, and it’s especially important between a rector and a president.

One thing that’s been wonderful also is that, between the two of us, we have a full spectrum of Longwood lore going back well more than a century. My own family ties here go back that far, and my grandfather was president at Hampden-Sydney in the 1960s and 1970s. Growing up I heard all the tales of when my grandmother was in school here, and about her mom as a student here, and her dad—Thomas Eason, the Longwood biology professor whose portrait hangs in my office.

All of that lore was very current for me up through the mid-’80s, and then Marianne’s experience kicks up from the start of her freshman year in 1988 and carries through. Between us, that’s a broad sweep of history and perspective to bring to bear on everything we’ve done here.

How has Farmville changed during your tenure on the board?

MR: We talk about it all the time at my house. It’s wonderful. It’s great to drive in and see this beautiful college town. I just went through this with my own daughter. Some college towns you feel great about, and some make you nervous. This one has become a place you want to come to and spend time.

I’m at that age where the people I went to college with, their kids are looking at schools. I find parents I know—and many of them didn’t go to Longwood—pulling for Longwood as a choice. And I find all of them commenting on how beautiful the campus and the town are.

What do you think will be the long-term legacy of Marianne’s time as rector and a member of the Board of Visitors?

TR: There are so many things. The beauty of the physical campus, the Vice Presidential Debate, the new Civitae core curriculum, our renewed clarity of purpose. Marianne has been absolutely instrumental in the increasing philanthropic and state support we’ve received.

Altogether, this is a university in full stride. That was not the case in 2011, in a period of real transition—even uncertainty. Our progress is a testament to Marianne, testament to the board, testament to how they’ve encouraged and exhorted Longwood.

MR: We’ve been really lucky with the people, certainly with Taylor and his leadership team, but also truly with the board members. All of them are so fond of, and have such tremendous trust and belief in, the leadership team here— they do feel really comfortable asking those hard questions. They believe in this place, and you can do wonderful things if you have that many talented people truly working together with a common purpose.

Marianne, what would you say to people who would like to be more involved with Longwood but aren’t sure if they can be helpful, or how to do it?

MR: It’s really neat to actually roll up your sleeves and try to do good things for a place that means so much to so many people. I was very involved while I was here as a student. As an alum, for a while I didn’t really know how to engage. It’s a lot easier now. There are a lot more opportunities. There’s a structure with alumni and athletics and a lot of other things that makes it much easier to connect.

I love that. It’s one of my favorite things that happened over my eight years. You can come to campus, and there’s somewhere in Maugans you can go and connect. There are people there to talk to you about how you can get involved. And being involved is a special thing to do. I was a first-generation college student, so to feel like you’re doing your part to help people come here after you and graduate and go in new directions, it’s a great way to dedicate your time.