Jonathan Buckley ’16 slams an odd-looking hammer onto the head of a hole punch.

Then, as quickly as he can, he takes out tweezers, picks up a little square of plastic that was under the punch and transfers it to an ultrasound spectrometer. His research mentor, Dr. Kenneth Pestka II, assistant professor of physics, times the maneuver.

As odd as it may seem—at least to a nonscientist—there is almost no hole in the plastic from where the punch went through. That’s because Buckley, of Round Hill, and Pestka are studying self-healing plastics—materials that automatically patch themselves when damaged.

"We have to get the plastic in the machine as quickly as we can," says Buckley, "because we want to get data from as close as possible to when I damaged the sample. This is because the sample starts to heal itself almost instantaneously, so time is of the essence."

The machine, imposingly named the Quasar RUSpec 4000 resonant ultrasound spectrometer, vibrates the plastic at incredibly high speeds, from which Buckley and Pestka can take frequency readings to determine how the substance has changed after the impact.

"These plastics, which have been around for some time, are still poorly understood, and there are still a lot of questions unanswered about the healing process," said Pestka, who has done previous research on the materials. "The study of self-healing materials is a growing field, and breakthroughs are happening all the time, so it’s an exciting and worthwhile project for us to focus on this summer."

But it hasn’t all been hammers and hole punches. For the first four weeks of the two-month PRISM program, Buckley tested and analyzed undamaged pieces of the thermo-plastic. The result was pages of data looking almost like EKG printouts.

The plastics resonate at different frequencies, like guitar strings. Knowing where and how the plastics resonate can lead to insights into how they heal themselves when damaged. So for weeks, Buckley set up high-speed scans on several pieces of plastic—a process that established the baseline for the second part of the experiment.

"Well it was a lot of hard work," said Buckley. "Initially I did not fully grasp how much data we would be dealing with. However, I am glad we acquired all of this data. This will ensure that we do the project right, which in the end is the most important thing."

And pay off it will. As Buckley gets the damaged plastic into the machine, he starts collecting data he will compare to the charts he put together earlier in the summer. That will form the basis of a senior honors thesis, which will be a steppingstone to graduate school and more research opportunities.

Some may even involve hammers. 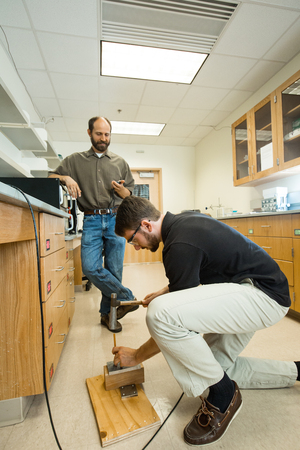 Buckley drives a nail through a piece of self-healing thermo-plastic in the laboratory.