When Longwood University’s new admissions building is built, a group of  archaeology students will know the site’s history better than anyone.

An advanced archaeology class is researching three houses that formerly stood on the site, which is across High Street from the campus’s main entrance. The students are conducting an archaeological survey that began with historical research, recently involved a week of excavation fieldwork and will culminate in a report they will write and submit to the Virginia Department of Historic Resources (DHR).

“These students are getting beginning-to-end involvement in a real-world project,” said Dr. Brian Bates, their instructor.

No other undergraduate program in Virginia is doing something like this. These students will graduate with a unique skill-set that other students can’t match.

The semester-long effort, which also involves the Longwood Institute of Archaeology, is exactly what archaeologists do in a cultural resource management project, said Bates, the institute’s executive director. Many graduates of archaeology programs end up working in this field, also called “contract archaeology.”

“The students first did background historical research, then research design, then designed field methodology and now they’re doing the field methodology,” said Bates while the fieldwork was in progress during the week of Oct. 17-21.

Bates decided to make the archaeological survey the focus of this semester’s Advanced Archaeology 350 class after being contacted last fall by Longwood architect Tom Frisbie-Fulton and Bob Chambers, who will oversee construction of the admissions building for Campus Planning and Construction. DHR officials were interested in the site because it is located within a historic district and also because the Longwood-owned Hardy House, listed on the National Register of Historic Places, backs up to the site.

“We’re trying to get a good look at this site before it’s all gone,” said Bates, also director of the Dr. James W. Jordan Archaeology Field School. “Our job is to see what’s there before anything is ultimately lost. You can’t know what’s there until you dig the holes.”

Cultural resource management projects, prompted by federal legislation and monitored by each state (in Virginia, DHR), aim to preserve a site’s cultural heritage by documenting and assessing  whatever it is found to contain.

“The Institute of Archaeology is supposed to conduct real-world projects, and this is about as real-world as it gets,” said Bates, a 1992 Longwood graduate who is professor of anthropology. “These students are learning about the industry of cultural resource management in what essentially is a compliance project for the Department of Historic Resources.”

Two recent graduates of the archaeology program—Ben Royster ’15, of Chesapeake, who works in the cultural resource management field, and Deanna Megginson ’16—returned to participate in the excavation part of the project. Royster, who served as crew chief, and Megginson, assistant crew chief, also assisted the Institute of Archaeology on a recent 1,100-acre survey in Wise County for the U.S. Forest Service.

In the excavation, the Longwood archaeology program’s new 3-D laser scanner was used for the first time. The tripod-mounted scanner records every physical aspect of a surrounding scene in fine detail by shooting 55,000 points per second.

The site excavated by the nine students, where Buffalo Street runs into High Street, is a small, elevated grassy area that forms Bicentennial Park. Next to the park is the Longwood-owned Crafts House, former home of the admissions office, which will be razed before construction begins on the new admissions facility.

The most extensive excavation was on the site of the easternmost house, near the corner of Buffalo and Randolph streets, where students uncovered the two-tiered brick foundation. Built between 1905 and 1910 and called the Richardson House, after owner-occupant Mary Richardson, the two-story house was acquired by Longwood in 1937.

“This was a massive house—45 feet by 35 feet—on a laughably small foundation,” said Bates, pointing out how the bricks were bowed due to the lack of support. “I wouldn’t be surprised if the plaster walls were constantly cracking, and they were patching them all the time.”

One of the other two houses, both built between 1878 and 1905, was located on the site of the Crafts House parking lot. Between that and the Richardson House was the so-called B.M. Cox House, built by Longwood and perhaps originally serving as student housing.

The Cox and Richardson houses can be seen in the background of Longwood class portraits from the early 1900s. They also appear on old cards, marked “Farmville, Va.,” which may have been postcards, said Craig Rose ’00, principal investigator for the Institute of Archaeology, though he’s not sure why they would have been featured. 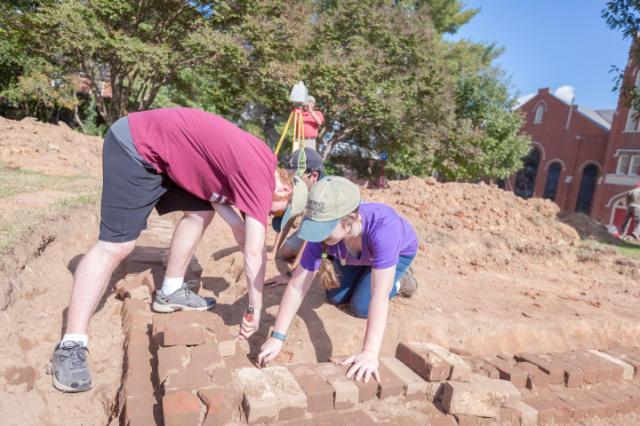