Equal parts restaurateur, savvy marketer and back-to-basics foodie, Adam Russo ’07 invites you to forget everything you thought you knew about school cafeterias.

Actually, it’s more like he’s insisting you do that. Ask Russo about his job running the Prince William County Schools (PWCS) food service, and you’ll unleash an avalanche of ideas, innovations and philosophies that tell the story of what he’s brought to his award-winning operation.

Russo, who started working in his family’s restaurants when he was 6 and took over running the operation when he was a senior at Longwood, says he knew nothing about how meals got onto cafeteria trays when he applied for his first job with a school system in 2013. At that time, it had been six months since he and his family sold their restaurants, and his wife, who was expecting the couple’s second child, told him he needed to get out of the house and get a job.

You can’t be hungry to learn if you’re just plain hungry. We have to ensure that we are serving the proper fuel for our scholars. 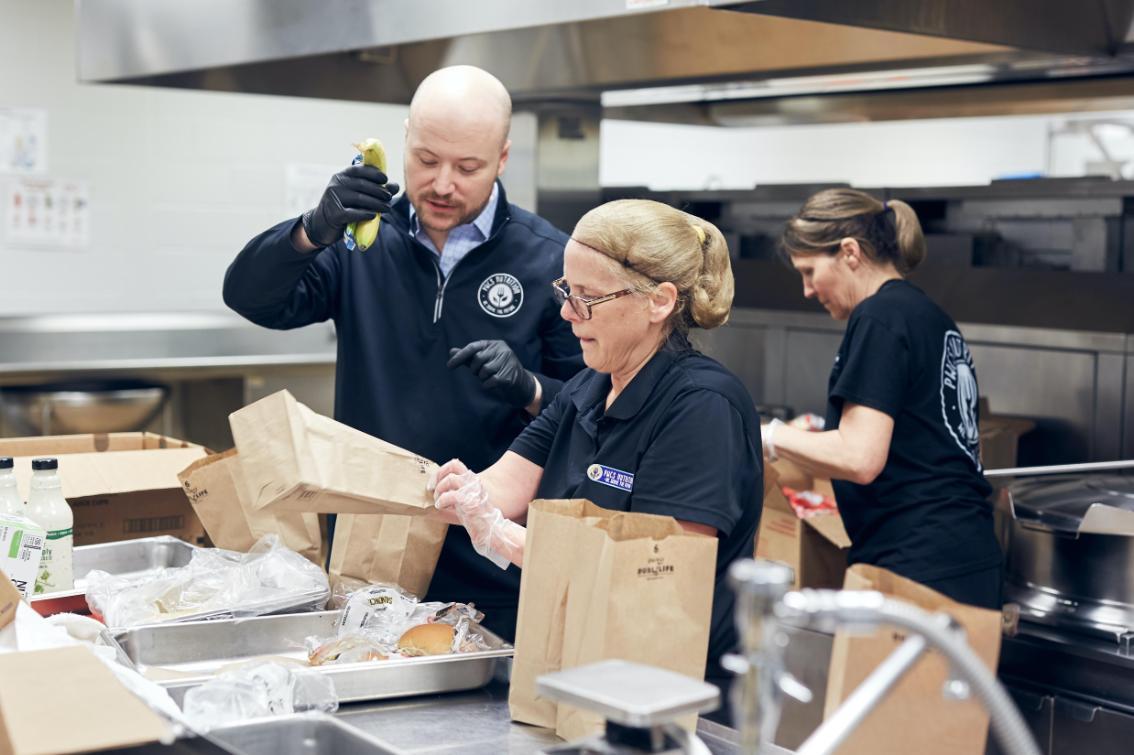 “I had never applied for a job—I even did my internship with our family restaurants. My mother was my only reference,” said Russo with a chuckle. Fortunately, the job was with the Norfolk schools, and Russo’s future boss was familiar with the quality of the restaurants his family had owned in the area. “They took a shot on me,” said Russo.

All it took for him to realize he’d landed in the perfect second career was an encounter with a Norfolk first-grader.

“One day when we were serving frozen strawberries, I had lunch with a first-grader,” said Russo, who had a young son at home and wasn’t surprised when the strawberries ended up all over the young student’s white school-uniform shirt. “Then I saw that same young man several days later with the same shirt on, unwashed, with strawberries still smeared across it, and he was so hungry he was shaking. In Norfolk, more than 80 percent of the students are on free or reduced lunch. I had no idea poverty existed like that. We got him something to eat, and then I went to the walk-in cooler and cried. It made me realize there was a lot of work to be done.”

After two years in Norfolk, Russo spent two years in the Hanover County schools and then signed on in 2017 with Prince William County Schools. With 90,000 students and 101 schools and centers, PWCS is the second-largest school food-service operation in the commonwealth and the 30th-largest in the country, he said.

At Longwood, many of my peers were going to be teachers. I’m finding out why they wanted to do that. They weren’t going to do it for the money—it was because they loved it.

Russo’s initial lack of experience is likely one of the reasons he’s risen to the top so quickly in his new career. Here’s why: He runs a school food service on the same principles that made his family’s restaurants successful, mixed with a generous helping of what he learned about management and marketing at Longwood.

For Russo, it all starts with good-tasting, nutritious food, with minimal processing and cooked from scratch whenever possible. (High-fructose corn syrup and unpronounceable preservatives and fillers are on his list of banned ingredients.)

When Prince William County school cafeterias serve dinner rolls, shortcake or other baked goods they come straight out of school ovens. There’s fresh fruit and a Panera-esque specialty salad offered every day. When hamburgers are on the menu, they’re made from beef with just three added ingredients—salt, pepper and garlic—unlike the 12-ingredient beef product that had previously been used. And Russo says his schools make a chicken sandwich that can go head-to-head with Chick-fil-A.

As proud as he is of the food, he gets even more excited about the other aspects of his job: starting new programs; providing excellent customer service; building relationships with the principals, teachers and families in his district; professionally branding his operation; and giving his 1,000 staff members additional training and advancement opportunities.

Russo’s way of doing things pulled the Hanover County Schools’ food operation out of a million-dollar-plus deficit after just one year and has resulted in numerous accolades for PWCS, including FoodService Director magazine’s 2020 Operation of the Year award (the first to go to a school division), and for himself, including the 2021 Food Achievement Management Excellence Silver Leadership Award.

Most of all, however, Russo is focused on the vital role proper nutrition plays in the education of children and teenagers. “You can’t be hungry to learn if you’re just plain hungry,” he often says. “We have to ensure that we are serving the proper fuel for our scholars.”

Pre-pandemic, in a normal day, he and his staff served 95,000 breakfasts, lunches, dinners and snacks each day to their “guests,” as they refer to students. When Covid-19 hit last spring, Russo had to find alternate ways to provide students with the nourishment they need to concentrate and learn. He started out like most schools, with individual breakfasts and lunches, but then he had a better idea.

He switched to providing weekly bulk-style grocery kits to supplement families’ own grocery shopping. Distributed in a drive-up arrangement, the kits include whole grains, protein, vegetables, fruit and milk.

“Here’s a whole loaf of bread, a bag of oranges, a bag of apples, a gallon of milk,” said Russo, adding that one week’s kit included pre-cooked spicy beef, locally sourced tortilla chips, cheese and cherry tomatoes. “We’re feeding 20,000 to 30,000 kids every day. We’re able to give them so much more nutrition this way.”

The PWCS program—which not only increases the amount of food families receive but also enhances safety by reducing personal contact—has been copied by other school districts, Russo said. Hot meals still are provided to students who are learning in person at PWCS schools.

It’s clear that Russo loves going to work every day.

“At Longwood, many of my peers were going to be teachers. I’m finding out why they wanted to do that. They weren’t going to do it for the money—it was because they loved it,” he said, adding that he now can identify with that motivation. “I didn’t realize my passion for education and my passion for the underserved.”