This week, Farmville residents watched as a fresh new marquee was hung along the corner of High and Main streets, soon to be home of the High Street Theatre, a new cinema and black-box theatre envisioned as a place for community events and film.

The 50-seat theater was developed in a partnership between Longwood, the Longwood Center for the Visual Arts, and Longwood Real Estate Foundation.

When the space is open, it will fill a real need in the community as a performance and gathering space for a lot of different organizations. That coupled with quirky favorites and independent films make this a really exciting project going forward.

It will serve as a cultural outpost for the Farmville community that will host varied programming -- from a fantastic film line-up to intimate stage performance.

“One hallmark of a thriving college town is a cool theater that offers programming you can’t find anywhere else in the community,” said Rachel Ivers, LCVA director. “When the space is open, it will fill a real need in the community as a performance and gathering space for a lot of different organizations. That coupled with quirky favorites and independent films make this a really exciting project going forward.”

The theatre will add to both the life and look of historic Farmville. The marquee, designed locally by Joe Giles Signs, was installed on the front of the building and is one of the final steps in construction of the theater, which will be open as indoor gatherings are permitted post-pandemic.

With an eye toward advancing the revitalization of downtown in recent years, including new restaurants and the Hotel Weyanoke, Longwood had recently leased several storefronts along High Street, and the vision took shape quickly. 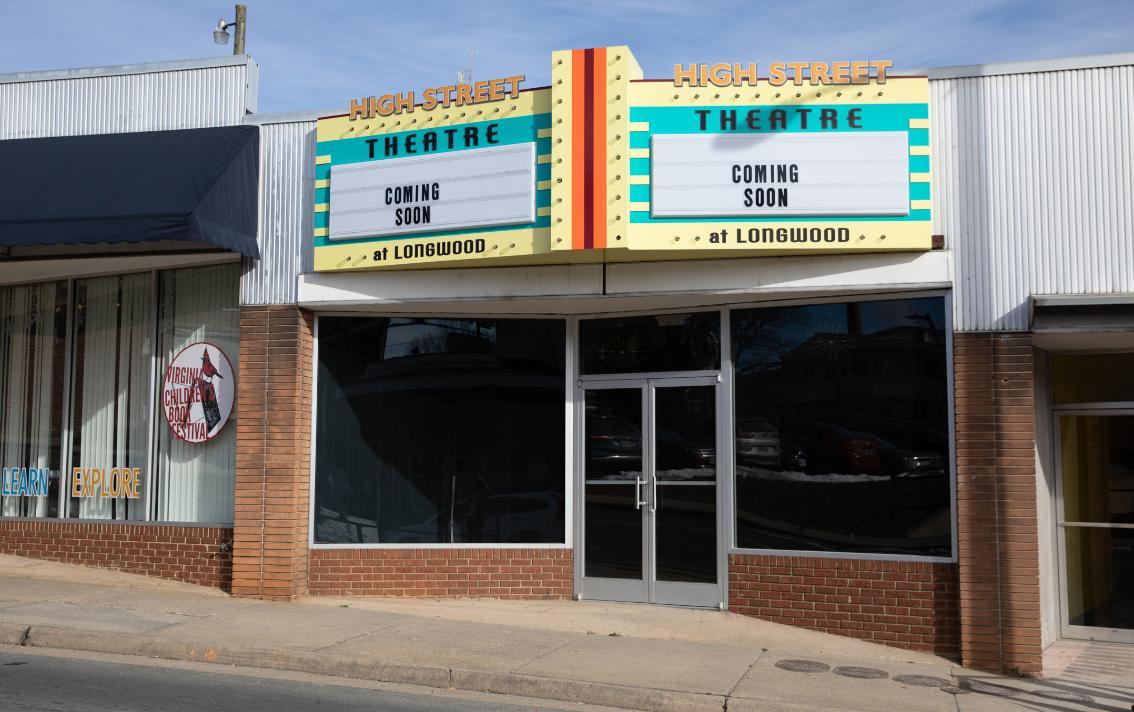 It will bring together a broad range of people from across our community, energize cultural offerings, and serve as an important milestone in the renaissance of downtown.

The idea for a small theater arose after conversations with film aficionados, local cultural organizations in need of performance space, and Longwood professors seeking an additional space for classes or lectures. Longwood’s Real Estate Foundation has been working to renovate the interior stage and screening space.

An advisory group made up of a cross-section of community members led by Greg Tsigaridas, a film enthusiast and computer systems engineer at Longwood, is leading the development of a series of themed programming centered around existing local events. The group plans Friday Night Frights film showings, an International Film Festival, holiday-themed movies, Black History films and a host of other first-run and classic movie lineups that will have something for everyone in the community.

“We’re very excited to get the High Street Theatre up and running as soon as possible,” said Ivers. “There are so many cultural programs in Farmville already and there’s an opportunity to build on that momentum. So from musicals around Summer Garden Opera to children’s movies around the Virginia Children’s Book Festival, we are looking forward to being a true community partner, while also showcasing films that you typically wouldn’t be able to find in Farmville.”

New life has been breathing into the storefronts on the corner of High and Main streets recently. Last year, the Virginia Children’s Book Festival opened a space next to the theatre that will host authors, offer workshops, and other reading events throughout the year when meeting restrictions are lifted. A new restaurant, Bandidos, just opened a few doors down.

“One of Longwood’s main priorities is to break down barriers between campus and downtown Farmville, helping strengthen one of America’s great college towns” said Longwood Chief of Staff Justin Pope, who was instrumental in bringing the idea to life. “The High Street Theatre at Longwood is another step forward in building bridges to the downtown community and being a good partner to area organizations that need black-box performance space. It will bring together a broad range of people from across our community, energize cultural offerings, and serve as an important milestone in the renaissance of downtown. It will also be a welcome amenity for families and young children, and will help bring us all back together in person as that becomes more and more possible over the months ahead.”