A noted historian and a successful entrepreneur offered some “What now?” suggestions for Longwood’s newest graduates at commencement ceremonies in May.

Longwood awarded 960 bachelor’s degrees in the May 20 undergraduate ceremony and 176 master’s degrees the previous evening*.

During the ceremony for undergraduates, Dr. Edward Ayers encouraged graduates to shape history rather than just accept it, citing Barbara Johns, who sparked the civil rights movement by leading the 1951 school walkout in Farmville, as an example of someone who took history into her own hands.

“Barbara Johns walked out of that tarpaper school in 1951 because she didn’t think history was too heavy to move. She moved it. The world is full of possibility, not merely more of what has always been,” said Ayers, referring to the walkout at the segregated R.R. Moton High School to protest unequal and inadequate conditions for African-American students who attended there. 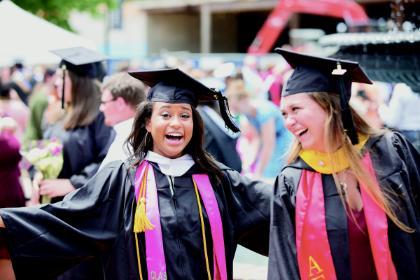 Leigh Sugg (left), a communication studies major from Newport News, and Genna Bacon, a biology major from Hampton, celebrate one of the most important accomplishments of their lives. 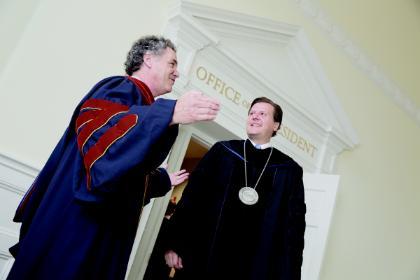 “We always live in unusual times, and we might as well get used to it,” said Ayers, president of the University of Richmond from 2007-15. “The unexpected—good and bad—always happens, but we don’t have to take the bad that happens to us. History can be moved in ways that are better.

“The 21st century has been a surprise, but this town has seen history that dwarfs anything we see in our present day.”

In the graduate ceremony, Dr. Gilbert Bland, an entrepreneur who is chairman of the GilJoy Group and a former chairman of the State Council of Higher Education for Virginia, urged graduates to be prepared for “unknown challenges” and “that anonymous teacher called failure.” 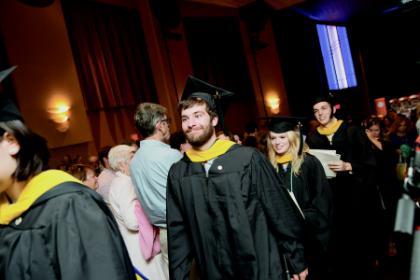 “You will face the increasing reach and uncertainty of globalization, life’s circumstances, politics, organizational and budgetary cutbacks or the extensions of the technological revolution,” said Bland. “Within these moments of uncertainty are where your true learning, fortitude, creativity and ability to compartmentalize and balance the various demands in your life will be displayed and will rank among your life’s greatest lessons and teachers.”

* These numbers include graduates who completed their studies in August and December 2016. 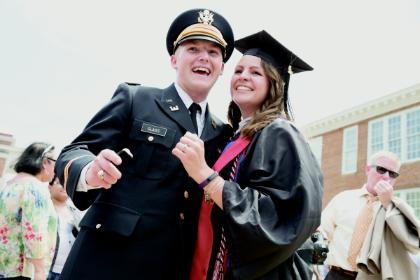 It was more than commencement for two members of the Class of 2017. In addition to receiving their degrees, Daniel Benjamin Glass, an economics major from Vienna, and Malorie Amanda Kuhn, a history major from Marshall, became engaged during undergraduate commencement. Glass also was commissioned in the Army.