Out in the Cold

Susan Delong Smith ’79 describes herself as “an Alaskan born in Virginia.”

She fell in love with “the land of the midnight sun” on her first visit in 2007 and became a resident in 2015, when she moved to a small, remote island 300 miles from the mainland to teach elementary school. In August, she’ll move to a school in the state’s interior that “you can get to only by airplane, boat, dog team or snowmobile.”

St. Paul Island, Smith’s home for the last two years, was a big change from Lawton, Oklahoma, where she spent the previous 28 years of her career.

The wind-swept volcanic island in the Bering Sea is home to about 450 people, mostly Aleuts. Smith’s assignment there was teaching fourth- and fifth-graders at the island’s only school, which serves 55 students from kindergarten through high school.

“You know everybody. It’s the safest place I’ve ever lived, and you don’t have distractions like sports or piano lessons,” said Smith. “There were challenges—less technology than back in Oklahoma, and, with many parents taking a hands-off approach, my students had fewer boundaries; they sometimes stayed out until 2 a.m. on school nights. They were expected to figure out life on their own. 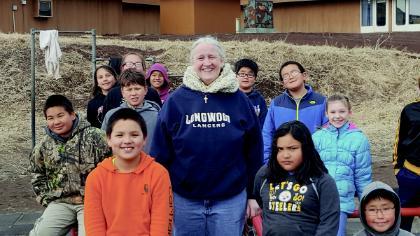 Susan Delong Smith ’79 in St. Paul Island, Alaska,with some of her students.

“However, the island was great for outdoor field trips. We’d go to a seal blind or the lagoon or a beach, and we did an ecological survey through the Virginia Ocean Conservancy. It was a wonderful experience. Anyone who wants an adventure should do it.”

Her upcoming assignment is Takotna Community School (Takotna’s population: 52), where she’ll be one of two teachers and also serve as principal. Fifteen children attend school there. “It’s always been a dream of mine to live on the Iditarod Trail, and the school is located on one of the trail’s most popular checkpoints,” she said.

Before she moved to Alaska, the state was the site of several of Smith’s summer “adventures,” many related to her work as a middle school science teacher. She participated in NOAA’s Teacher at Sea Program in 2009, mapping the ocean floor in Trocadero Bay during a 12-day cruise. In 2013, she was one of three finalists in the Iditarod Teacher on the Trail program, in which teachers integrate the annual 1,000-mile sled dog race into their curricula.

Alaska’s appeal? “It’s beautiful; there is very little pollution. I would have moved to Alaska in my 20s if I had known what a great place it is. There are moose, bears and seals, and St. Paul Island has all kinds of birds.” She also is “obsessed” with sled dog racing, and plans to volunteer at next year’s Iditarod.

Smith caught the travel bug early in life. She has taught five times in China and twice in Japan during summers, was an exchange teacher in Colombia and has visited all 50 states.

“When I was young, I had to see the world. I still have to have a change of scenery. I want to go to Antarctica, but it’s hard to find a traveling partner.”

After teaching in Alaska for two more years, she plans to retire with her husband, Wayne, probably to Florida or south Alabama.