Longwood women’s soccer will need to clear some room on the trophy shelf.

After a banner year that is among the best in school history, the program saw head coach Todd Dyer ’93 named Big South Coach of the Yea; junior Sydney Wallace ’19, a kinesiology major from Fredericksburg, named Defensive Player of theYear; senior Teresa Fruchterman ’18, a biology major from Annandale, named Scholar-Athlete of theYear; and freshman Carrie Reaver ’21, of Thurmont, Maryland, (major undeclared) named Freshman of the Year. All were first-time awards for the Lancers and earned Longwood bragging rights as the first Big South women’s soccer program to win four of the conference’s five major awards in the same season. 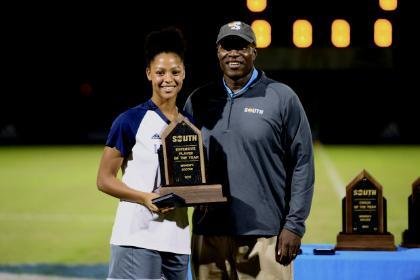 In total, the awards mark the program’s largest haul since joining the conference six years ago.

The accolades come on the heels of a record-setting season for the Lancers, who went 12-4-3 during the regular season to set a program record for highest winning percentage in the Division I era. The Lancers entered the Big South semifinals on a nine-game unbeaten streak and boasted the conference’s best defense, leading the league in shutouts and goals against average.

At press time, Longwood had just shut out Charleston Southern 3-0 in the quarterfinal round of the 2017 Big South Championship to advance to the semifinals for the second straight year