Scream in the Park

Baseball team members get into the spirit of the event with costumes ranging from Buddy the Elf to Thor.

Cowboys and Minions and Deadpool, oh my.

The community event drew more than 300 people, including 100 costumed children, to Longwood’s home field, breaking last year’s attendance record. The Halloween-themed scrimmage has grown in popularity each year since it began in 2016 and has become a staple in the community service campaign that is one of the hallmarks of Ryan Mau’s tenure as head coach.

This year every member of the baseball team and coaching staff donned costumes ranging from Buddy the Elf and Black Panther to Erik Killmonger and the Wacky Waving Inflatable Guy. 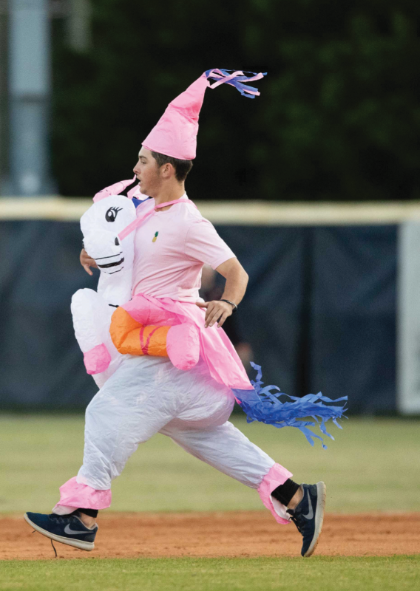 Bryan Golnick ’22 finds out it’s definitely harder to get on base when you’re wearing a unicorn costume. 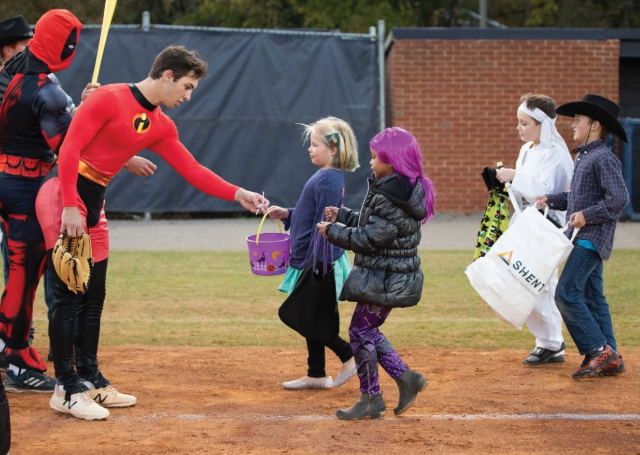 More than 100 children turned out to watch the scrimmage and to trick-or-treat around the bases after the game. Team members, including Mike Esposito ’22, handed out more than 2,000 pieces of candy.

Mau went all in as Johnny Depp’s Mad Hatter, while assistant coach C.J. Rhodes pitched as David S. Pumpkins and assistants Daniel Wood and Garrett Lovorn went head-to-head as coaches Sumo Wrestler and Crash Test Dummy. The capacity crowd took in the game to a soundtrack of Halloween hits and announcing by Michael “Squints” Palledorous, played by T.J. Wengert ’20, a communication studies major.

“We enjoy providing an entertaining event and a safe trick-or-treating environment for the community,” Mau said. “Our players and staff continue to step up their costume selections every year, which is what makes this event the growing hit it has become. The game is fun for our players and humorous for the spectators.”

The Ghouls defeated the Goblins 7-6 in the seven-inning scrimmage thanks to a game-tying grand slam in the final inning from Eric “Ace Ventura” Crain ’19, a business administration major. The hit earned Crain a homeplate mobbing from a cast of teammates that included a squirrel, a dinosaur rider, Thor and Waldo, among many others.

Following the game, the team invited children in attendance onto the field for an around-the-bases version of trick-or-treating, where the costumed Lancers handed out more than 2,000 pieces of candy.