The Longwood community came together in February to host the first Lancer Invitational, a powerlifting meet for Virginia Special Olympics athletes.

“It was a great opportunity to provide the athletes a chance to compete early in the season, and to get on campus and do something different for a change,” said assistant sports performance coach C.J.

Roth ’16, who organized the event in addition to his normal duties in training Longwood’s student-athletes. Roth, who was a four-year member of Longwood’s baseball team and team captain as a senior, shouldered the bulk of responsibility for putting on the event, coordinating everything from setting up the facility to organizing volunteers and working with the Virginia Special Olympics organization. The added responsibility was nothing new for Roth, who demonstrated his proficiency as a citizen leader during his stint as president of Longwood’s Student Athlete Advisory Committee.

“The planning started back in November, when we had our first meeting about it, and from then on it was a nonstop process of getting everything logistically figured out,” said Roth.

Student-athletes from Longwood’s women’s tennis and cheerleading programs volunteered in various capacities, as did several members of Longwood’s faculty and staff. Volunteers helped with everything from announcing events to running the lifts.

Volunteer turnout was so overwhelming that Roth had to turn down dozens of students and staff members, including coaches of several Longwood teams, who wanted to help. Undaunted, they showed up anyway, creating an impromptu cheering section for the meet.

“All in all, we got really good feedback, and I know a lot of people really enjoyed it,” Roth said. “We definitely plan on continuing it next year. It was more than an athletics event; it was a campuswide event.” 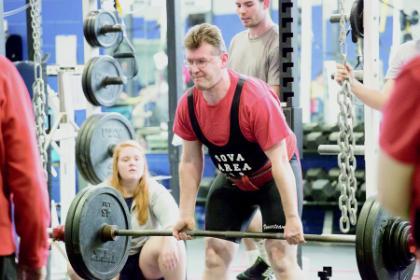