The Big South Conference recently introduced its new brand identity, highlighting the league’s commitment to its student-athletes and re-establishing the conference’s vitality, personality and longstanding success in NCAA Division I athletics under a new mantra: “Where Winners Are Made.”

The unveiling in January featured a league-wide effort that showcased Big South student-athletes from all 10 member institutions on social media, videos and regional advertising materials. Representing Longwood were Darrion Allen ’17, men’s basketball, a criminal justice major from Pompano Beach, Florida; Rosen Ilchev ’17, men’s tennis, a kinesiology major from Sliven, Bulgaria; and Elizabeth McCarthy ’17, softball, a kinesiology major from Dunnsville. Also as part of the campaign, Longwood athletics is now featured on multiple billboards in Richmond and the Farmville area. 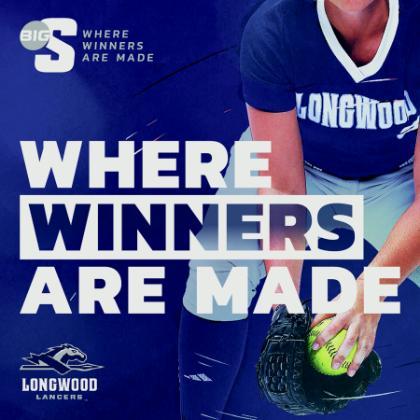 Women’s basketball point guard Micaela Ellis ’18, a kinesiology major from Oak Park, Michigan, broke Longwood’s single-game assists record this season, dishing 15 dimes as part of a double-double effort in an 83-78 win over Winthrop on Feb. 11. The 15-assist performance snapped a 30-year-old record previously held by Caren Forbes, whose 13 assists had topped Longwood’s list since the 1986-87 season.

The double-digit assist performance was the second of the season for Ellis, a team captain who leads the Big South in assists and minutes per game.

Men’s basketball guard Darrion Allen ’17, a criminal justice major from Pompano Beach, Florida, joined a prestigious club this season when he scored the 1,000th point of his four-year career as a Lancer. Allen, who was part of head coach Jayson Gee’s first recruiting class at Longwood, became the fifth Lancer of Longwood’s 10-year Division I era to join the 1,000-point club and the 21st in school history.

That milestone punctuated a standout career for the 6-2, 176-pound shooting guard, who leads the Big South in minutes per and ranks among the conference’s top 10 in scoring, free throw percentage, made 3-pointers per game and blocks. One of the top free-throw shooters in school history, he ranks among Longwood’s all-time top five in career free throw percentage

Longwood’s Student-Athlete Advisory Committee (SAAC) elected its new officers in November. The organization is made up of student-athletes who provide insight into the student-athlete experience as well as input on the rules, regulations and policies that affect student-athletes’ lives on NCAA member institution campuses.

Shentel subscribers can watch Longwood men’s and women’s basketball Big South Network broadcasts on Channel 81. The games will be simulcasts of the Big South Network productions, which provide live, high-definition coverage of more than 50 Longwood athletics contests each year. Longwood plans to extend the coverage to its baseball and softball programs this spring, and the field hockey, lacrosse and men’s and women’s soccer programs next season.

The partnership with Shentel, formally Shenandoah Telecommunications Company, is in addition to Longwood’s existing broadcast options on the Big South Network and Farmville radio station WVHL 92.9 Kickin’ Country FM. Founded in 1902, Shentel is a publicly traded telecommunications company based in Edinburg that provides cable, telephone and Internet services throughout the mid-Atlantic region.