Kate Spradlin ’19, a basketball standout, was one of three Longwood students who shared valedictorian honors this year.

A Big South championship in softball; top-three conference finishes in field hockey, women’s lacrosse and women’s soccer; and the first Division I postseason appearance and postseason victory for men’s basketball.

And that’s only half the story. Longwood’s 200-plus student-athletes also were in peak form academically. This past semester they posted the highest spring-semester GPA—3.12—since the department began tracking that data in 2008. And that milestone followed on the heels of a record 3.14 overall GPA in the fall.

'[T]he academic performance of our student-athletes this season may be the most impressive thing we have accomplished as a department.’

“It has been an incredible year for Longwood athletics in many facets, but the academic performance of our student-athletes this season may be the most impressive thing we have accomplished as a department,” said Director of Athletics Michelle Meadows.

“For our athletes to register a 3.14 in the fall and follow that with what they did this spring shows that these numbers are no fluke. Our coaches, administrators and student-athletes should all be commended for setting new standards in the classroom, all while continuing to raise the bar on the field.”

The spring success was widespread throughout Longwood’s 14 varsity programs, with 11 of those recording a spring GPA of at least 3.0 and more than 60 percent of student-athletes hitting that mark individually. Women’s cross country achieved the highest GPA of any team with a 3.58, while men’s golf set the standard for the men with a 3.41. Field hockey, women’s soccer and softball also met the 3.30 team GPA mark, while six members of the women’s soccer team and four women’s lacrosse players made the President’s List for posting perfect GPAs of 4.00 for the term. 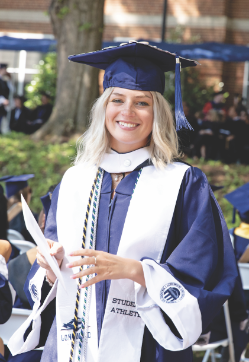 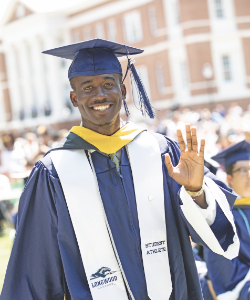 Longwood softball, winners of the 2019 Big South Softball Championship, paired its title run with a 3.32 team GPA, the fifth-highest in the entire department and a record high for the sport. Men’s basketball and women’s cross country also achieved their highest-ever academic marks during the spring.

“We’re proud of our student-athletes, not just for their work this semester and last, but for the years-long commitment to making classroom performance a pillar of what we do in the Longwood athletics department,” Meadows said.

“Earning this caliber of grades is not something that happens overnight. It’s the byproduct of an environment within each program that our coaches, administrators and faculty have strived for from day one,” she added. “Longwood is serious about developing young people in all facets, and this performance is another example of that.”