Orientation for incoming students is the beginning of a yearlong process to help students successfully transition to college life. It’s just one of the programs run by Dr. Emily Heady, senior director of student success and retention, and the Office of First Year Experience and Family Programs. Here Heady welcomes new students and their families.

Dr. Emily Heady has an economy-size carton of individually wrapped cheese crackers on the bottom shelf of the bookcase in her office. When asked if she has a chronic case of the late-afternoon munchies, she just smiles.

Because of her dual role as an English instructor and as the senior director of student success and retention, Heady has a steady stream of students in and out of her office. Many of them are one-time visitors, but there are a few who seek out a stronger connection with her in addition to the occasional snack.

They’re looking for a mentor, and they’ve come to the right place.

Heady is a student of mentorship. She knows the research on how it impacts student success backwards and forwards, and she has put her own relationship with her faculty mentor at Ohio State under the microscope to learn from it. She brings all this to the table with her staff and with the students who turn to her for guidance and advice.

Heady, who came to Longwood in 2017, took some time recently to reflect on why mentoring is so important and what makes Longwood’s brand of mentoring different from other universities.

What is your definition of mentoring?

A good friend of mine who works in higher education talks about the distinction among teaching, training and mentoring. Teaching is imparting knowledge—think classroom lecture. Training is where you work alongside someone, like in a trade, to show them how to do something. Mentoring is where you get to know the person and how they learn. And then you teach them and train them in a way that makes sense to them.

You’ve said you had a strong mentor as an undergraduate and that the two of you are still in touch. How does that experience inform your work at Longwood?

My mentor was an English professor, and she pushed me so hard. I can’t tell you how often I think back to the way she worked with me when I’m trying to help a student. I remember thinking she was mean, but she just knew I could do the work. If she hadn’t pushed me so hard, I wouldn’t have done nearly as well when I applied to graduate school. Then she sat down with me and my list of graduate programs and said, “You’re not going to be happy there” or “This is a person you could work well with.” She could only do that because she knew me.

So knowing what makes a student tick is critical to good mentoring?

Absolutely. For example, I had a young woman in my office recently. Last year she was a peer mentor— a student specifically selected and trained to help new students transition to Longwood—and she hit a bit of a snag. I had to have some tough conversations with her—and I knew her well enough to do that. We worked through it, and she’s stayed in touch. She came by that day to say thank you and to tell me it was a better learning experience than if we’d just let it slide.

'Mentoring is in the blood here. It's in the culture.' 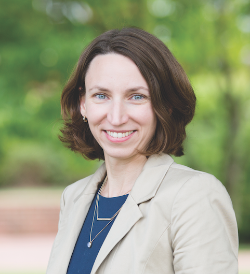 We often talk about how faculty and staff at Longwood get to know students and really care about their success. Do you see evidence of that, and do you consider it mentoring?

I think it is, yes. Mentoring is in the blood here. It’s in the culture. We’re here for students, and we thrive on those relationships. If I’m teaching a 300-level English class and I’m having a situation with a student, I can walk down the hall asking if anyone knows that student. Five people will come out of their offices and give me thoughtful, detailed information about how that particular student responds well or doesn’t respond well. They can tell me—for that student—what’s worth worrying about and what’s not. You just don’t get that anywhere.

So mentoring is different at Longwood than at other institutions you’re familiar with?

I’ve been a student or a faculty member at four other institutions, and I’ve never seen anything like what we do here. Most universities have resources to help students transition, but there are very few universities that have a success coach for everybody and that have an assigned advisor from the first semester for everybody. We have both here.

What exactly are success coaches?

The success coaches are staff and faculty who signed up to serve as a resource and a leader for a group of freshmen throughout the fall semester. I actually coach a group. We also assign a peer mentor to each group. Coaching groups are an interesting concept. It’s this idea of creating a noncurricular experience that allows students to come together and create a sense of belonging in their freshman year that is not necessarily tied to a faculty member they deal with on a daily basis. Every freshman is a part of one of these small groups, which are built around a shared interest such as fitness, blogging, theatre, international food and travel, or just staying on track academically.

How are the coaching groups working so far?

This is the second year the program has involved all freshmen, and we’re seeing that it’s having an impact. For example, last year there was a significant reduction in the overall number of freshmen who ended their first semester on academic probation. 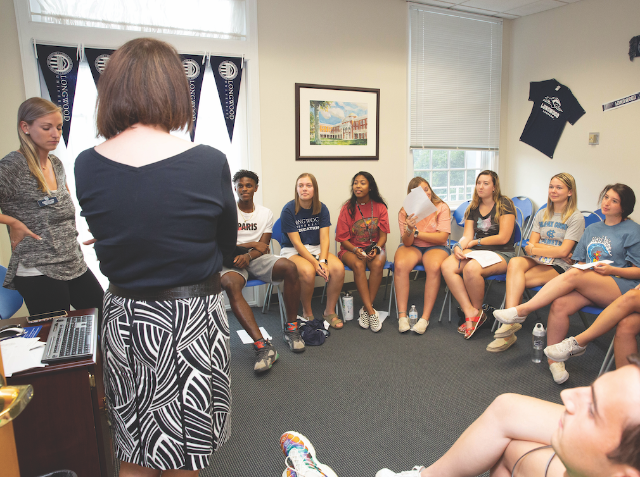 All freshmen are assigned to one of more than 60 coaching groups, which, like this one, bring together small groups of students with a peer mentor and a coach, who is usually a staff member, to create a sense of belonging (Photo by Sam Chase ’21).

You spend a lot of your time thinking about how to help students be successful. In a broad way, how does mentoring factor into that?

Going back to my undergraduate mentor, she was willing to help me think about what the rest of my life was going to be like. If a student doesn’t have a mentor but works hard at a good college, they’ll probably get the skills they need to do reasonably well in a career. But I don’t know that they’ll be able to do that with a lot of self-knowledge or that they’ll be able to do it strategically. Having a good mentor really helps you play your cards right.

What are the characteristics of a good mentor?

Not everybody who wants to be a mentor is going to be a great one. I think a good mentor is fundamentally unselfish. They have a willingness to listen to the other person and to get to know them. And they give advice that makes sense for the person they’re mentoring. They also need to be noncompetitive. A good mentor thinks, “I want you to succeed because you’re valuable. And if you pass me—awesome.”