At the Cabin, under the Rotunda dome, on Stubbs Lawn, at the athletics complex, in the residence halls, on Iler Field, out at Lancer Park.

On the weekend of June 2-4, there was barely a place on campus where you didn’t run into Longwood alumni — and not just a few of them. With nearly 700 people registered for activities that started Friday evening and went through Sunday morning, Longwood’s first Mega Reunion Weekend proved to be a big draw.

Ron Orr ’84 said he signed up to have the opportunity to reconnect with friends — a sentiment shared by many who attended. Longwood is my roots. Once you go to Longwood, it’s in your blood,” he added.

Rob Ford ’79, whose daughter plans to enroll at Longwood in the fall, said he had previously been to reunions for his fraternity, but he liked the “broader focus” of the Mega Reunion. “You get a chance to connect with different decades,” he said, proving his point by mingling with alums from the 1980s and ’90s at their Friday night reception at the Cabin.

"Once you go to Longwood, it’s in your blood." 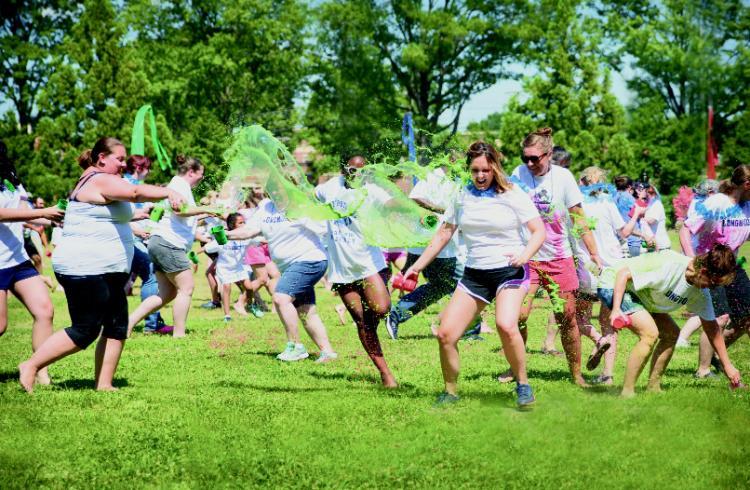 When are you too old to sling red and green paint at your friends? Never. Alums from a wide range of classes went all out for Alumni Color Wars. 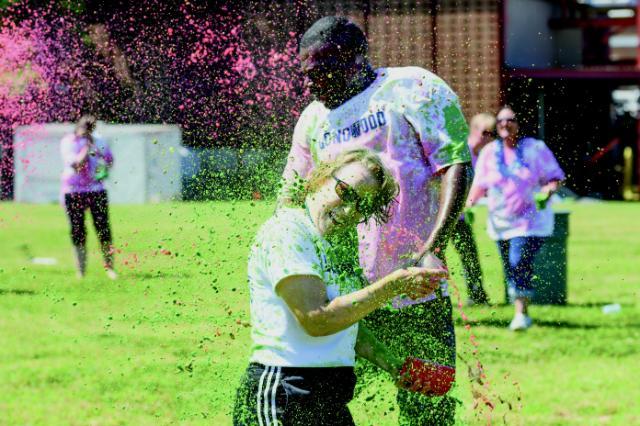 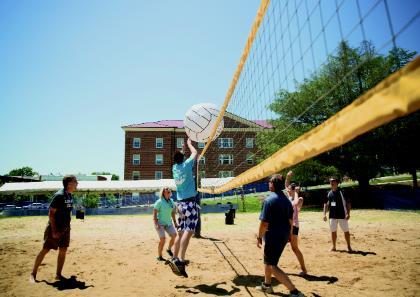 The ‘mega’ theme carries over into an oversized volleyball game on Stubbs Lawn. 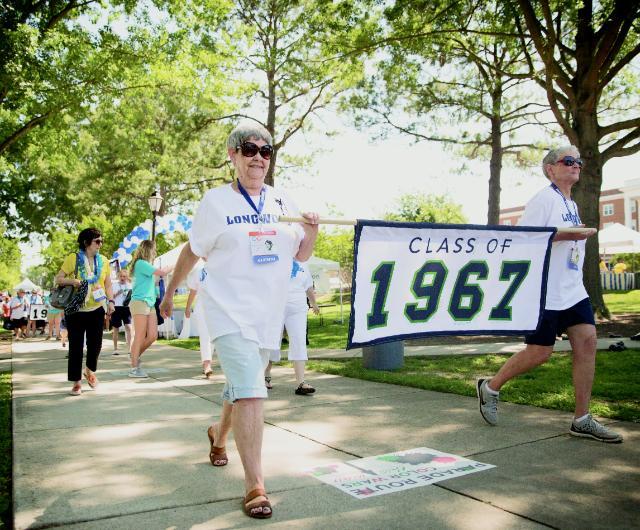 Anne Lancaster Hall ’67 (left) and Deedie Grimstead Cote ’67 lead their class from Stubbs Lawn to Iler Field for Alumni Color Wars. In honor of their 50th reunion, members of the Class of 1967 raised $904,636 over the last five years from 150 donors. Of that, $26,172 was used to endow a fund that will help area residents afford services provided by Longwood Speech, Hearing and Learning Services. 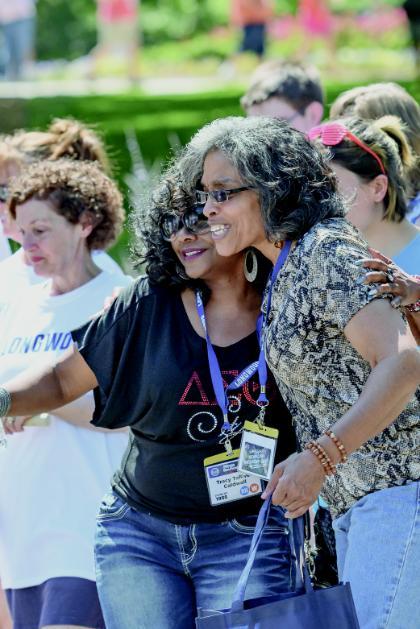 Tracy Tolliver Caldwell ’88 (left) and Queen Hardison-Lassiter ’82 reach across classes for a hug.

Reconnecting wasn’t limited to fellow alums. Janet Lindner ’77 was excited to spend some time with Dr. Susan May, one of her favorite professors. “I took Shakespeare and 17th-century literature with her. Her enthusiasm for the subject matter was infectious,” said Lindner.

After Friday night’s decade receptions, the entire group came together for activities on Saturday, including a march to Iler Field for an alumni version of Color Wars.

On the sidelines, providing moral support to two classmates slinging red and green paint on the field, were Janie Wall Evans, Lucy Flannagan Blevins, Anne Lancaster Hall, Eleanor Bebe” Woodruff Breckenridge and Nancy Piland Creekmore, all from the Class of 1967.

“It’s been great — these old girls like to get together,” said Blevins.

“Fifty years makes no difference. You come back, and it’s just like it was,” added Breckenridge.

Creekmore took slight exception to that statement. “I don’t think we ate like this. And we definitely didn’t have bloody marys for breakfast.” 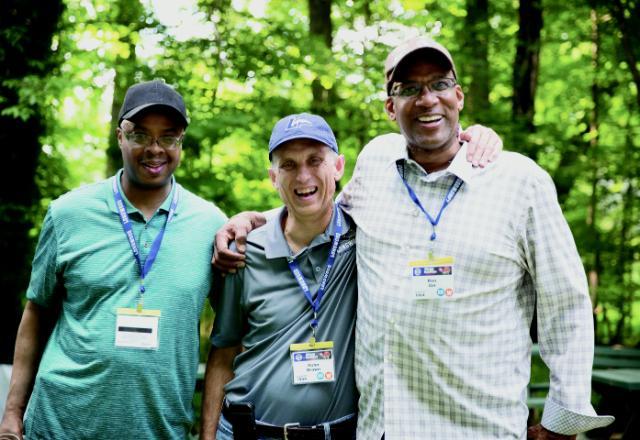 Adrian Armstrong (left), Rohn Brown and Ron Orr, all members of the Class of 1984, reminisce about the days of old at the ’80s and ’90s reception on Friday at The Cabin. 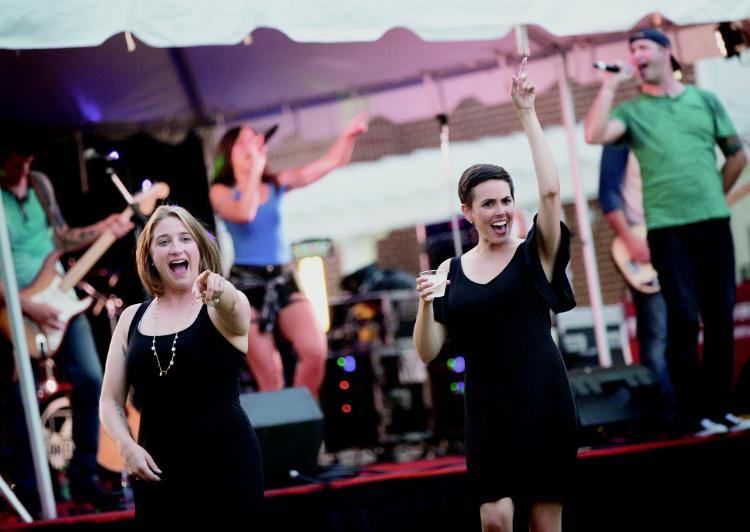 Megan Parker ’09 (left) and Colleen Whitney Nichols ’10 get the party started at the 2000s reception Friday. 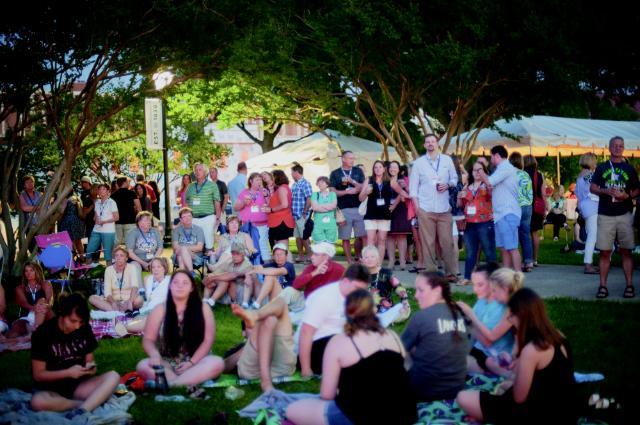 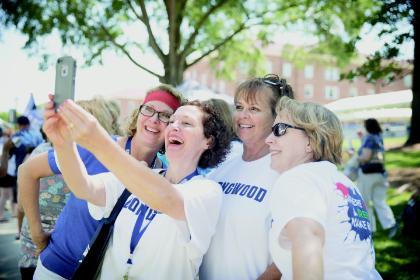 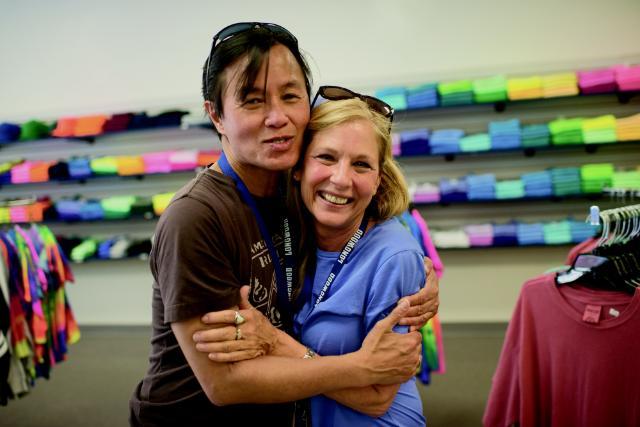 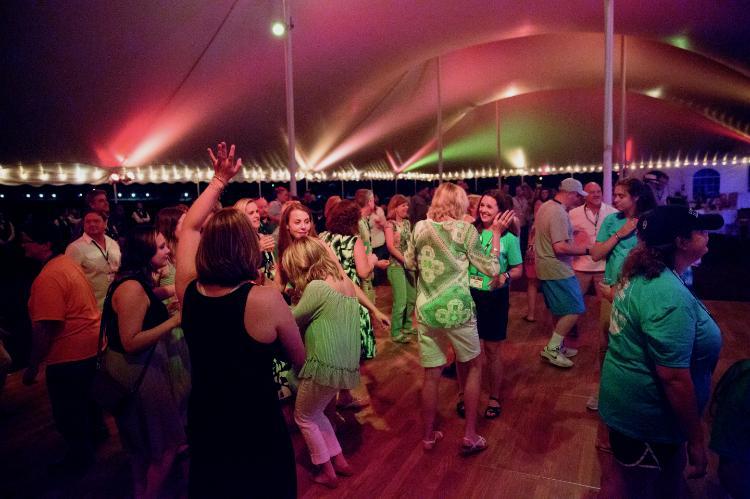 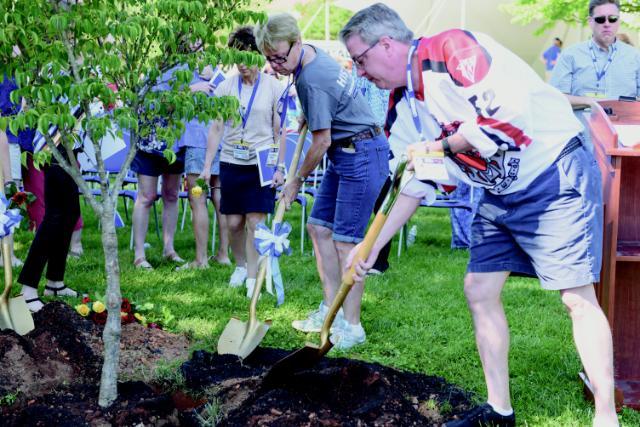 Stephen Wertz ’88 and Suzanne DuBose ’83 help plant a tree as part of a Sunday memorial service to remember Longwood alums who died in the last year. 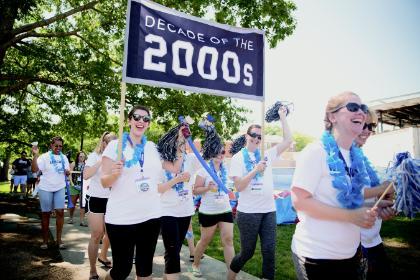